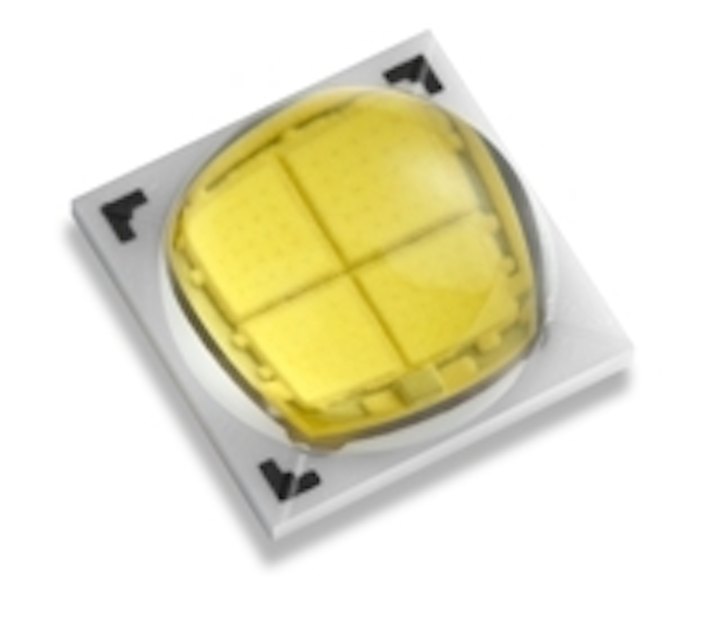 Philips Lumileds formally announced the Luxeon M LED, that includes an array of four emitters, and that has already been specified for use in street lights. Cree has added to its third-generation LED platform with new high-voltage XLamp XT-E and XM-L LEDs that are optimized for small driver size and small solid-state lighting (SSL) applications such as retrofit candelabra lamps. Both companies have new mid-power LEDs that utilize plastic packages yet target general-lighting applications.

The Philips Lumileds Luxeon M is designed to simplify luminaires designed for street- and area-lighting, and industrial applications by enabling the use of fewer components. Indeed the packaged devices with four emitters can output as much as 1100 lm depending on color temperature.

The input voltage for the LEDs is typically 11.2V â the sum of the forward voltage of the four series emitters. That mid-level voltage can also simplify driver design by eliminating the need for the greater voltage drop needed to power a single large emitter at 3-4V.

"Everything from the footprint to the drive requirements has been optimized based on hundreds of discussions with our customers, municipalities, and private property owners to ensure that Luxeon M exceeds their expectations and objectives," said Rahul Bammi, vice president of marketing for Philips Lumileds.

Philips will offer the LEDs in 3000K, 4000K, and 5700K CCTs, and with a minimum CRI of 70. The LEDs are hot tested and binned at 85Â°C. Distributor Future Lighting Solutions has the component in stock.

Cree, meanwhile, continues to build out an LED portfolio on what the company is calling its third-generation, silicon-carbide manufacturing platform that has been branded SC3. The new XT-E and XM-L LEDs deliver 22% more lumens than previous products in the same family, maxing out at 647 lm in cool white at 6W.

The new Cree LEDs use the same top level product designators as similar HV-LED products announced last October, although the new versions bring the aforementioned brightness advantage. Cree fabricates the LEDs as a single die and then segregates the single die into an array of series-connected emitters in the back end of the manufacturing process. You can see the array of 16 emitters if you carefully examine the nearby photo.

The array allows the LEDs to operate from 48V inputs greatly simplifying the driver design by minimizing the drop from line-voltage level. That high-voltage characteristic will enable usage of the LEDs in small SSL applications indoors and out.

The XT-E LEDs are designed to be driven at 3W and deliver 275-357 lm depending on color temperature. The 6W XM-L family outputs 555-647 lm. The products share the same manufacturing technology platform as the new smaller XB-D family announced in January and the standard-voltage XT-E LEDs announced in February.

Cree and Philips have both announced new mid-power LEDs as well. Mid-power is a relatively new category of products that use plastic packages more akin to LEDs designed for display backlight applications, but that offer better color quality and longer life. Ella Shum, director of the LED practice at analyst firm Strategies Unlimited, characterizes mid-power LEDs as operating in the range of 0.1-0.5W.

Philips Lumileds, for instance, is specifying CCT, CRI, and the R9 CRI specification (for the saturated red color sample) for its mid-power 5630-family emitters. These are Philips' first mid-power LEDs designed for general illumination applications and the company says that it has applied its phosphor and other technologies from higher-power LEDs to the new class. Philips' Bammi said, "We believe that many of the mid-power solutions being implemented today will see unplanned and unexpected color shift over time and we think the industry needs better LEDs."

Also in the mid-power class, Cree has announced the ML-C and ML-E LEDs. The ML-C LEDs operate from 6.4V input and the ML-E from 9.6V input â indicating two- and three-emitter arrays respectively. Cree says that the products are a fit for linear fluorescent retrofit lamps, decorative lighting, and specialty applications such as in emergency vehicles. The ML-C LEDs deliver 31-37 lm depending on CCT.