Art lives from the diversity of structures, colors and sizes, and just as diverse are the professional lighting tools that impressively display exhibits. Exchangeable lenses for implementing a variety of light distributions are predestined for adapting existing lighting systems with minimum effort. 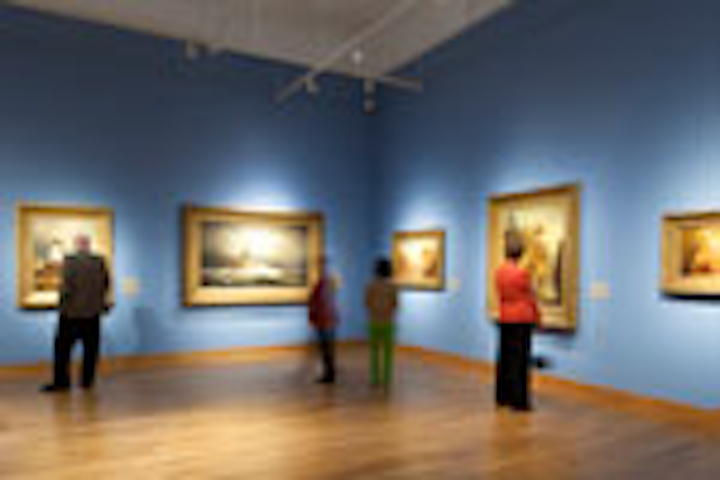 Art lives from the diversity of structures, colors and sizes, and just as diverse are the professional lighting tools that impressively display exhibits. Exchangeable lenses for implementing a variety of light distributions are predestined for adapting existing lighting systems with minimum effort. Spotlights precisely dimmed for dramaturgical and conservational needs create a flexible infrastructure for the impressive presentation of art and culture with light.

It is not only artists that select individual strategies for fascinating observers, allowing them to contemplate or even provoking them. Curators also handle atmospheres in their exhibition spaces sensitively and in a differentiated way when displaying and interpreting exhibits with light. If an exhibition changes, in most cases the form of presentation then also changes, which in turn requires a different lighting concept. If for example a cool white cube with wallwashing dominates in an exhibition, the next show may require a dark ambience with dramatic accenting using very narrow light cones. To keep a control on costs with such retrofitting, lighting needs to take this variability into account, and this requires simply exchangeable light distributions on the one hand and convenient controllability on the other. Because LEDs emit light in a different way to conventional light sources, a new luminaire concept has become available where the optic is aligned on a tool-free lens change element, thus enabling light distributions to be quickly and simply modified according to the needs of the various artworks. A system consisting of three elements has established itself as being flexible, efficient and with safe handling: a silicone lens on the LED chip, a collimator for light-bundling purposes and an exchangeable Spherolit lens.

A primary optic on the LED chip

The lens on the semiconductor not only reliably seals the LED chip but as the primary optic achieves uniform light distribution in the hemisphere above the PCB. For most museum lighting applications though this very wide light distribution is not suitable, because typical accent lighting for sculptures requires variously narrow beams of light, or uniform wallwashing needs precise asymmetrical light distributions for displaying paintings on walls. To ensure this high level of flexibility for exhibition presentations, ERCO has developed a system whereby a further optic concentrates the light and an exchangeable tertiary optic then allows quick adaptation of the light distribution.

A collimator as secondary optic

The collimators emit the LED light in a parallel beam to enable the desired light distribution characteristic to then be generated by the tertiary optic. In practice this approach offers the advantage that if the application changes, the distribution of light can be modified to the particular lighting task via an exchangeable system. The collimating of the light rays is implemented according to the specific collimator via total reflection on the sides or in combination with a central lens. Total reflection achieves light control with practically no spill light, thereby offering optimum efficiency.

The actual light distribution, for example narrow for accent lighting or wide flood for floodlighting, is defined via the Spherolit lens as the tertiary optic. Spherolit technology is based on the resolution of a large lens surface into individual, three-dimensional convex zones that guide the light via refraction. The characteristic of a lens is extensively controlled by the individual shape of the spherolites. The ingress of the parallel light is more or less widely spread out according to the curvature of the individual sections. The result is lenses having the same basic geometry but differing via their various beam angles, ranging from narrow spot to extra wide flood. Asymmetric spherolites also enable an oval light cone or wallwashing. All have the common characteristic of maximum quality of light, because the light cones are especially homogeneous, without bands and with a clean and slightly soft-focus edge.

Exhibits vary widely in terms of size and format, and lighting must respond to art in a simultaneously diverse way. For this reason various light distributions are indispensable for museums and galleries. This requirement not only comes from the various display methods but also due to economic considerations. A narrow light cone for example not only reduces energy requirements to a minimum for illuminating artworks, but also saves energy costs from additionally lighting the surroundings. With exchangeable optics as accessories museums also no longer need to stock a range of different luminaires with differing light distributions, but instead merely need a drawer for storing alternative lenses. Simple, tool-free lens replacement enables the light distribution to be quickly modified to suit minor changes in exhibitions, for example from accent lighting to wallwashing. A uniform system of beam angles across all spotlight families also helps in the selection of suitable lenses for accent lighting, floodlighting and wallwashing.

Narrow spot light distribution with a beam angle of less than 10° is suitable for accenting small objects with high light intensity or with wide distances between the luminaire and the object. With this narrow concentration of light a high level of illuminance is generated even at low wattages. With LED spotlights with narrow spot characteristic, 4W for example is sufficient to generate illuminance of 100fc at a distance of 12ft. A particular benefit of narrow light distributions is high visual comfort because there is hardly any direct glare. For larger exhibits, spot light distribution with a beam angle of 10° - 20° or flood with a 25° - 35° beam angle are suitable.

Wide light distributions are predestined for displaying large artworks or exhibits in the context of their specific space. These distribution patterns include wide flood with a beam angle of > 45° and extra wide flood with > 80°. The wide light cone enables wide luminaire spacing to be implemented, which in turn cuts investment costs. However, direct glare that is stronger than with narrow light distribution is a disadvantage.

Possibilities for floodlighting large art objects include rotationally symmetrical floodlights and axially symmetrical floodlights that generate oval light cones. These are able to efficiently illuminate vertical or horizontal exhibits with linear shapes. Instead of two or three spotlights with narrow light distribution, a single floodlight with oval flood characteristic is sufficient. Furthermore, with slender objects such as columns, the illuminance is concentrated on the object via the oval light cone, which avoids any disruptive brightening of the areas around the object as would be caused by wide or extra wide flood light distribution. For freely rotating the alignment of the oval flood light distribution, a round luminaire head with round Spherolit lens is recommended instead of a rectangular luminaire with a square lens that can only be adjusted in a 90° angle.

The uniform floodlighting of walls is ideal for displaying pictures on walls that should not be emphasized individually but as a single unit with the architecture. Exhibitions benefit from highly harmonious and uniform distribution of brightness with the wallwash Spherolit lens both in the vertical and horizontal planes. For the more sophisticated asymmetrical light distribution, the microstructure of this lens has a complex form optimized with computer simulation by the lighting engineers.

Standard point light sources commonly used in the past emitted their light at a spatial angle of almost 360°. In contrast, LEDs are pre-aligned and emit light at a spatial angle of less than 180°. This enabled redesigning the optic of LED luminaires to achieve more efficiency. For spotlights, ERCO decided to implement Spherolit lenses because these not only allow a more convenient and reliable modification of light distribution if the exhibition situation changes, but they also achieve higher efficiency. Also, with projecting optics losses caused by spill light or light emitted in the direction of the socket are avoided, and the higher transmission efficiency with lenses compared to reflection with reflectors achieves a higher light output ratio that results in higher luminaire luminous flux. LED wallwashers with Spherolit lenses therefore have around twice the luminaire light output ratio (LOR) of previous lens wallwashers equipped with conventional lamps and reflectors. Ultimately, for museum operation it is decisive how much light impacts on the object with minimum energy expenditure to ensure economical operation. In addition to the lighting technology, controllability also provides valuable potential for optimizing operating overheads.

When designing exhibitions, curators and managers often express the desire to dim either individual spotlights or the complete lighting system. This request is frequently based on the following three aspects: 1. For dramaturgical purposes both the individual spotlights for illuminating the single artworks and the complete system should be dimmable. 2. For conservation reasons, the illuminance should be specifically settable for the individual artworks. 3. Energy considerations dictate that the brightness level should be adaptable via daylight sensors or occupancy sensors. A potentiometer on the spotlight has proved to be very useful for individually and precisely setting the lighting level, and as a result finely adjusted brightness levels are possible without complex controls. Dimming the complete lighting system is implemented via external dimmers on the phase. The common standard of dimming either only via the potentiometer or only over the phase has frequently led to limitations in exhibition practice, and for this reason ERCO has developed new control gear that enables a combination of dimming both via the potentiometer and via the phase. This enables illuminance levels to be set for each artwork, and following that the complete exhibition can be dimmed further for scenic or energetic reasons. This technology also features a high level of safety with regard to conservational aspects; conservators are able to individually set maximum illuminance on the spotlight via the potentiometer for the artworks. If other museum employees even only temporarily set the phase to a maximum level, the illuminance does not increase beyond the predefined values of the potentiometer. 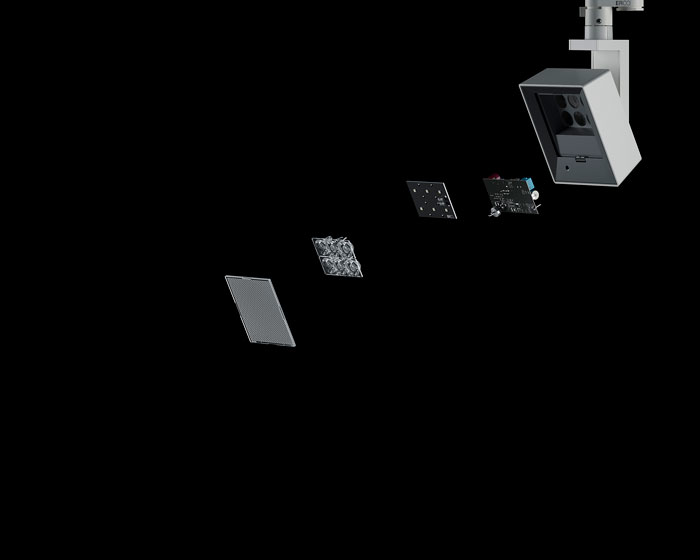 The system consisting of primary, secondary and tertiary optics is a modular kit for a wide diversity of accenting, floodlighting and wallwashing. The control gear and luminaire housing with thermal management are ideally matched to the digital lighting technology. Image: © ERCO GmbH, www.erco.com 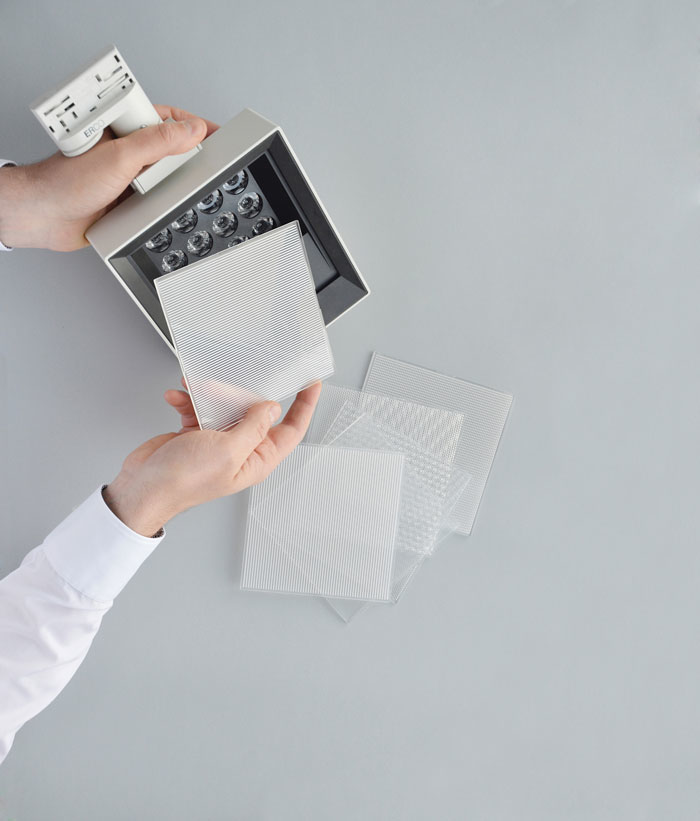 Dr. Thomas Schielke studied architecture at the Darmstadt Technical University, Germany. He has worked for more than ten years as editor for didactic communication at the luminaire manufacturer ERCO and is co-author of the textbook "Light Perspectives: Between Culture and Technology".

Interpreting art with light: museum lighting between objectivity and hyperrealism