The German automaker has announced that later this year it will offer Matrix LED headlamps with individually-controlled LEDs that adapt to oncoming traffic sensed by a camera and to road topography data supplied by a GPS system. 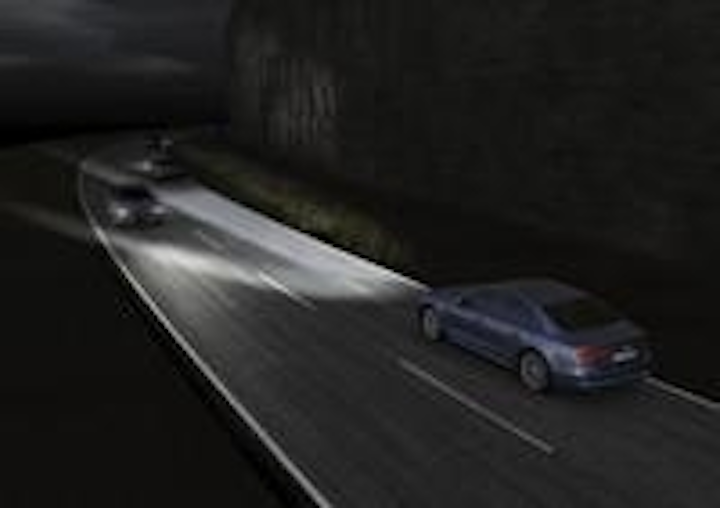 Audi has announced that the new A8 sedan due later this year will feature a new Audi Matrix LED headlamp that will increase driving safety via real-time control of the forward light patterns based on traffic and road data. The intelligent system will use GPS data to optimize the lighting for the A8 driver, and forward-looking cameras to minimize the light shone directly at drivers of oncoming vehicles.

The Matrix design utilizes 25 LEDs, arranged in five groups of five LEDs with each group mounted within a reflector. The control system can dim or switch individual LEDs in real time to adapt to the conditions at hand and optimize the driver view without any mechanical moving parts.

The headlamps will adapt to oncoming traffic based on a camera. And as the nearby photo illustrates, the lights will put plenty of light on the road for the driver to see while leaving a dead spot in the beam that is matched to the passenger compartment of the oncoming vehicle. As the range of the oncoming vehicle decreases, the system further dims or extinguishes parts of the matrix. When the other vehicle passes, the system brings the lights back to full power immediately.

Meanwhile, the system also controls the headlamps to enhance the driver's ability to safely navigate corners and other road features. For instance, data from the GPS system would move the beam in the direction of a coming curve in the road just before the driver would have to begin turning the steering wheel. Audi calls the feature a cornering light function.

The control system is enabled automatically, assuming the driver sets it to automatic, based on the location or type of road where the car is driven and the speed of the vehicle. For instance, in city driving, determined by the GPS, the system engages at 60 km/h (37.28 mph), or in highway driving at 30 km/h (18.64 mph).

The automaker also claims that the LED headlamp design will in generally deliver superior light to competing designs. The company said that the lights "produce a quality of light with a special crystalline sheen."

Audi has been at the forefront of LED headlamp technology, announcing its first all-LED headlamps in 2008. The company also said that it is using LEDs in other ways to boost vehicular safety. For example, the new A8 will include LED turn signals that stagger blocks of LEDs at 150-msec intervals to make the indication of a turn more noticeable.