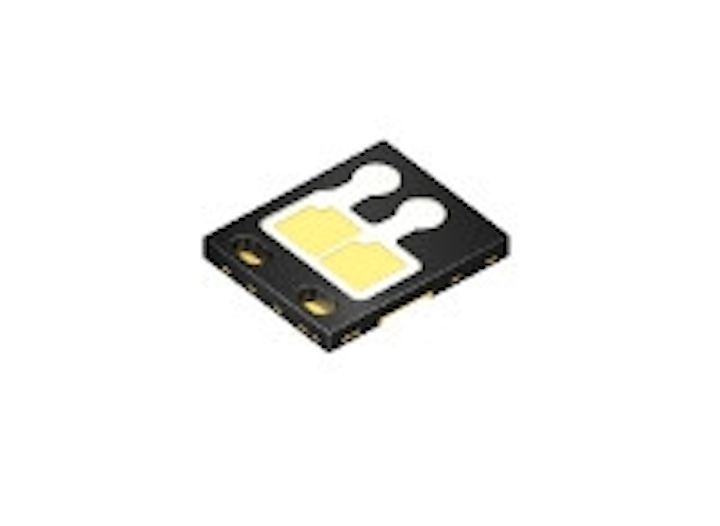 Osram Opto Semiconductors has announced two new LED families for forward-facing automotive exterior lighting applications including headlamps. The Oslon Black Flat family is a compact design in a surface-mount-technology (SMT) package that can be soldered directly to printed-circuit boards (PCBs). The Ostar Headlamp Pro family includes five emitters and targets usage in adaptive headlight scenarios where individual LEDs can be extinguished or dimmed based on traffic and road conditions.

The new Oslon Black Flat LED is a follow on to a 270-lm (at 1.2A) LED announced last year using the same name. The new two-emitter design can deliver 500 lm at 1A.

The LED is based on Osram's UX:3 thin-film flip-chip manufacturing platform that the company has used since 2011. The new two-chip device measures 3.1×3.75 mm, and the slim design allows flexibility for usage in a variety of forward-facing lighting applications.

The SMT package will also enable broad usage because it enables simple, low-cost assembly and is handled similarly to other electronic components. "This soldering capability enables integration of the LED into a simple, standardized process and reduces the complexity of the processing steps, which saves a good deal of time and costs," said Martens.

The new Osram Ostar Headlamp Pro products, meanwhile, target what the industry often refers to as Advanced Forward Lighting Systems (AFS). As we discussed previously, Osram has supplied earlier versions of the product to the German Federal Ministry of Education and Research (FMER) research project on AFS.

The new version of the LED enables individual control of the five emitters. The control comes via the connector integrated onto the LED that is easily visible in the photo. Individual control is needed for applications such as the Audi Matrix headlamps that were recently announced. When asked if Audi was using the Ostar product in Matrix, an Osram spokesperson said that the company can't comment on customer activity.

"Intelligent headlight systems with our light-emitting diodes give drivers optimal vision even on the edges of roads or with other vehicles approaching, offering better protection from possible accidents," said Martens. "Thanks to the five individually controllable chips, more than one road user can be concealed from view and the intermediate area is still completely illuminated."