The City Lights competition to design a new streetlight for the City of New York was won by an entry utilizing LED lighting technology. 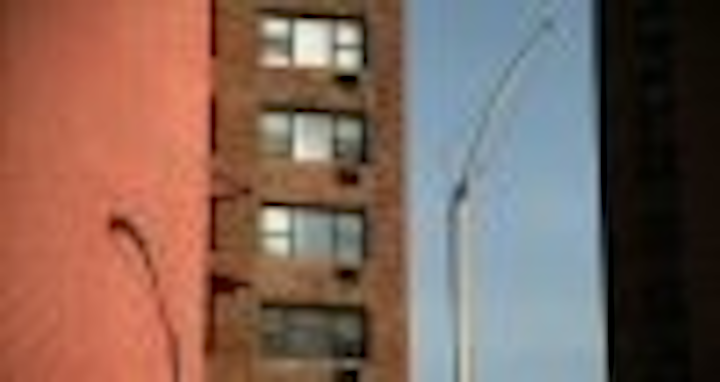 In early 2004, the City of New York launched an international design competition for a new streetlight. Over 200 anonymous entries were submitted from 23 different countries.

The winning design, which used LED technology, was selected by a jury from 3 finalists, and was created by architects Thomas Phifer and Partners and Office for Visual Interaction, Inc. (OVI), an architectural lighting consultancy based in New York City.

The winning streetlight design and its variations will be used to light streets, sidewalks, and parks within the New York City's five boroughs. The design challenge facing the competitors was to "create an innovative, state-of-the-art design that responds to the unique diversity of the city's architecture and urban landscape while meeting the appropriate technical performance standards". The competitors were also asked to create an imaginative, cost-effective, and enduring design.

The lighting solution for the new streetlight combines current hi-flux LED technology with state-of-the-art lensing optics in a small, slim, oval-shaped profile, which provides the structural framework and heat sink for the LED modules.

"The luminaire component is an integral element which shaped the design, and not an 'add-on'," said Enrique Peiniger, a principal and co-founder of OVI. "The use of LEDs allowed a lot of design flexibility and the ability to make the luminaire small."

The result is a significantly different from the standard "cobra head" luminaire. An oval profile was preferred to maximize the surface area available to provide heat sinking for the LEDs.

Within the luminaire, linear arrays of LEDs are grouped into 4 segments. Each 16-LED segment has an optical lens that incorporates light-shaping film diffuser technology to achieve the required light distribution pattern.

The design of the luminaire is modular to allow interchangeability of components between the various streetlight configurations (e.g. long and short arm versions, as well as the park/pedestrian light configuration).

The use of LED technology was a challenging task, said Jean Sundin, a principal and co-founder of OVI, even though LEDs are becoming more efficient over time and offer considerable benefits. "The life of LEDs exceeds 50,000 hours, and LEDs offer better color rendition than high pressure sodium," she said. "Also, LEDs require minimal maintenance, have low wattage consumption and are very small and lightweight, which enables a range of design possibilities."

Furthermore, LEDs contain no mercury and do not produce any harmful ultraviolet light. "Also, LEDs are robust and not susceptible to vibration inherent in roadway applications," added Sundin.

LED Specialists, which specializes in the design and integration of high-brightness LED technology for illumination applications, was brought in by OVI to help develop the LED elements and driver subsystem.

Using lighting specifications from the city, OVI and LED Specialists determined the type, quantity and configurations of LEDs needed to both meet the illuminance requirements and fit within the architectural/mechanical design on the complete street light system.

As Mike Fusco, president of LED Specialists explained, there was "give and take" in the design process to arrive at the best integrated solution. "Lighting simulations were performed to ensure coverage area requirements were met," said Fusco. "This was particularly challenging because we had a linear arrangement of LEDs going the length of the long and narrow luminaire, yet had to spread the light orthogonal to this direction to cover a specified section of the road."

LED Specialists also determined the requirements for the electronic driver modules that provide power and control to the LED modules.

The segmented/modular luminaire design streamlines manufacturing and handling, and is inherently interchangeable to accommodate the next generation of LED technology available to the market, said Sundin. In the future, it will be possible to swap out the LED modules with another segment that may have fewer LEDs with higher power, for example. "Rather than outdating itself in 10-20 years, the proposed LED solution will be able to evolve with current technology and improve with age, becoming less costly and consuming less energy over time," said Peiniger.