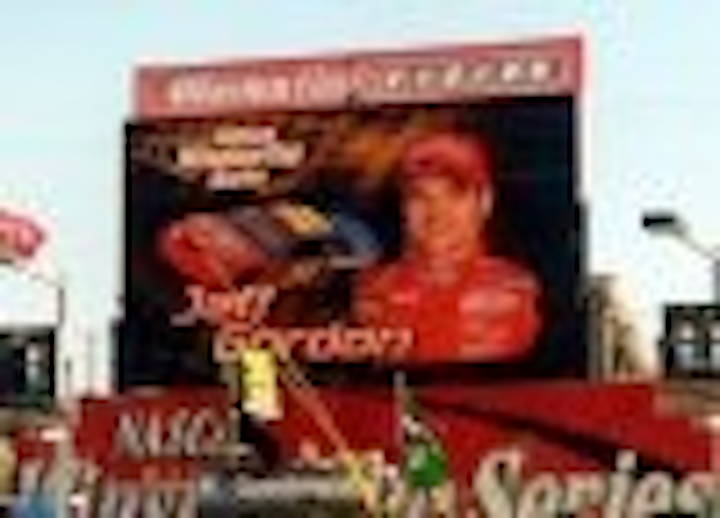 Digital signage has only been around for about thirty years - not a long time in comparison with electric signage in general, which has been with us for over a century. Yet in this relatively short time, LED signs, one of the key players in the digital signage arena, have emerged as a major force in sign markets, primarily due to their low maintenance and programmability.

Though novelty is rife in the LED signage industry, LED signs can still be placed in three general categories: channel letters, message reader boards, and large-format video-screen displays. LED signs are making headway on each of these fronts. They have already all but extinguished large-format outdoor video screens powered by cathode-ray tube (CRT) technology in little more than a decade - a shift most evident in the nearly wholesale replacement of sports stadia CRT screens by LED screens (see graph).

Incandescent-based message reader boards have suffered a similar fate. While neon is still the lighting technology of choice for channel letters, LED channel letters are becoming increasingly popular alternatives. The further success of LEDs in this sign format depends on the prices and performance capabilities of non-red LEDs being on par with their red counterparts.

A prominent displays magazine, Signs of the Times, documented in its July 2004 issue the popularity of the various forms of signage illumination from 2000 through 2003. According to the magazine's survey, interest in older forms of lighting for signage illumination has waned over the past few years, while interest in LEDs has steadily increased. LEDs were the only form of sign illumination that rose in popularity each year during the three year period covered by the survey, gaining ground in an otherwise stagnant market. (The survey indicated that LEDs were used in 7.2% of signs in 2003, compared with 46.3% for fluorescent and 41.7% for neon.)

The LED market as a whole is booming, and is expected to grow by more than 50% by 2007. Nichia, Cree, and other LED manufacturers enjoyed record sales in 2003. LEDs for signage applications, which account for approximately a quarter of the LED market, will share in its growth: their current estimated value of $625 million will likely increase to $1 billion within the next few years.

The growth of LED signs will be by no means equally dispersed across the spectra of signage markets - their high brightness and relatively low resolution make them most appropriate for outdoor applications. Further specifying their niches are LED signs' programmability and graphic, color, and animation capabilities, all of which are useful to commercial vendors for conveying noticeable, memorable, and targeted messages to consumers.

LED signs will most fully realize their potential in the areas of on- and off-premise promotional signage. Their growth in these segments will be staggering; we expect it to resemble the saturation process of US stadia and arena shown in the figure. The number of electronic billboards, virtually all of which are LED-based, is clearly growing; just about every LED sign manufacturer produces these displays. The electronic billboard market has great potential in terms of both quantity of product sold and market value, the most promising area being sign replacement. Bob Klausmeier of YESCO predicts that over 1000 electronic billboards will be sold in the United States by 2009.

Although electronic billboards are often more spectacular and pricey than their on-premise counterparts, the number of on-premise signs and the consequent market value of the on-premise segment are much greater due to a larger number of installation sites and fewer zoning restrictions. What on-premise promotional signage lacks in spectacle it makes up for in volume. We expect the market value of on-premise LED signage to top the US$3 billion market within a decade, and to continue rising.

LED signs are more than electronic versions of their static counterparts. Their programmability allows for targeted marketing and interactivity, and, like websites, they can be networked and updated remotely with fresh, topical content. These features of LED signage may one day seem indispensable to the majority of commercial end-users, as computers now seem indispensable for businesses of virtually every size and type. The market is open and the products readily available; widespread application of LED signs could transform the nature of outdoor commercial signage.

Intertech Corporation has released a report that details the rapid rise of LED signage, sketches its likely future, and makes recommendations to those interested in the LED signage industry. The report is entitled LED Signage: Opportunities in Commercial Applications, and is available in hard copy or on CD. To obtain more information on the report, or to order a copy, visit http://www.intertechusa.com/ledsignage.htm or contact Intertech's Chuck Spear at USA+207-781-9612.