Over 270 outdoor LED luminaires will be installed in Kolkata, India, in order to evaulate their performance as part of the global LightSavers program. 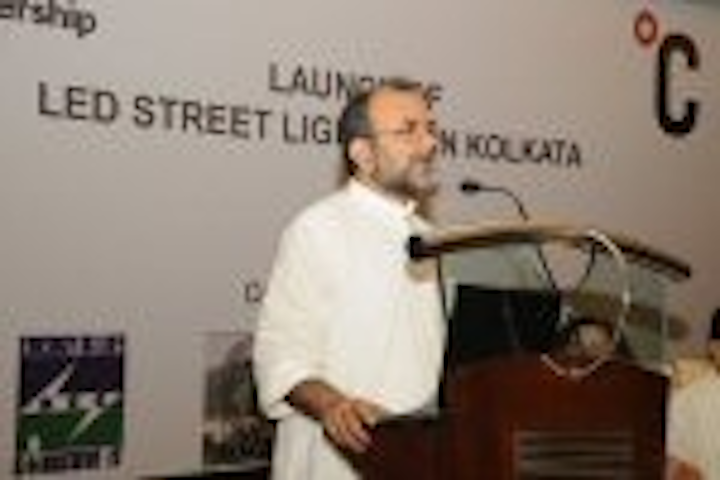 Under the mentorship of The Climate Group’s Global LightSavers initiative, the Kolkata Municipal Corporation (KMC) in Kolkata (formerly Calcutta), India, has unveiled an extensive LED pilot project. This will involve an initial installation of 273 LED luminaires from Lumec, a Canadian company that is now part of Philips.

The project will evaluate the performance of LED luminaries with respect to illuminance, uniformity, color temperature, durability, longevity, and color shift over 2-3 years.

The LED luminaires will be installed on 8 different streets in Kolkata, with road widths between 20 and 25 feet, a 25- to 30-meter spacing between poles, and a mounting height of 7 meters.

In launching the pilot, Kolkata is teaming up with 10 other cities around the world including New York, London, Toronto, and Tianjin, China, which are all participating in the first phase of The Climate Group’s LightSavers program.

A further LightSavers pilot will be launched shortly in Hong Kong – with trial sites set to be unveiled at The Hong Kong University of Science and at Hong Kong International Airport.

LightSavers is funded by the HSBC Climate Partnership, which supports The Climate Group's pioneering work to create cleaner, greener, more prosperous cities. These global LED testing projects will provide data, independent from manufacturers, to demonstrate the performance of LEDs, which will help develop a framework for considering wider use of the technology.

“We have been trying to change for some time now and attitudes take a long time to change,” said Mr Bikash Ranjan Bhattacharya, Mayor of KMC, adding “This pilot will go a long way in inculcating energy conservation efforts in the rapidly growing city.”

The Climate Group’s Aditi Dass said: “This groundbreaking LED trial holds huge potential for Kolkata, and puts them among a group of global cities that are leading the world in the demonstration of this key technology. Not only do LEDs have the potential to substantially cut emissions and reduce costs, but they can also bring with them a range of other important benefits that will make Kolkata more liveable, improving people’s lives. We are delighted to be working with The Kolkata Municipal Corporation and our other forward thinking partners on this exciting project.”

Pilot projects internationally have so far shown a reduction of 40-50 per cent in electricity use when LEDs replace HPS lamps, and savings of up to 70 per cent when LEDs are used with smart controls. The project is being carried out in joint collaboration with the Government of India’s Bureau of Energy Efficiency (BEE), the West Bengal State Electricity Distribution Company Ltd (WBSEDCL), and the West Bengal Pollution Control Board (WBPCB), with overall facilitation by The Climate Group (www.theclimategroup.org).

“Kolkata has always been at the forefront in adopting the latest global trends, especially in the provision of services to the public at large.” said Mr. Sushil Kumar Sharma, Member, Mayor-in-Council, Lighting and Electricity, KMC, adding, “I am confident this pilot, in promoting energy-efficient LED street lighting, will be a beacon to guide green practices for times to come.”