Barco has provided LED products for the latest tours by George Michael and The Who, while a Daktronics display has been incorporated into a giant PlayStation. 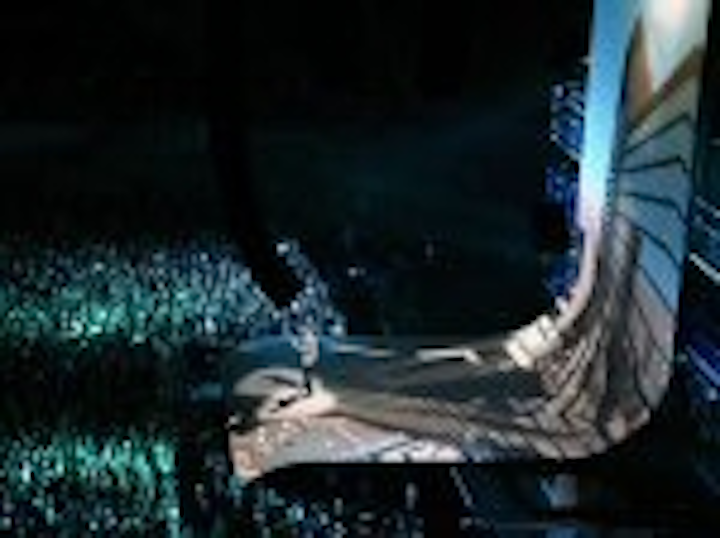 Barco LED modules set the stage for George Michael
Creative LED specialist Barco has supplied 3000 of its MiSTRIP LED modules to form a highly unusual stage backdrop for George Michael's 25 Live Tour. The modules, playing video and graphics effects, form an unprecedented curved display of LEDs behind and underneath the performer.

A massive 9 meter wide and 25 meter long screen was designed for the tour. This giant backdrop flows onto the stage and beyond via both concave and convex curves to create a stunning visual element, strong enough to be both stood and danced on.

Phil Mercer, project manager of XL Video, the company that provided the set, said the project was very ambitious, and required extremely high resolution. "We were worried that it would not be achievable as we expected problems with the weight and reliability because of the high number of LEDs needed to reach this resolution," he says. "However, this proved to be no issue at all for the MiSTRIP. It has stood up really well to the demanding tour schedule and fulfilled a very exacting design brief."

The MiSTRIP is a linear LED screen element, essentially a “strip of pixels”, that can be combined in any shape and quantity to make up any size and form of LED screens. Despite its sleek appearance, the MiSTRIP is structurally very strong, which made it ideal for Willie Williams’ design for the George Michael tour.

The modularity of the MiSTRIP system and special mechanics developed for the show allow the lower rear part of the screen to open up, an unexpected entrance for the artist onto the stage!

All screens have the freedom to move both horizontally and vertically. They can be combined into a single seamless 45-degree cinemascope screen, or five individual panels at various angles, or a configuration that combines a three-panel widescreen flanked by two single panels.
Latest in Backlighting Signs & Displays