Over a five-year period, the City of Los Angeles' Bureau of Street Lighting will replace 140,000 existing streetlight fixtures in the city with LED units. 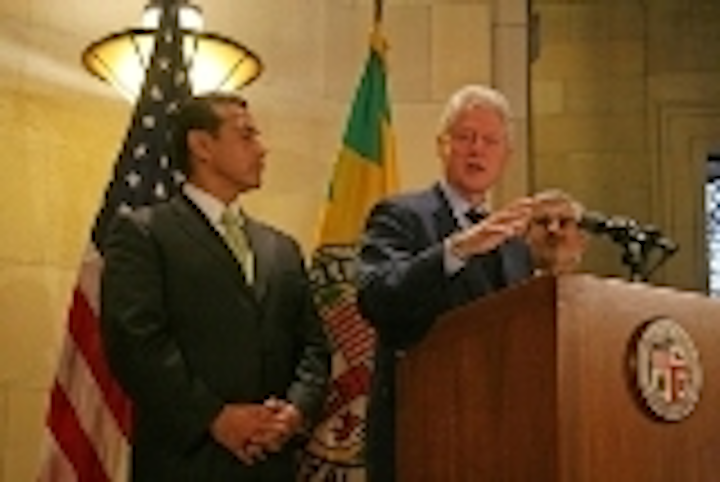 On February 16, former President Bill Clinton announced that the Outdoor Lighting Program of the Clinton Climate Initiative (CCI) is working with Los Angeles on the largest LED street lighting retrofit project ever undertaken by a city to date, said a report by the CCI.

Over a five-year period, the City of Los Angeles' Bureau of Street Lighting will replace 140,000 existing streetlight fixtures in the city with LED units that not only will improve LA's lighting quality and reduce its electricity use, but also will help the city to save money in the process.

While typical streetlight lamps will last from four to six years, LED fixtures have a longer life span, estimated from 10 to 12 years. The new, white-light LED streetlight units are more durable and damage-resistant than other technologies. This not only will reduce the frequency and cost to repair streetlight fixtures, but also will provide LA with considerable savings in labor and material.

The improved equipment life also means that fixtures will more reliably light streets and sidewalks for city residents. In addition, LA is committed to using LED fixtures that will ease what is known as sky glow - the artificial illumination of the night sky.

"If you have ever been to Death Valley National Park and looked up on a clear night, you would see that the stars seem to be dimmer than they were when I was a child. But they are not getting dimmer, really - the rest of the sky is getting brighter because of all the lights from Los Angeles and Las Vegas and other surrounding cities and communities," President Clinton said. "Now, thanks to the work of Mayor Antonio Villaraigosa, the Los Angeles Bureau of Street Lighting, and my Foundation's Climate Initiative, the stars over Death Valley may again shine more brightly."

Once this overhaul is fully complete, LA will save electricity expended on street lighting in the city by a minimum of 40 percent and reduce carbon emissions by approximately 40,500 tons a year, which is the equivalent of taking 6,700 passenger vehicles off the road every year.

Over a seven-year period, the city will save a total of $48 million and reduce carbon emissions by 197,000 tons. After the loan is repaid in seven years, LA will continue to save $10 million annually as a direct result of this lighting retrofit project. In addition, this loan will have no adverse impact on the city, as the loan payments will be covered in full by savings from current energy and maintenance costs.

This LED retrofit project also will include the installation of remote monitoring units at all 140,000 streetlights replaced in the city. These devices will automatically report streetlight failures directly to the Bureau of Street Lighting for immediate repair, thus enabling its staff to optimize its maintenance services.

"If every city followed the example of Los Angeles and reduced the electricity used by their streetlights by 50 percent, it would be equivalent to eliminating over 2.5 of those coal plants per year," President Clinton said. "We would do that while saving taxpayers money. And by doing that, we would also reclaim our night sky."

CCI's Outdoor Lighting Program works with partner cities to improve the energy efficiency of street and traffic light systems through a combination of technical, purchasing, and project assistance.