Zumtobel will light huge London soccer stadium, but not the field

Q: When is a lighting partner not a partner? A: When it hits the roof at Tottenham Hotspur's mega sports and entertainment complex. 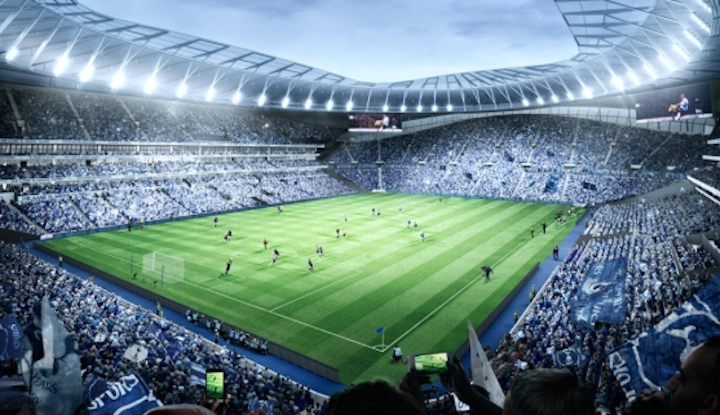 Q: When is a lighting partner not a partner? A: When it hits the roof at Tottenham Hotspur's mega sports and entertainment complex.

When a leading vendor like Zumtobel Group announces that it is the new stadium “lighting partner” for a major sports team like London soccer club Tottenham Hotspur, one might reasonably assume that Zumtobel will illuminate the playing field at the 61,559 seater, which is scheduled to open next year.

Interested in articles & announcements on LED lighting for sports & entertainment?

But with all the new roles that LED lighting can play at a modern sportsplex, it seems that there is plenty of latitude to be a partner without providing what the average Joe thinks of as stadium lighting, long symbolized by the iconic stanchions poking above ballpark rooftops.

"We are very pleased to be able to illuminate the new Tottenham Hotspur stadium with our product solutions and to help shape the fan experience through our lighting,” said Zumtobel senior vice president Paul Coggins in trumpeting the new partnership. 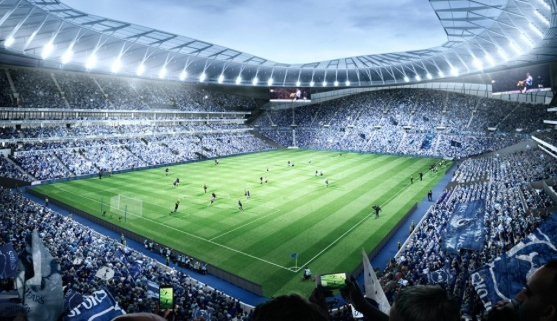 The key phrase in Coggins' remark is “fan experience.” Zumtobel provided no detail of exactly what that means. It will install a mix of LED lighting that presumably not only makes it easy for fans to find their way around, but also changes colors and patterns to reflect different events, activities, and atmospheres. The stadium will also host concerts and American football games.

“Tottenham Hotspur has commissioned the Zumtobel Group to design and develop the lighting across its new stadium including player facilities, seating bowl, circulation concourse, and the extensive façade,” Zumtobel said in a joint press release about its partnership at what it called the “state-of-the-art” facility.

LEDs Magazine asked Zumtobel to elaborate on the lighting design, and whether it will include smart controls to help dynamically alter settings.

“We are not able to share any details on the products/controls yet,” a spokesperson for Zumtobel's, Thorn Lighting said. UK-based Thorn is one of several Zumtobel companies that will supply Tottenham with LED lighting and controls. The others are acdc, Reiss, Thorn, Tridonic, Zumtobel brands, as well as Zumtobel Group Services “to deliver sophisticated and intelligent lighting solutions,” the company said.

“Each brand will be taking on their area of expertise to supply the mentioned interior and exterior parts of the stadium,” the spokesperson added. “As the official lighting supplier of Tottenham, we will deliver a holistic intelligent LED solution to the stadium.”

Whatever “holistic” means, it does not include the field, or “pitch” in Britspeak.

“We are not lighting up the pitch/playing field,” the spokesperson said.

Zumtobel told us to ask Tottenham, a team popularly known as “Spurs.” So we did. After nearly a week of back-and-forth emails, a team spokesperson told LEDs that he's still looking into it, and promised to eventually let us know. We will update this story accordingly.

The Zumtobel/Tottenham alliance echoes a similar accord in which a US professional football team, the Cleveland Browns, anointed Cree as its lighting partner but bypassed Cree for field illumination. Like with Zumtobel and Tottenham, Cree and Cleveland cited the fan experience as the driver behind new LED lighting schemes at FirstEnergy Stadium.

Back at Spurs' new stadium in London, it's not clear whether the field lights will be LED or a different light source. Although a growing number of major sports venues are switching to LED — a prime motivation these days is to support high-definition television broadcasts — not all new lighting installations are LED.

A year ago, Zumtobel said LED technology was too expensive to justify for stadium flood lighting, as it installed metal halides at major soccer venues in France for the Euro Cup tournament, and as Osram did the same.

The new £850 million ($1.1 billion) Tottenham stadium will feature a number of high-tech and modern touches, including an information technology network from Hewlett Packard, a retractable grass field that can give way to artificial turf, several restaurants and clubs including a Sky Lounge with views of the city and a glass-walled “Tunnel Club,” a microbrewery, a bakery, and what's being billed as the UK's longest bar at around 285 ft.

It also includes a rising single tier of 17,5000 seats at one end designed to enhance crowd noise by creating what Spurs call a “wall of sound.”

“Zumtobel Group is a leading supplier of integrated lighting solutions and we are delighted to announce them as a key supplier for the stadium project,” Tottenham Hotspur director of operations Matthew Collecott said in the joint release. “We have every confidence in their ability to deliver a world-class lighting system as part of one of the most atmospheric and technologically advanced stadiums in the world.”

Spurs promote the stadium, which is still under construction, as a “world-class sports and entertainment destination.”

Tottenham is one of several London teams in England's top soccer league, known as the Premiership. The team expects to begin play in the venue in 2018. The English soccer season typically begins in August. They will play home games at London's Wembley Stadium until their new digs open. They are believed to be seeking £400 million ($522 million) in naming rights.

Such booty might help them afford the upfront cost of LED floodlights.