Far-red spectral energy delivered through a phosphor-converted LED architecture in custom horticultural SSL fixtures has been shown in the lab to deliver increased yield in growing Rouxai red lettuce. 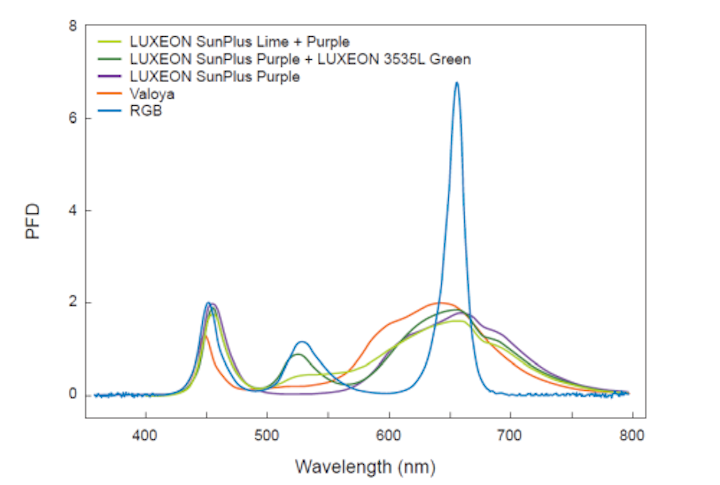 Far-red spectral energy delivered through a phosphor-converted LED architecture in custom horticultural SSL fixtures has been shown in the lab to deliver increased yield in growing Rouxai red lettuce.

LED-manufacturer Lumileds has released the results of recent horticultural LED lighting research conducted at the Lighting Enabled Systems and Applications (LESA) laboratory located at Rensselaer Polytechnic Institute (RPI). The research conducted by senior research scientist Tessa Pocock revealed that the SunPlus horticulturally-targeted LEDs, and in particular phosphor-converted components, could deliver benefits in yield and nutritional value relative to mixes of monochromatic RGB (red, green, and blue) LEDs. The work focused on yield of the red lettuce cultivar knows as Rouxai and used a horticultural lighting arrangement similar to what might be found in a vertical farm.

Lumileds announced the SunPlus family in the fall of 2016 including both phosphor-converted and monochromatic components that span mid- and high-power packages. Among the notable members of the family are the phosphor-converted purple LEDs that are manufactured by using red phosphor on a blue emitter. The lime-green LEDs in the family are also phosphor-converted designs. Lumileds recently added a chip-on-board (COB) purple LED to the SunPlus family. The SunPlus LEDs along with horticulturally-targeted LEDs from Seoul Semiconductor, Osram Opto Semiconductors, and Cree were on display at our recent Horticultural Lighting Conference.

LESA’s Pocock was a featured speaker at the conference and leads the horticultural lighting activity at LESA, which is a National Science Foundation (NSF) lab based at RPI. Other academic partners include Boston University, the University of New Mexico, and Thomas Jefferson University.

A revolution is happening in horticulture. It’s a seismic shift that will change fundamentally how we grow plants — and it’s all down to lighting. The next Horticulture Lighting Conference will take place in Utrecht, the Netherlands from May 14-15, 2018. To find out more information and to register to attend please click here.

For the red lettuce tests, Pocock lit five separate growing chambers with different types of solid-state lighting (SSL). Three of the custom configurations were based primarily on SunPlus LEDs. Those three used lightbars that included:

The tests further included the use of commercial horticultural fixtures from Finland-based Valoya in one chamber. And the fifth chamber used custom lightbars with a mix of monochromatic RGB LEDs. 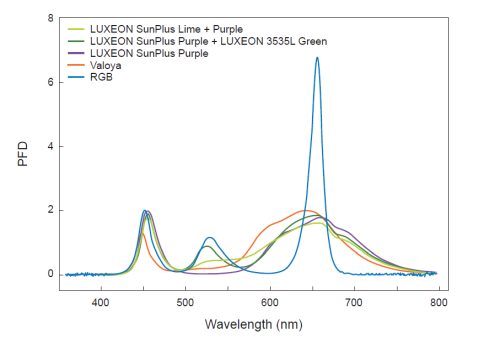 Pocock tuned the five SSL arrangements in terms of spectral photon distribution to produce very similar environments in terms of photosynthetic photon flux densities (PPFDs). For instance, in the photosynthetic active radiation (PAR) range each fixture was to deliver 20% of its energy in the blue (400–500-nm), 20% in the green (500–600 nm), and 60% in the red (600–700-nm) bands. For background on metrics such as PPFD and PAR, see one of our prior feature articles on horticultural lighting.

The PAR PPFD across the five chambers ranged from 217 to 242 μmol/m2s. The spectra did differ to a greater extent in the far-red region outside of PAR from 700 to 800 nm. The monochromatic RGB fixture had no far-red energy. The Valoya fixture generated 19 μmol, while the SunPlus fixtures delivered 25, 28, and 32 μmols respectively in the order of the bulleted list above. The nearby graph depicts spectral photon distribution curves.

For each chamber, the environment was maintained identically. The plants were exposed for a photoperiod of 16 hours each day for 14 days. Temperature was maintained between 18° to 23°C, and relative humidity between 50% and 70%. All were fed the same fertilizer and water.

After 14 days, plants were evaluated for yield based on weight and on measured levels of chlorophyll along with anthocyanin and carotenoid antioxidant agents. In terms of weight, the Valoya, and SunPlus Purple and Lime and Purple and Luxeon 3535L green chambers performed essentially equally and significantly better than the RGB or SunPlus Purple-only chambers. That difference could be attributed to the lack of far-red energy in the RGB case, but the cause would surely be different in the SunPlus Purple-only chamber where surely it was lacking in green energy.

The testing did not reveal any differences in carotenoid levels. The SunPlus Purple and Lime and Purple and green, along with the RGB chambers, delivered significantly higher anthocyanin levels, and the same was true to a lesser extent in terms of chlorophyll.

Lumileds stated that the SunPlus Purple and Lime configuration performed best overall when a combination of yield and nutrient concentrations were considered. And both of the LEDs used in that configuration were phosphor-converted LEDs as previously noted. Phosphor-converted color LEDs tend to have a much broader emission band than do monochromatic color LEDs. For more detail on that topic, refer to a feature article we published on color LEDs a few years back. Lumileds said the SunPlus Purple and green mix delivered strong royal-blue, green, deep-red, and far-red spectra.