Paul-Henri Matha explains how thermal analysis has guided the development of LED headlamp assemblies that will be used across the company's automotive portfolio.

Paul-Henri Matha explains how thermal analysis has guided the development of LED headlamp assemblies that will be used across the company’s automotive portfolio.

Paul-Henri Matha explains how thermal analysis has guided the development of LED headlamp assemblies that will be used across the company’s automotive portfolio.

PAUL-HENRI MATHA explains how thermal analysis using computational assessment is guiding the development of LED-based headlight assemblies that will serve across many models in the company's automotive portfolio.

Automotive headlight design is an important part of the Renault brand these days, and our "C-shape" LED-based headlights are a signature part of the appeal of our cars. About 30% of the cost of automotive headlight assemblies can be found in the mechanics and 70% in the electronics. Hence, any savings that can be made on the electronics side will have a profound influence on the overall cost of these units. This article outlines how we have broken down our headlamp costs and used thermal analysis tools to incrementally optimize headlight design, achieving a 50% cost reduction in the two years from 2014-2016, and how we intend to halve it again in the next few years while relying on solid-state lighting (SSL) technology.

In Generation 1 of our full LED headlight assemblies, we looked at six of our C- and D-segment vehicles (medium and large vehicle classifications in Europe) from the Espace to the Koleos. We first standardized all platforms to one common height sensor, one common static leveler, one common DRL (daytime running light)/low beam/high beam driver, one common central connector, and common low- and high-beam modules with two suppliers for each. We did this in one year by examining the partition of costs and standardized about 60% of the components of our headlights (Fig. 1).

The plastics we used only made up about 30% of the overall assembly price. The volume effect is the main cost factor for a headlamp's part price, as is its supply entry ticket. However, by moving from halogen headlights in 2012 to LED-based headlights in 2014, the overall costs went up four-fold. This gave us the impetus to see if we could cut costs in Generation 2 of our headlight evolution. 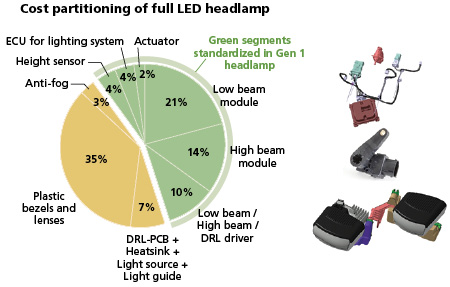 FIG. 1. The charts show headlight components standardized in Generation 1 versus the overall cost partition of a headlight assembly.

We focused our Generation 2 headlamp effort on our popular segment-B car (small car), the Renault Clio, which was going through a facelift and stylistically we wanted to move it to our LED-based, C-shape DRL lighting.

There were four pillars to our Generation 2 strategy:


We standardized the Clio on a common LED electronic control unit (ECU), a common height sensor, and a common leveler. We then focused on the LED low-beam light and reduced its price to 30% by reducing the number of LEDs and the size of the heatsink by 30%, and improving the optical system. By doing all these things (see table), we improved the LED light flux by 33%, and reduced the assembly from eight to five LEDs.

We also increased optical efficiency by 25% and produced an overall assembly size reduction of 50 mm. With the thermal improvements to the LEDs, we increased the LED current, the maximum junction temperature usage, and the flux derating at a lower ambient temperature as shown in the table. Similarly, with the associated heatsink design, we were able to better manage junction temperature and derating through our detailed thermal simulations (Fig. 2).

TABLE. LED solution evolution from Generation 1 to 2 for the Renault Clio headlamp.

With respect to the overall headlamp package size, we saved 50 mm in depth between Generation 1 with a halogen headlamp and Generation 2 with an LED headlamp because of a better-designed assembly. Fig. 3 shows typical CFD (computational fluid dynamic) simulations for a halogen headlamp in the computer-aided design (CAD) software, FloEFD, illustrating the complex airflow and thermal effects to be found on the surfaces in the headlamp assembly.

Digging into the details

Looking deeper at our general CFD-based thermal analysis approach that typically is used to optimize headlamp designs, we would normally be interested in predicting lighting performance at 23°C outside the headlamp in ambient air and up to a maximum of 70°C for the outside temperature for the outer boundary of LED reliability. To validate our simulations, we performed some experiments where we fixed the ambient temperature outside the headlamp at 23°C and installed eight thermocouples outside the assembly for a car with its engine on and off. 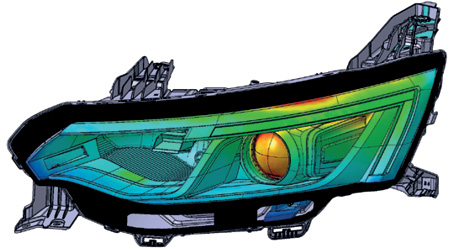 We also performed a series of tests in which we evaluated the effects of engine idling and lights either on or off by looking at the Rjth (thermal resistance) of an Altilon LED assembly (3 K/W) and three chips driven at 1A and a Δ(Tjunction - Tcase) temperature differential of 20°C. We were able to show that for ambient temperatures of 70°C and with both low- and high beams on, together with the engine on, the junction temperature of the LEDs comes very close to the worst-case scenario of 150°C.

We concluded that it was not possible to design an LED system if we were to take into account all the use cases. The OEM must therefore define the best compromise. For example, at 23°C after one hour of engine idling, lighting performance was shown to be at 100%, but if the ambient temperature rose to 50°C for the same situation, the lighting performance would go down to 80%. To respect this specification, we concluded that a thermal sensor had to be added to the PCB (printed circuit board) so the current could be reduced if the temperature at the LED was greater than a threshold we would define. We could then do a thermal derating and a flux derating of the full LED headlamp. 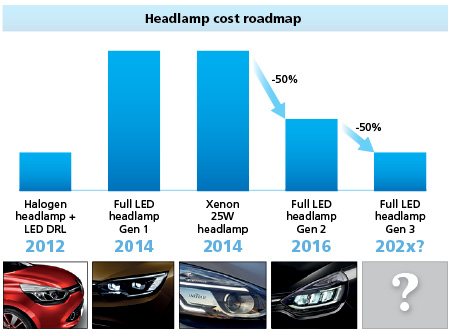 Going forward, we are putting in place an action plan to deal with simulation and testing of lighting in transient drive cycle modes. As an OEM, we want to be able to simulate the impact of car speed on its lighting's thermal performance, and in particular the thermal variation due to speed of each of our engines. This will make thermal CFD software crucial for lighting engineers in future.

We also need to be able to model the nearby engine bay's thermal behavior in parallel with the headlight simulation because they affect each other. And we also see the need for thermal management inside the headlamp when thermal inductors will be present. In short, Renault believes the OEM should be responsible for the complete thermal system associated with headlamp design. To do so will make the OEM a system market leader.

Our immediate goal in the Renault Lighting Team with Generation 3 of our project is to increase the LED flux of headlamps from 270 to 320 lm by 2018-2020 (Fig. 4) and introduce new LED drivers to deal with higher power, plus we are aiming for the introduction of turn indicators and AFS (adaptive front-light system, sometimes called adaptive drive beam) functionalities, as well as overall assembly size reduction. Finally, we are aiming for a height sensor regulation evolution. Our eventual target is to reduce the price of our full headlamp assembly to by another 50%, bringing it to the levels we saw with halogen headlamps five years ago.

PAUL-HENRI MATHA is a French engineer educated at École des Mines, and he is the lighting expert at Renault SA in Technocenter, France. He has been working at Renault for 17 years, with 15 years' experience in the lighting department.