By understanding color science and the potential of color mixing with LEDs with multiple CCTs you can design an SSL lamp or luminaire with excellent lumen and color maintenance, CRI, and efficacy, explains George Kelly. 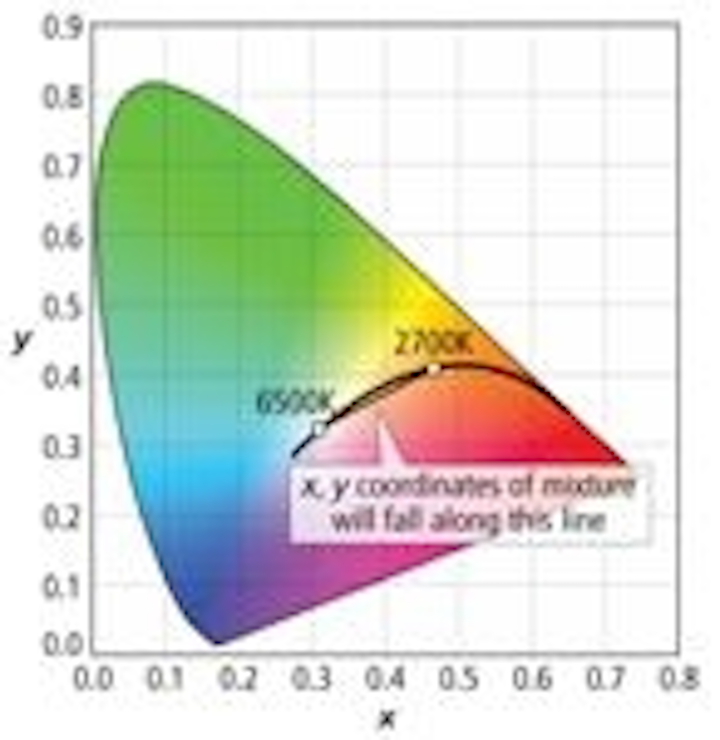 This article was published in the October 2012 issue of LEDs Magazine.

View the Table of Contents and download the PDF file of the complete October 2012 issue, or view the E-zine version in your browser.

LED-based lighting is certainly a growth industry, but also one in which we are still learning how to employ solid-state lighting (SSL) technology to deliver optimal light quality along with the expected benefits of lower power consumption. If you understand color science, and the capabilities of mixing LED color, however, you can design products that deliver on the seemingly opposing goals of quality and efficiency.

In the first article of this series we established three foundational principles of color vision: 1) The relative response of the three types of cone cells in the retina is sufficient to explain color vision, 2) Metamerism which is a direct result of the first principle and 3) Color can be characterized by numerous sets of color-matching functions, all of which are linear transformations of each other.

In the second article we used these principles to explain the origins and uses of the CIE Color Diagram including predicting the color coordinates in the CIE Color Diagram for mixtures of colors. We also discussed the origins of the Planckian locus, a curve through the center of the CIE Diagram which plots the color coordinates of a particular type of white light sources known as blackbody radiators. Blackbody radiators emit light due to their high temperature. The location along this curve depends on the temperature of the object. From this we explained why LED manufacturers design their white LEDs to have color coordinates that fall as close as possible to the Planckian locus.

Unlike both sunlight and incandescent light bulbs, LEDs have a fixed color temperature. To make an LED source that mimics sunlight as it changes color temperature throughout the day or an incandescent bulb as it is dimmed, we have to mix together the light from two or more different color temperature LEDs. We learned in the previous article that the chromaticity coordinates of a mixture of two colors will fall on a line in the CIE Diagram between the chromaticity coordinates of the two colors being mixed. Since the Planckian locus is a curve and not a straight line, a two LED mix will only approximate the Planckian locus for a relatively short span of the locus. Fortunately the region from 2700K to 6500K can be approximated quite well with a straight line between x = 0.464, y = 0.409 (~2700 K) and x = 0.312, y = 0.323 (~6500 K) (Fig. 1).

The issue to address is how we determine the relative brightness of each LED that is required to move along the line between 6500K and 2700K. The problem is trivial if we simply want to have a control knob that varies the color temperature by simply increasing the brightness of one LED while decreasing the brightness of the other LED as the control knob is turned. If, on the other hand, we want to choose a specific target color temperature, then the problem gets more complicated.

These approximations are accurate over a CCT range of 1700K to 10,000K to within a distance of less than 0.003 in the x-y plane, except at the extreme end of the ends where the error grows to 0.01. While these equations look rather complicated, they can actually be simplified to run on a microcontroller.

We also can apply the condition that the relative brightness of each LED sums to 1 resulting in:

If we treat these two equations as a linear system, then we can solve for k1 and k2 given xm and the chromaticity coordinates of the two LEDs.

The majority of the terms in the first equations can be calculated in advance. Only the terms that include xm need to be calculated for a new target color temperature, T. This means that for each time k1 and k2 need to be found for a new T, the calculation will involve two multiplication, two addition, and one division operations. This is not too difficult to perform in a microcontroller, but could easily be converted into a look-up table to simplify the task.

If this degree of error is unacceptable there are two basic ways to reduce the error. One way is to calibrate each light during manufacturing by measuring the exact chromaticity coordinates of the LEDs in the light and then storing those values in a non-volatile memory for use in calculating k1 and k2. This method is obviously expensive and it cannot correct for shifts in the LEDs chromaticity coordinates as the LEDs heat up or age. The second approach is to add a color sensor and use it in a feedback loop to calculate the relative brightness of each LED to achieve the desired mixture. In the next example we will explore this approach while adding a third LED.

In this example we will use Osram's Brilliant Mix technology. Brilliant Mix is a two LED mixture of an amber LED and a greenish white LED Osram calls EQ White, to achieve a high luminous efficacy white mixture at warm white CCTs and with excellent color rendering index (CRI). In conventional white LEDs, the luminous efficacy of the LED drops as the color temperature is reduced. The reason for this is that the phosphors required to produce a spectral power distribution (SPD) with high power on the red end of the spectrum required for a lower color temperature also produce red light at wavelengths above 650 nm where the eye’s sensitivity falls off dramatically.

Brilliant Mix solves this dilemma by using an amber LED with a peak wavelength of 625 nm to increase the SPD of the mixture at the red end of the spectrum without requiring an inefficient phosphor which produces excess power above 650 nm. The EQ White LEDs use a phosphor that peaks around 550 nm, which also happens to be very near the peak of the V(λ) curve so the EQ White LEDs have a very high luminous efficacy. With the addition of a third cool white LED to the red and EQ White LEDs of Brilliant Mix a CCT tunable white lamp with high luminous efficacy and high CRI can be achieved (see the gamut of the three LEDs in Fig. 4).

There are at least two ways to use a color sensor to control the chromaticity coordinates of the mixture. The first method is to measure the exact chromaticity coordinates of each LED and then compute the brightness of each LED to achieve the desired chromaticity coordinates. To measure the chromaticity of each LED independently means that each LED must be on while the other two are off. The issue here is how to do this without it being noticeable. This could be done at startup, but then any shift in color as the LEDs come up to temperature will not be taken to account. It could also be done periodically as the light is on by cycling through the LEDs in rapid succession. If done quickly enough the eye will average the colors together and it will not be noticeable that the individual LEDs are on one at a time. This cycling only needs to be done once every 10 seconds or so minimizing the chance of the cycling being noticed.

One solution is to use a color sensor that outputs tristimulus values directly such as MAZeT’s MTCSiCS color sensor. There are also several RGB sensors commercially available, which have three different sensor types that roughly correlate to red, green and blue. Examples include Maxim’s MAX4406/MAX44008 or Intersil’s ISL29120. These sensors use absorption filters similar to the ones used in the CCD and CMOS image sensor of digital cameras.

Mathematically finding such a transformation is simpler than you might think. We’ll walk through how this is done for a hypothetical color sensor with RGB wavelength sensitivity curves typical of the sensors that are commercially available (Fig. 5). In this example we will use a transformation that uses the R,G,B outputs plus higher order terms:

In this case the resulting transformation is:

Using M to transform the sensors wavelength sensitivity curves into the CIE color matching functions gives interesting results (Fig. 6). While the match is far from perfect, the transformed curves match the CIE color matching functions reasonably well. The resulting error in tristimulus values for a typical 5000K LED is -0.005 in x and -0.01 in y.

While these two approaches to color mixing outlined in this article add complexity and cost to an LED product, in the right application this added expense can be worth it. The use of multiple white and colored LEDs to create LED light sources with tunable color characteristics combined with feedback from color sensors opens up new possibilities while simultaneously improving color accuracy.