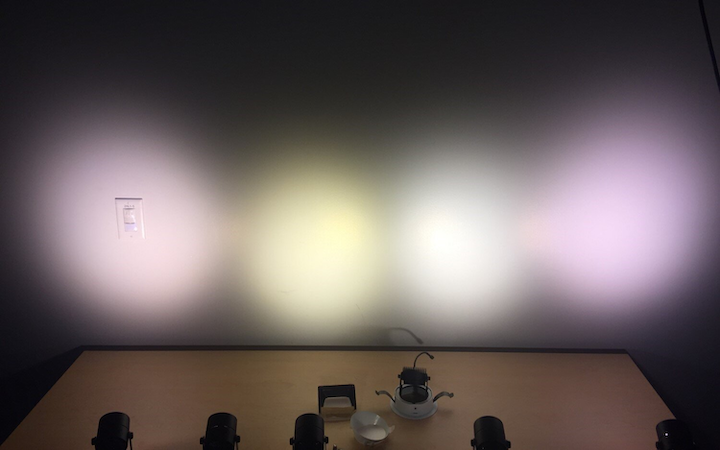 A study by Soraa researchers showed that participants who viewed white light from several LED sources had very different perceptions of variances in color compared to a reference source. (Photo credit: Image courtesy of Soraa Inc.)

The Optical Society (OSA) has published research in its Optics Express journal that suggests human perception of phosphor-converted, white-light sources varies with the age of the person viewing the light.

Presumably, the short-wavelength energy in the blue or violet spectral region is the culprit, although it appears the field of view is also an issue — a phenomenon we have reported on previously. The intent of the research is establishing a knowledge base that solid-state lighting (SSL) product developers can leverage to deliver consistent chromaticity perception to everyone who views an LED-based product, ranging from general illumination lamps and luminaires to backlit displays.

The research was performed by Soraa scientists and engineers, including research team leader Aurelien David. “Our study revealed that the amount of short-wavelength light a source emits together with the viewer’s age may lead to very different perceptions of a white light,” said David. “LED light sources exacerbate this effect, because their emission often features large peaks of blue or violet radiation.”

The research relied primarily on Soraa’s blue-free (BF) LEDs that integrate a violet pump and a phosphor formulation that produces virtually no energy in the blue spectral region. We published an article on that technology a couple of years back and its intended application in circadian or human-centric lighting. Upon seeing the press release on this study, we assumed there was some circadian aspect to the research. But it appears that BF LEDs were simply a good match for the work because of the prevalence of the extremely-short-wavelength violet spectral energy.

The researchers had volunteers view several near-white LED sources with different spectral power distributions (SPDs) and were asked to compare those sources with a reference white source. “According to standard colorimetry methods, all users should have the same perception for a certain LED source,” said David. “However, we found large variations between viewers. Some thought a given source appeared very pink, whereas others thought the same source appeared very green.”

The press release we linked in the lead paragraph suggests primarily that age is the reason for the differences in perception. But reading through the more detailed article, it appears that there are multiple factors at work.

The research studied LEDs that were binned primarily on the 1931 CIE color space work that is still widely used in the SSL world. We published a seminal, four-part series on color science early in this decade that details the science behind the CIE work. It’s a long read, but start with part one and make it through part four and you will learn a lot. Part one introduces the concept of metamers where two light sources with different SPDs can appear to humans to be the same color. And the series explained the concept of color-matching functions based on the science.

But that 1931 work was based on a field of view of only 2°, meaning that only the cones in the center of the eye were considered. We had a contributed article a few years back that detailed this phenomenon. There are few to no blue cones that are located within that field of view in the eye.

There was later work that identified that a 10° field of view would more accurately characterize what a human perceives in terms of color. Osram Opto Semiconductors, in fact, had a program promoting 10° binning of LEDs as a better approach than the widespread 2° binning in use. Osram engineer Alexander Wilm won our LEDs Magazine Illumineer of the Year Sapphire Award in 2017 for that work. Note that if you read this immediately after our posting, there may still be time to submit a Sapphire entry.

The OSA article discussed a new color-matching function called CIEPO06 based on a 6–10° field of view that could help with consistency of perception if applied in LED binning. Still, the study also finds a solid link between age and color perception as well. “The perceived tint of these unusual LED sources is heavily influenced by the viewer’s sensitivity in the violet range, which is strongly age-dependent,” explained David. “Although others have observed similar variations in white-LED perception, the effect was especially easy to see because these special LEDs exacerbate it.”