Texas Instruments has launched the LM3448 targeting 2-8W lamps and the TPS92070 targeting 6-20W lamps, while Maxim has introduced an SSL driver for global usage. 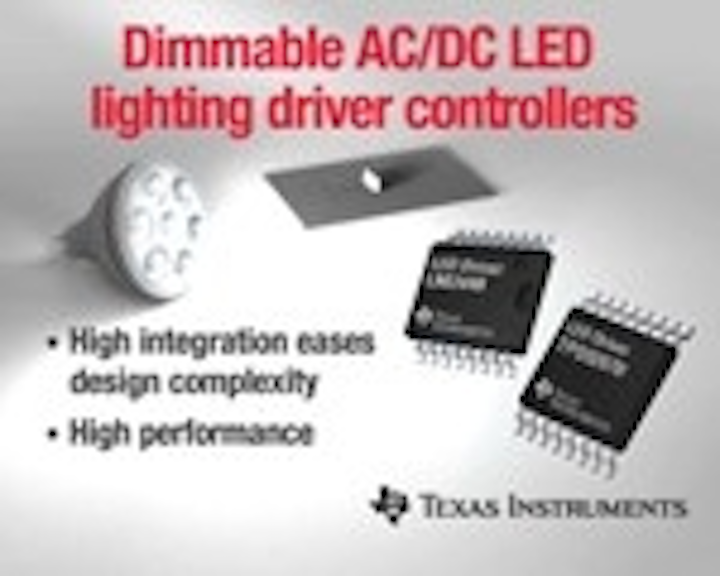 Texas Instruments (TI) utilized the stage afforded by Strategies in Light Europe to launch two dimmable LED driver ICs – the TPS92070 flyback controller and the LM3448 developed by National Semiconductor before the recent acquisition by TI.

Separately, Maxim Integrated Products introduced the MAX16841 driver for global solid-state-lighting (SSL) applications with support for AC input ranging from 90-265V and dimmers that are prevalent in the US, Japan, China, and Europe.

TI's new driver ICs are both targeted at AC-powered lighting applications such as retrofit lamps with support for phase-cut triac-based dimmers. The TPS92070 driver IC targets 6W to 20W applications and can also be used in SSL luminaires such as downlights and wall washers. The IC includes power-factor correction (PFC) providing a power factor greater than 0.8 based on a valley-fill circuit. The IC will automatically disable the PFC circuit if it detects a dimmer ensuring optimized dimming response.

The LM3448 utilizes a step-down buck regulator to provide constant output current to LEDs. The IC is specifically designed for space-constrained and cost-sensitive applications such as integral lamps that require minimal external components. The design can handle 2W to 8W applications with full-range dimming and can be combined with external PFC circuits.

Both of the new products include protection features such as thermal shutdown, under-voltage lockout, current limiting, and protection for LED open circuits. Both also integrate the MOSFETs needed to output the pulse-width modulation (PWM) signal that sets the dimming level for LEDs. The products mark the first announcement in the LED lighting space since TI completed the acquisition of National Semiconductor, establishing clear market leadership in LED driver ICs.

The MAX16841 design can be used in an isolated flyback topology that would be typical in universal lamps for 220V operation or nonisolated buck configurations that might be used in 110V applications.