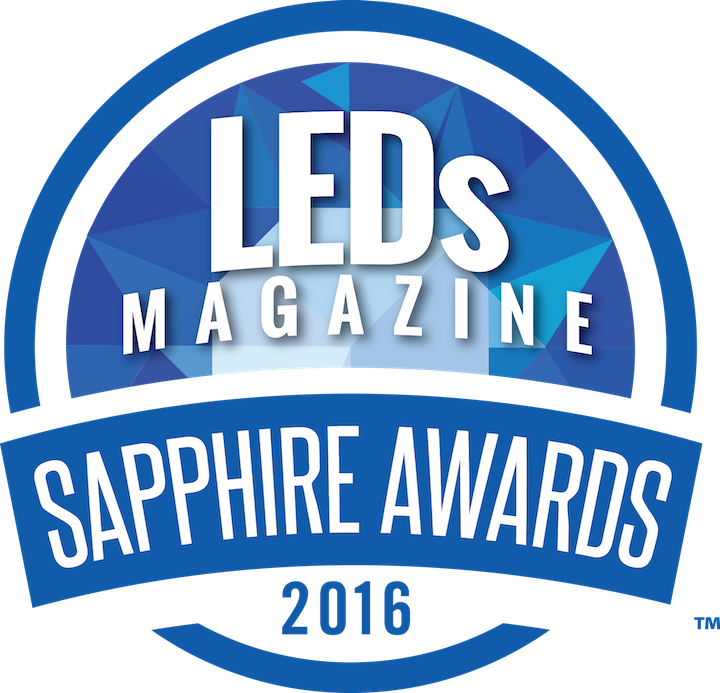 LEDs Magazine announces second annual Sapphire Awards ceremony and Gala
Nashua, NH — LEDs Magazine is excited to announce that it will host the second annual Sapphire Awards in March 2016. The awards program will culminate with the magazine recognizing the solid-state lighting industry's most innovative products at a Gala dinner and awards ceremony held in Santa Clara, CA in conjunction with The LED Show/Strategies in Light conference that is scheduled from March 1-3, 2016. The Sapphire Awards will also present the prestigious Illumineer of the Year Award to a person or team that is responsible for an especially noteworthy development in the LED-centric technology sector.

Get the latest Sapphire Awards program and submission process details

“The Sapphire trophy gained immediate iconic status in our industry,” said Christine Shaw, senior vice president and publishing director at LEDs Magazine. “We set the bar high with the program and the Gala, but we promise to deliver on our commitment to the industry with a stellar program in 2016, including broader recognition for the participants and great return on investment for our sponsors.”

The Sapphire Awards relies on independent judges chosen from industry and consultancy roles to ensure that all entries are fairly evaluated by multiple experts. The judges assigned to evaluate any given product category or Illumineer of the Year entry will be screened to ensure that there is no possible conflict of interest in the process. LEDs Magazine staff will play a supporting role in the judging of the submitted product and Illumineer of the Year nominations.

“We were thrilled to see the response to our inaugural Sapphire Awards in terms of the quality and number of entrants and interest from the industry regarding the winners, but we plan to make the 2016 Awards even better,” said Maury Wright, editor of LEDs Magazine. “We are already working to expand and enhance the judging panel and process and will soon be making our plans public so that companies can easily enter the most-recognized awards program in the LED and SSL industries.”

The LEDs Magazine Sapphire Awards is the first program in the SSL industry to focus on the LED-based market from an enabling-technology and elegance-of-design perspective. There are a number of awards programs that focus exclusively on lamps and luminaires, but the LEDs Magazine Sapphire Awards recognize the true wizards behind the LED revolution.

About LEDs Magazine
LEDs Magazine is the leading information resource for the global LED and lighting community, serving thousands of readers that specify, design, and manufacture LED-based products for a wide range of end-use applications. Its key value proposition is to offer well-written, unbiased, and informative editorial content to more than 63,000 subscribers. LEDs Magazine provides news and product information on a daily basis in combination with in-depth technical articles, analysis, and case studies. For additional information about LEDs Magazine, visit www.ledsmagazine.com.