Plants thrive on red spectral energy stretching to near infrared, and LED manufacturers at LightFair International demonstrated new approaches to deliver that energy in both mid- and high-power packages. 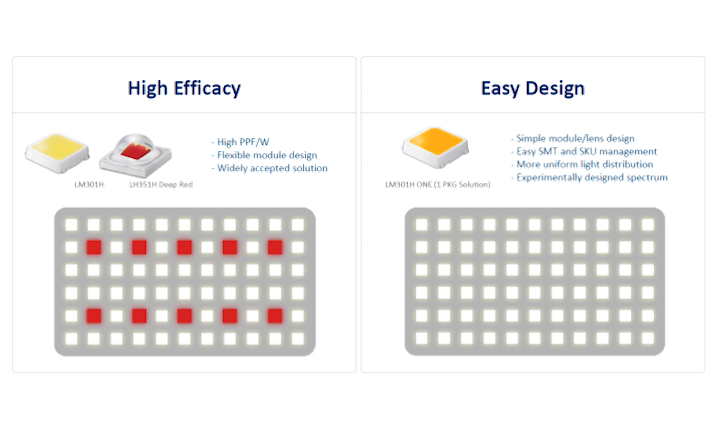 LightFair International (LFI) is decidedly an event focused on general illumination for humans, but in many exhibits it seemed as if plants were the target with horticultural lighting demonstrations easy to find, and here we’ll share some developments in the packaged LED and modular light engine spaces that we found compelling. Samsung’s LED business unit showed its newest mid-power LEDs intended for horticultural applications with increased output power and more red energy. Cree has again extended power output in what it calls the Photo Red band with a new high-power LED. And distributor Avnet has introduced a multichannel modular light engine that will enable luminaire manufacturers to quickly develop new horticultural fixtures.

Just before LFI, Samsung announced the LM301H mid-power LED that the company says delivers the “highest photon efficacy” in the industry for a mid-power, phosphor-converted white LED. The performance claim refers to the horticultural-centric metric micromoles per joule (µmol/J) that describes the efficiency of a solid-state lighting (SSL) device in converting electrical energy to photons in the so-called PAR (photosynthetically active radiation) spectrum between 400–700 nm. You can get more details on horticultural metrics in a prior article that we published on the topic. Simplified, photon efficacy is a parallel metric to lumens per watt (lm/W) that’s used to characterize lighting efficacy for humans whereas the plant metric characterizes photosynthetic photon flux (PPF) relative to power.

Samsung said the LM301H packaged LED delivers 3.1 µmol/J and that luminaires could use 30% fewer LEDs to deliver the same PPF compared to luminaires based on other mid-power horticultural LEDs. “This breakthrough in photon efficacy will go a long way in helping indoor farm owners to maximize plant growth and quality, as well as their profits,” said Un Soo Kim, senior vice president of the LED Business Team at Samsung Electronics. “We are committed to continue innovating white LED solutions optimized for healthier plant production as we solidify our leadership in the horticulture lighting industry.”

At LFI, Samsung showed a new version of the mid-power product called the LM301H One that boosts energy in the red spectral region. As we discussed in an article on our 2018 Horticultural Lighting Conference, researchers have shown that higher levels of red energy and even energy in the near infrared region can improve plant quality and yield. Samsung, and others, offer red monochromatic LEDs that can be combined in a luminaire design with white LEDs to target better yield or quality.

The LM301H One is an attempt to deliver the red-energy benefits without mixing two channels of LEDs. As the nearby image shows, the mixed design uses far more white LEDs than red ones, but still such a design will require multiple driver channels. And uniformity of light will always be an issue. The LM301H One uses a phosphor composition that’s richer in the red region, presumably adding some cost at the component level but enabling a more cost-effective luminaire design and better uniformity of light.

Cree was also touting a red LED at LFI, although in this case with a high-power design. The company demonstrated a 660-nm version of an XLamp XP-G3 LED, and Cree refers to that wavelength as Photo Red.

Cree first introduced the Photo Red products in the smaller XQ-E LED family back in 2016. Later that year, the company brought Photo Red to more of its XLamp family and began a steady ramp in performance.

The XP-G3 family is among Cree’s highest-output families. For horticulture, the XP-G3 Photo Red LED delivers PPF of 12.1 µmol/S at an efficacy of more than 4 µmol/J. As always, ramping performance in an existing footprint allows Cree’s customers to improve fixture performance with a drop-in replacement, turn down drive current to conserve energy, or modify fixtures to use fewer components.

Electronic and optoelectronic distributor Avnet also had a compelling horticultural lighting demonstration at LFI. The company’s LightSpeed division that is focused on SSL has regularly done horticultural demonstrations at industry events, but generally focused on selling individual components ranging from LEDs to drivers, heat sinks, and more. This year, Avnet showed a rectilinear LED module intended to allow lighting manufacturers to jumpstart a horticultural development. Avnet intends to manufacture and sell the module that includes optic, driver, heat sink, and LEDs integrated into a package that’s certified for deployment in harsh environments.

The module demonstrated at LFI features multiple LED channels with individual control. The design used an optic from LEDiL that would ensure uniform beam distribution. And a passive MechaTronix heat sink was attached to the rear. A lighting manufacturer would only need to add any desired enclosure, and perhaps combine multiple modules to deliver a desired form factor.

Your next chance for an immersive learning experience in the area of horticultural lighting is coming up this October. We will hold our fourth Horticultural Lighting Conference. The one-day event will be in Denver on Oct. 31, 2019. Neil Mattson of the GLASE (Greenhouse Lighting and System Engineering) consortium and Cornell University will keynote.