The US Department of Energy said that a complete switch to LED lighting for horticultural applications would deliver 3.6 TWh in energy savings or $240 million annually in the US. 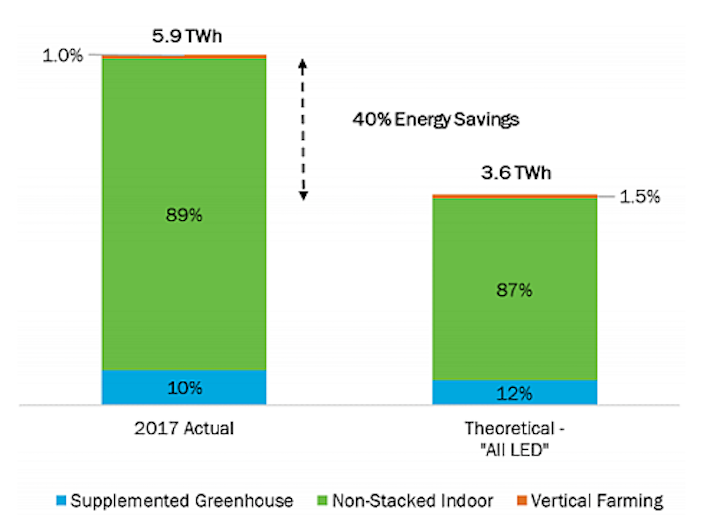 The US Department of Energy said that a complete switch to LED lighting for horticultural applications would deliver 3.6 TWh in energy savings or $240 million annually in the US.

The DOE has recently released a research report that contemplated how much energy could be saved annually were the horticultural industry to make a complete and immediate transition to LED-based SSL. The agency studied SSL deployment in supplemental greenhouse lighting; in ceiling-mounted, single-layer growing operations lit solely by electric light; and in emerging vertical farms where multiple layers of plants are lit with electric light. In aggregate, the report said an LED transition would deliver 40% savings, equating to $240 million per year.

The report “Energy savings potential of SSL in horticultural applications” followed the same formula that the DOE has used in theoretically projecting what an immediate and complete SSL transition could deliver in general lighting. The agency has released a report called “Adoption of LEDs in common lighting applications” at two-year intervals. The 2017 report projected potential savings of $44 billion per year if all lighting in the US were swapped to LEDs.

Clearly, the horticultural opportunity is not that large, although savings of 3.6 TWh per year would take a significant burden off the national power-generation burden. Moreover, population and the need for more food will only escalate. 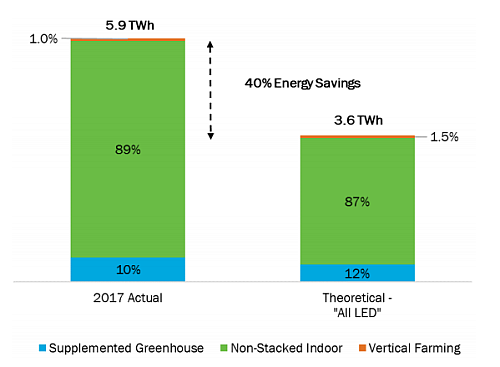 The DOE said supplemental lighting is presently used in 26.8 million ft2 of greenhouse space. Non-stacked space lit artificially totals 18.7 million ft2. The nascent vertical farms market is only 0.5 million ft2 now but has tremendous potential for growth. According to the DOE, LEDs make up 2% and 4%, respectively, of the first two applications but 66% of the vertical farm application that really wasn’t feasible prior to LEDs (see chart above).

Indeed, as we have reported before, the exciting element to LED lighting used for horticulture comes from the new applications such as vertical farming and with changes to more efficient techniques in other applications. The evidence suggests that LEDs can deliver tunable light recipes that have the potential of increasing yields while saving energy.