Working under the LED Light For You initiative, Osram Opto Semiconductors, LEDiL, Mechatronix, Cezos, and ICT Suedwerk have developed a kit or reference design that allows developers to quickly evaluate and explore LED-based horticultural lighting. 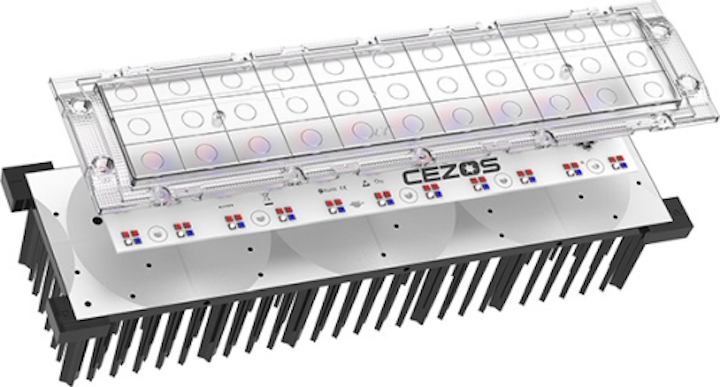 Working under the LED Light For You initiative, Osram Opto Semiconductors, LEDiL, Mechatronix, Cezos, and ICT Suedwerk have developed a kit or reference design that allows developers to quickly evaluate and explore LED-based horticultural lighting.

LED Light For You (LLFY) partners Osram Opto Semiconductors, LEDiL, Mechatronix, Cezos, and ICT Suedwerk (along with engineering partner EuRepTec) have announced an LED-based horticultural lighting developer kit intended to allow product developers to explore the solid-state lighting (SSL) alternative to high-pressure sodium (HPS) lighting in horticultural applications. The kit is a four-channel design that allows developers to mix light from a combination of hyper-red, deep-red, deep-blue, and cool-white LEDs from Osram.

Light recipes remain an important area in the horticultural lighting space, as we heard repeatedly at our recent Horticultural Lighting Conference. Some of the information presented at that conference will be reprised in a webcast on Thursday. It’s clear that tuning the spectral power distribution (SPD) of horticultural products can enhance productivity in plants. But ideal recipes vary by cultivar and even by stage of plant growth, and scientists and growers continue to study the topic.

The LLFY reference design provides some simple knobs that can be turned to control the output. The light engine used in the project is a printed-circuit board (PCB) made by Cezos, that has clusters of the four LEDs mentioned earlier. The four LEDs are all from Osram’s Oslon family. Cezos offer a number of different light engines in various form factors in its GrowEmity family of products. 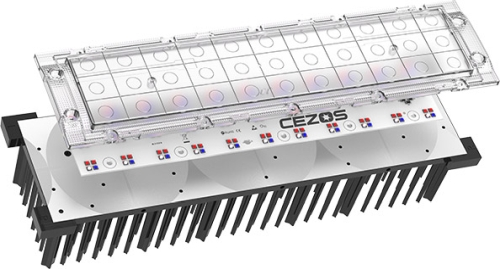 A new horticultural lighting developer kit from LED Light For You Partners contains Osram LEDs, optics from LEDiL, a PCB from Cezos, a heat sink from Mechatronix, and thermal interface materials from ICT Suedwerk and EuRepTec. (Photo credit: Cezos.)

The developer kit further features a secondary optic developed by LEDiL that serves to uniformly spread the light output from the array of LED clusters. The light engine, meanwhile, is mounted on a heat sink from Mechatronix. And ICT Suedwerk and EuRepTec have tested different thermal interface material (TIM) options that can be sandwiched between the PCB and heat sink. The partners are also offering a reference design to customers that can be used to quickly customize and develop new products based on the developer kit architecture and concept.

Osram has long offered LEDs with an SPD designed for specific plant needs for the horticultural growth cycle. Indeed, the company has an internally-developed horticultural lighting reference design that uses the relatively new hyper-red Square LEDs from the Oslon family.

If you need more background in the area of horticultural lighting, we’ve published a number of articles on the topic. Last year we updated the latest thinking on recipes and development of new horticultural-centric metrics. We also published a feature article on our 2016 conference and will be adding a feature on the 2017 conference in the coming weeks.

The Osram-led LLFY initiative dates back more than a decade and Osram has used the initiative to help product developers wade through the technical challenges associated with SSL system design. We first covered the initiative back in 2006. It brought technology partners together that could help developers solve difficult problems. The LLFY organization has been most active around large industry events such as Light+Building.