LEDs are set to change horticulture by increasing yields 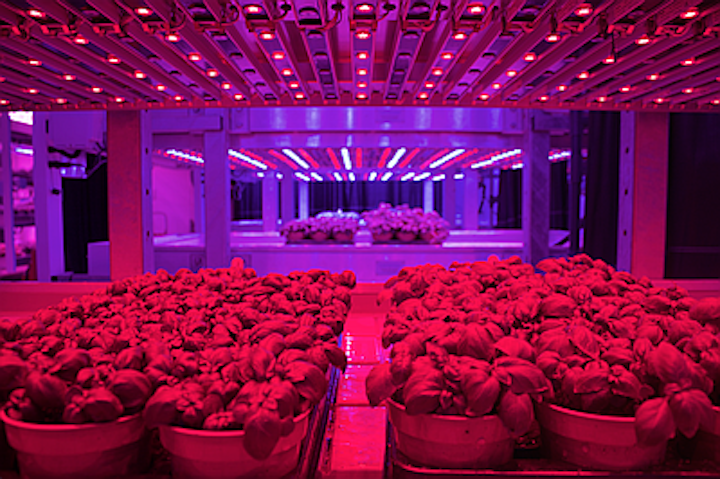 Ninety percent of plant genes are regulated by light. So, by changing the light spectrum, it is possible to change how a plant grows, how fast it develops and its morphology. ROBERT LEEMING of Lux Review delves into the science of horticultural lighting with PHILLIP DAVIS of Stockbridge Technology Centre.

The color of LED light can be used not only to assist the growth of plants, but it can also be used to improve their year-round taste and quality and potentially increase their nutritional value.

Not only this, but growing fruits and vegetables under LED light makes them less vulnerable to the threats of climate change. It is no wonder then, that interest in the role LEDs can play in farming is growing.

Lux spoke to Dr. Phillip Davis, business manager at Stockbridge Technology Centre in Yorkshire, who will speak at our Horticultural Lighting Conference, to find out what more can be done to speed up the LED revolution in farming.

The Stockbridge Technology Centre was originally a UK Government research facility set up after the Second World War to improve food production methods. 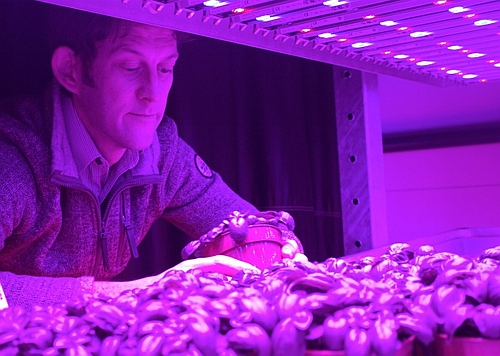 The site has survived through many changes, but it is now an independent industry-owned site and registered charity, which delivers innovative R&D services to all sectors of the horticulture and agri-food industry.

Today, as the world population continues to grow, there is a real fear that we will run out of food. The role of the Stockbridge Centre in the twenty-first century is to bring forward technology that can improve food production sustainably to tackle the challenges of today.

“LED lighting was technology that we recognized five or six years ago as being something that could really benefit horticulture,” Davis told Lux.

“There is a huge amount of interest across the horticultural industry in LEDs. This is not just because of energy efficiency, but because of the potential light has to manipulate plants.”

The ability to change the color of LED light is crucial. Ninety percent of plant genes are regulated by light. So, by changing the light spectrum, it is possible to change how a plant grows, how fast it develops, and its morphology. It is also possible to change the flavor, the aroma, the antioxidant content, and potentially the amount of vitamins produced by a plant. 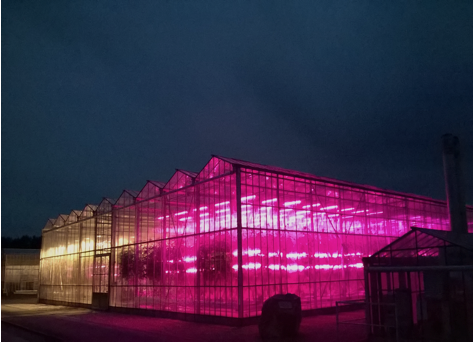 One of the greenhouses at the Stockbridge Technology Centre where tomatoes are grown beneath colored LEDs. The glasshouse contains two types of Philips LEDs. Top lights are located above the crop, which are used to replace the standard high-pressure sodium (HPS) lamps and LED interlights are located within the canopy to maximize crop light use efficiency.

STC uses a plant’s natural biology to do this and does not alter or play with their genetic makeup in any way. Instead, it uses light to improve the yields, quality, as well as the taste of the product being cultivated.

Light can be used to ensure that the taste of fruit and vegetables is consistent throughout the year, for example, ensuring there are no differences in taste between a strawberry grown in season and one grown in winter.

“We spoke to a restaurant chef recently who said that it is quite difficult to design a recipe if the flavor of basil changes throughout the year,” Davis said.

“We can produce the same quality basil all year round, meaning that every time you make a recipe you will need the same amount of basil every time.”

If the light environment is right, it is also possible to improve the rooting of plants when vegetative cuttings are taken. The right lighting can improve the strike rate of cuttings (i.e., the number of plants taking root) from 20% to nearly 100%, meaning savings on labor and materials can be made.

A revolution is happening in horticulture. It’s a seismic shift that will change fundamentally how we grow plants — and it’s all down to lighting. Lux’s Horticulture Lighting Conference will take place in Eindhoven, the Netherlands, on Tuesday, May 21, 2017. To find out more information and to register to attend please click here.

More than a thousand commercial growers have visited Stockbridge to see the technology, but the use of LED on farms is still not particularly widespread.

“The main delay in application is convincing growers that LED is an economically sensible move,” Davis said. “This is because LED is more expensive that the lighting technology that is currently used on farms. When the price starts to drop, there will be a lot of growers looking to invest in the technology.”

One of the main reasons for this is the fact that LEDs are constantly advancing at such a speed that prices of lighting units are remaining similar to what they were two years ago. Installation costs are falling, but the price of LED does still not appeal to many growers.

The advantages of LED are considerable: As well as altering the light spectrum, the low temperature of LED means that they can be placed near to the plants without damaging them. There are also no heavy metals or glass in LEDs, whereas sodium lights do sometimes break, leading to contamination. 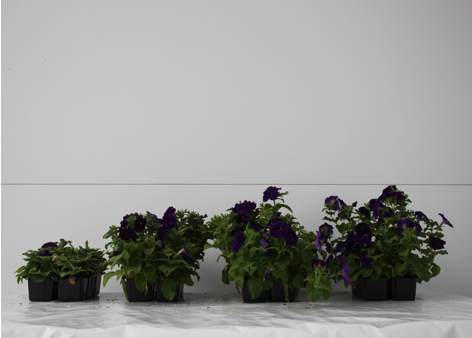 LED spectra can be adjusted to control many aspects of plant quality including appearance, height, and flowering time.

But the main advantage of LED farming is that it is impregnable to global warming, which means plants can be cultivated without interruption, no matter what the weather.

“The systems that we are talking about are never going to replace field crops,” Davis says. “What we are going to do is add another layer of crop production into the current system, that is robust enough to survive climate change and adds security to the food chain. These systems will produce the same quality of crops all the time, without being dependent on weather.”

Since joining Stockbridge from academia, nearly half a decade ago, Davis has been really surprised by the interest that both the farming and the lighting industries have shown in his work.

He has been particularly impressed by the farming industry’s desire to bring academic science into practice; however, he has been unsettled by the barriers that are in place to prevent this progress.

“We need lower costs for LED farming to take off,” Davis concluded. “But not at the expense of quality. Prices are coming down, but we need to be in a position where people look at the technology and say yes, this makes obvious economic sense.”

ROBERT LEEMINGis the online editor at Lux Review (luxreview.com), a publication of Revo Media Partners Ltd. and part of PennWell’s LED & Lighting Network. This article was first published on luxreview.com.