The Arizona Cardinals' home stadium becomes the first NFL venue in which the playing surface is lit with SSL, providing more uniform lighting for fans in the stadium and those watching on TV. 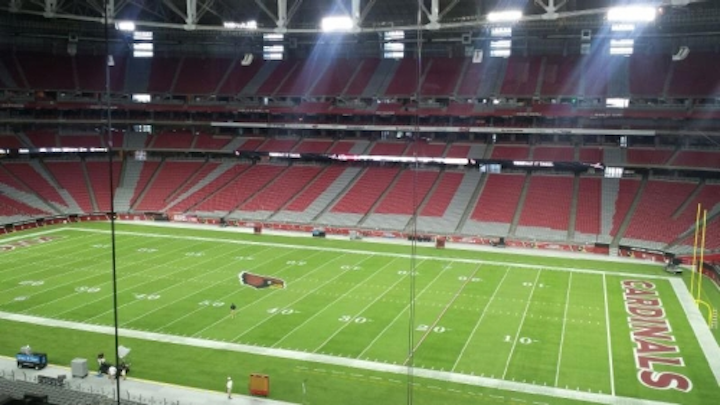 The Arizona Cardinals' home stadium becomes the first NFL venue in which the playing surface is lit with SSL, providing more uniform lighting for fans in the stadium and those watching on TV.

Ephesus Lighting has announced that the University of Phoenix Stadium located in Glendale, AZ has installed the company's LED-based stadium lights. The Arizona Cardinals have become the first home NFL (National Football League) team to play on a surface lit by solid-state lighting (SSL), and the NFL Super Bowl will be played under the LED lighting on Feb. 1, 2015. 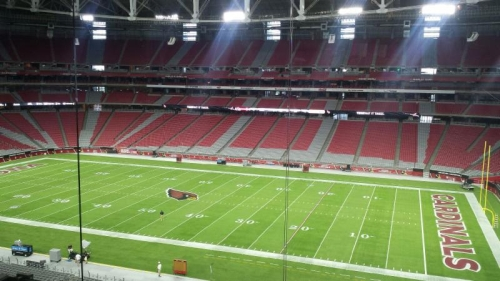 The latest LED lighting of a major sports venue means effectively that there are no more obstacles to SSL deployment in the sports application. Even two years ago, LED fixtures that could deliver the light levels required for venues were considered too costly and too heavy for broad deployment. We first saw LEDs used effectively in indoor sports applications such as tennis or basketball arenas. Most recently, we saw the lighting of an English Premier League soccer venue with LED-based lighting. And now the most popular and profitable sport in the US has an LED-lit venue.

"We are excited that so many sports and entertainment venues have seen the light and made the switch to LED lighting over the past two years," said Mike Lorenz, president of Ephesus Lighting. "The feedback from fans, players, and broadcasters at venues all across North America who are using our LED sports lighting reinforces that LED is the premier lighting solution for sports and entertainment venues."

LEDs also offer the ability of instant on and off whereas MH lighting has a relatively long restrike period. With MH fixtures, venues install mechanical shutters to dim or extinguish the lights during ceremonies such as dynamic player introductions. The LEDs can be controlled as required electrically.

Still, an NFL venue would not have transitioned to LED lighting if the implementation did not deliver equal or superior lighting to the legacy fixtures. And as it turns out, LEDs generally deliver higher light levels and more uniform distribution of the lighting. That performance impacts the players, fans in the stands, and the high-definition TV (HDTV) broadcast to homes.

"We selected Ephesus after careful consideration of all the other available options," said Peter Sullivan, general manager and regional vice president for Global Spectrum (a facility management firm) at the University of Phoenix Stadium. "We are confident that their solution will improve lighting for the athletes, fans, and broadcasters, all while reducing energy consumption and eliminating conventional sports lighting maintenance expense."

LED lighting will certainly be on the largest of stages come February and the Super Bowl with a global audience watching. Most likely we will hear again about the length delay at the 2013 Super Bowl in New Orleans when a temporary power failure led to a long restrike period that delayed play. Ironically, the New Orleans Superdome featured LED lighting externally and in some public areas of the stadium but not for the playing surface.

"As the host venue for the 2015 Super Bowl, we look forward to demonstrating the benefits of LED technology to a global audience," said Sullivan. Indeed, with its spectacular half-time concert, and of course the game, the Super Bowl will put the Ephesus LED lighting to a tough test.