No LED floodlights are seen in site at Osram and Zumtobel installments across France. Both vendors sheepishly acknowledge that metal halides rule. 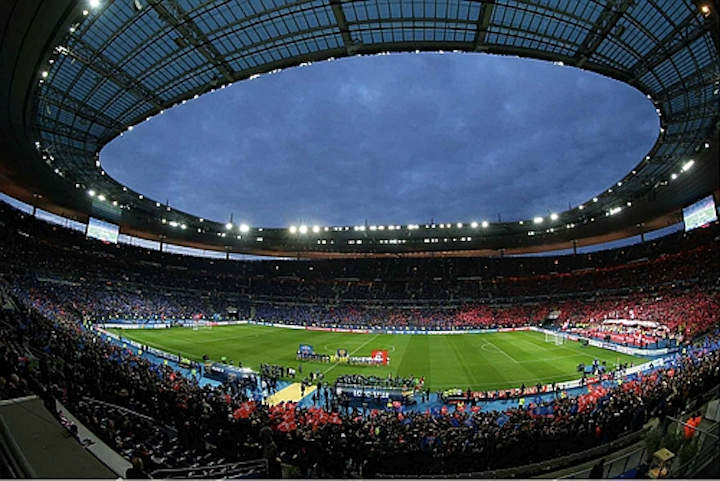 No LED floodlights are seen in site at Osram and Zumtobel installments across France. Both vendors sheepishly acknowledge that metal halides rule.

The quadrennial UEFA Euro Cup is the planet's second largest tournament of national soccer teams, behind only the World Cup, and ahead of the Copa America. The month-long 24-country final round of the 2016 installment is in full swing across 10 cities in France. Naturally, lighting companies are kicking off with the opportunity to boast that they are providing stadium lighting.

On such a giant stage, and with so much publicity at stake, they must be implementing the latest in outdoor LED floodlight illumination, right? 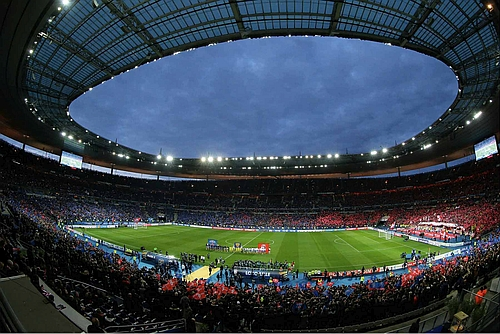 The score is metal halides 477, LEDs 0 at the Stade de France near Paris, where 477 Osram metal halide luminaires light up the field that is hosting many of the Euro 2016 matches, including the final on July 10. (Source: Getty Images Sport/Xavier Laine via Osram).

That's what we assumed here at LEDs Magazine when we spotted a couple of press releases from Osram and Zumtobel proudly announcing that they have installed new systems to light up the action at the centerpiece Stade de France near Paris as well as in Lille and Marseille for Osram with its Siteco brand of luminaires, and at the arenas in Saint-Étienne, Lyon and Nice for Zumtobel and its Thorn brand.

But as we read through the releases from top to bottom describing floodlighting at the six stadiums, we noticed three letters that were conspicuous by their absence: L-E-D.

So we read through them again. And again. Still no LEDs in the floodlights. (Osram is using LEDs for some colorful façade lighting, but not for lighting the playing fields).

Yet both companies described the superlative lighting performance typically ascribed by vendors to LED field lighting at major sports venues and events such as Brazil's World Cup in 2014, the 2015 Super Bowl in Phoenix, and at several European soccer facilities and US baseball parks.

“Siteco projectors will create optimum visual conditions for both athletes and spectators,” proclaimed Osram in trumpeting its “state-of-the-art lighting technology.” It crowed that the Stade de France lighting “enables brilliant and high-definition quality pictures that even top the standards required by the international football association regarding lighting quality on the playing field.”

The Zumtobel press release sang from the same hymn sheet. “At all the stadiums, three or four variable lighting modes are available to meet the different lighting requirements during training, during a match, and for TV broadcasts,” Zumtobel said of its Thorn lighting. “The ability to adjust the level of illuminance makes this lighting solution not just highly flexible but very energy-efficient, too.”

Not only did both Osram and Zumtobel fail to mention LEDs, they omitted any reference at all to the light source — as if anything other than “LED” might be an embarrassment or even a dirty word in today's light-emitting-diode zeitgeist.

So we asked. And the same answer came back from both companies: “Metal halide.”

A Zumtobel spokesperson explained that “LED is only just at the point it can do the job but often more luminaires are needed than with metal halide. While the light quality is on the same level, the cost of LED is still higher. For most, this makes it difficult to justify, unless you need the controls or theatrical effect. Certainly on energy alone the payback takes too long given the time per year the lighting is used.”

So there you have it. For stadium floodlights, LEDs can be too many and too costly, at least according to Zumtobel. Perhaps that explains why a year after the Super Bowl first played under LEDs in 2015 at University of Phoenix Stadium, it returned to metal halides this year at Levi's Stadium in Santa Clara, CA (although designers would have made that lighting decision several years ago).

Whatever the specific reasons at each venue, LEDs have not taken completely taken over the sports lighting game. Not yet, anyway.