New 40W- and 60W-equivalent SSL lamps feature a traditional white look in the off state, although the warm-white versions of the new lamps still rely on remote-phosphor technology on an inner optic that isn't readily visible. 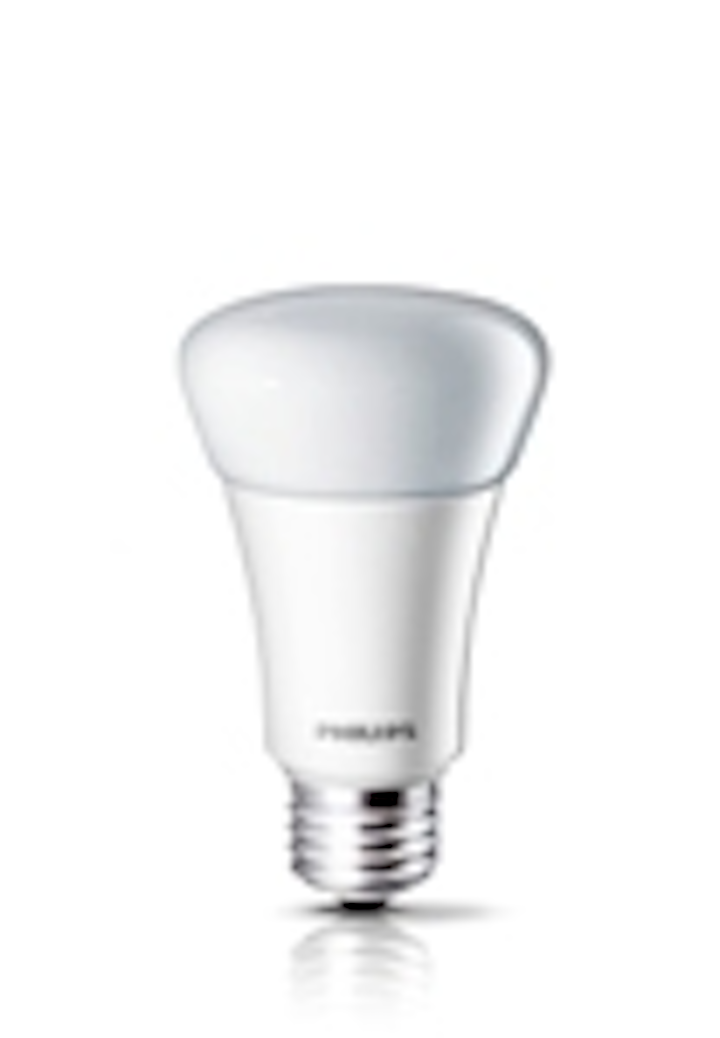 Philips Lighting recently launched the Philips Energy Saving LED A19 40W- and 60W-equivalent LED retrofit lamps that differ in architecture from the remote-phosphor EnduraLED/AmbientLED families and the L Prize winning lamp. The new design has no evident heat-sink fins, has a traditional white look in the off state, and offers more light output at lower power compared to prior Philips' solid-state lighting (SSL) retrofit lamps.

We covered the pertinent specifications of the 60W lamp in a story on our sister website Illumination in Focus. Here we will cover the design elements of the new SSL lamps because Philips has made major changes although hidden remote-phosphor technology remains inside the warm-white versions of the new lamps.

The current line of omnidirectional A Lamps from Philips all use a similar design that we have covered previously. The lamps are divided into three optical chambers that are separated by metal channels that encourage cooling air flow. Moreover, the lamps use readily-evident yellow or orange remote phosphor on the inside of the optics that make the lamps undesirable to some specifiers and buyers in applications such as open fixtures where the lamps are exposed in the off state.

The new design is more aesthetically pleasing both due to the white look in the off state and the lack of cooling fins or air channels. Indeed, the lamps could almost pass for a traditional incandescent A-lamp, except that they maintain the unique geometric shape that Philips has used in its SSL A-lamp line.

In the past that geometry was in part used to ensure an omnidirectional light distribution. The lamps with three chambers had LEDs mounted in each chamber that faced outwards from the center axis of the lamp and angled upwards and downwards.

In the case of the new lamps, Philips maintained the geometry more because it's easily recognized as a Philips-branded product. Todd Manegold, director of LED lamps marketing at Philips Lighting, said, "That has become something of an iconic shape." He also pointed out that Philips used the same geometry in the recently-announced color-tunable Hue lamp.

The new A-19 lamps use a more traditional design with the LEDs mounted on a plane perpendicular to the center axis of the lamp, projecting light upwards into the light chamber. The optic itself must ensure that the lamps still deliver an omnidirectional distribution. And clearly the design works, because the 2700K version that Philips calls Soft White has already gained Energy Star status and Energy Star requires an omnidirectional beam distribution. The 5000K version, that Philips calls Daylight is designed to meet Energy Star guidelines, but currently Energy Star doesn’t apply to lamps in that cool-white CCT range.

Still, the question that remains is how did Philips get more light output in the new architecture? The new 60W-equivalent lamp uses 11W, but delivers 25% more lumens than the prior 12.5W product. But generally we have learned that remote-phosphor SSL designs are more efficient – especially in warm-white CCTs (see our recent feature comparing white-LED and remote-phosphor designs).

Improving efficacy in LEDs is certainly part of the story. Manegold said that the new lamp also has the advantage of using a glass optic whereas prior lamps used plastic, and that it's "easier to deliver more light through glass."

The Soft White version, however, must deliver the light output while dealing with losses in two optics. Philips still found that remote phosphor delivers superior efficiency in delivering a warm-white CCT. So the lamps uses a remote phosphor dome between the LEDs and the outer optic.

The inner remote-phosphor optic isn't a brand new idea. Cree, for example, built an A-lamp reference design using such an architecture in January 2011 to prove that a 60W-equivalent lamp could meet Energy Star guidelines. Cree has also used the approach on laboratory demonstrations that set efficacy milestones. Manegold said that Philips has previously shipped a retrofit lamp in the so-called snow cone form factor that used an inner remote-phosphor optic.

Still, it's surprising that remote-phosphor delivers better efficiency through two optics compared to what a mix of phosphor-converted white LEDs and red or amber LEDs could deliver through a single optic. Such a mix is often used to achieve warm CCTs.

The 5000K version of the lamp relies strictly on phosphor-converted white LEDs. That product has already been sold in some Home Depot stores, while both versions should be widely available at the beginning of 2013.

The other big change is the lack of evident cooling fins, and clearly any reliable SSL design has to mitigate heat issues. Manegold said, "We still have to manage the thermals with a heat sink." He also added, "We've learned to better manage the thermals." And apparently the surface between the Edison base and the optic provides the required heat conduction from a hidden heat sink to the air.

When asked why Philips was moving to a new architecture after winning support from many customers for the remote-phosphor lamps, Manegold said "We have been focused on replicating traditional sources." He said first that meant delivering the light output and warm CCT that matched incandescent sources. And now Philips is addressing the aesthetics of the lamp.