Sharp's tunable LEDs are intended to increase the wellbeing and productivity of people by matching the CCT of a light source to the human circadian rhythm, and come in a new, more compact footprint. 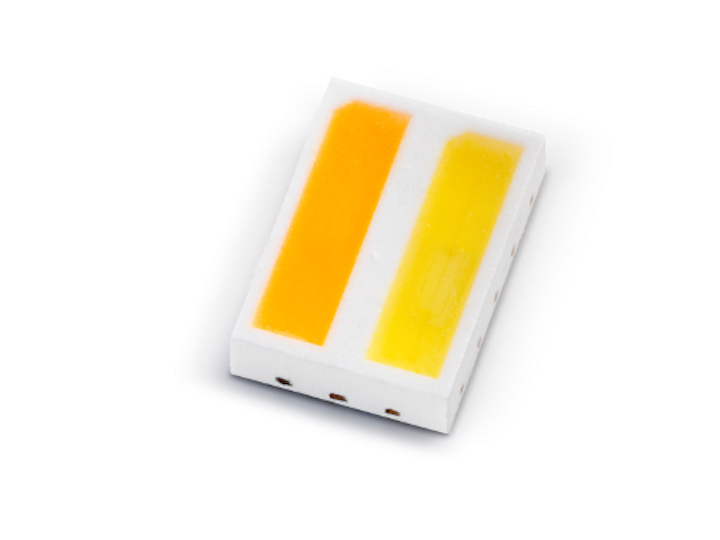 Sharp Devices Europe has announced the Mini-Tiger Zenigata LED family that includes emitters in two different CCTs, which allows the components to produce light over the range of 2700–6500K. Sharp will demonstrate the compact 4.2×3×0.9-mm LEDs for the first time at the Light+Building tradeshow that will begin March 30, 2014 in Frankfurt, Germany. The LEDs will enable tunable solid-state lighting (SSL) products that can enhance health and productivity.

The new LEDs add to the Zenigata family with a much smaller LED in a surface-mount-device (SMD) package. The Mini-Tiger products are a departure from the prior Zenigata-branded chip-on-board (COB) LEDs. Indeed, the Mini Zenigata LEDs announced last year are in a 12×15-mm footprint. As for a tunable CCT, Sharp has previously offered that feature in larger COB LEDs, having launched the Tiger Zenigata with a 17-mm light-emitting surface (LES) back in 2012. That COB device had visible stripes of different phosphor formulations across the LES — presumably the basis for the name Tiger. The new Mini-Tiger Zenigata mid-power LED simply has side-by-side emitters with different CCTs.

The new LEDs have only two emitters in a conventional discrete LED package. One of the emitters radiates at 6500K and the other at 2700K. The die are packed closely together and Sharp says the implementation will deliver uniform light with no shadows.

The Mini-Tiger LEDs are designed to be driven by dual constant-current power supplies with each channel delivering 120 mA to the LED that has a typical forward voltage of 3.1V. For an SSL product to offer tunable performance, the design will require some local control to vary the relative drive currents to the two LED channels. Sharp has suggested that a link such as DALI (digital addressable lighting interface) would be typically used to connect a luminaire based on the LEDs.

Sharp expects the demand for tunable SSL systems to escalate as more people understand the benefits of lighting that matched the progressions of natural daylight from cool CCTs in the morning to warm CCTs at night. Lighting that mimics the progression could improve worker productivity and enhance sleep patterns at night. Sharp cites a two-year Fraunhofer Institute study that established a link between the CCT of light sources and human biorhythms.

Are we pushing complex SSL solutions too quickly?

Could simplified lighting offerings promote “tunable SSL for all” within the consumer base comfort zone?
Carrie Meadows
Jun 28th, 2019