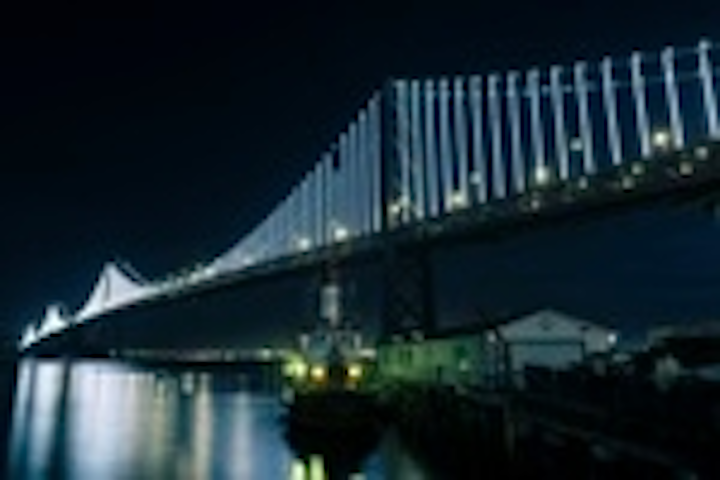 The city of San Francisco, CA threw the switch on The Bay Lights project on Tuesday night March 5, turning the west span of the Bay Bridge into the world's largest LED light sculpture in celebration of the 75th anniversary of the bridge. Philips Color Kinetics supplied the 25,000 programmable white LED lights used in the solid-state lighting (SSL) art project created by artist Leo Villareal.

"This isn’t about just lighting another bridge with white or colored light," said Villareal. "The Bay Lights emphasizes the use of intelligent lighting, fully utilizing individual control and the ability to create 255 levels of brightness per node."

California Lt. Governor Gavin Newsom hosted The Grand Lighting ceremony that was also webcast at www.thebaylights.org. Despite inclement weather, a large crowd turned out to view the spectacle that stretches 1.8 mi and reaches heights of 500 ft with LED lighting installed on the vertical cables used on the suspension bridge.

Villareal is renowned for his LED-based, light-art projects that combine networked LEDs and computer control. Examples include the Mulitverse sculpture that links the East and West Buildings at the National Gallery of Art in Washington, DC.

At the Grand Lighting ceremony, Newsom said, "The patterns will remarkably never repeat." When asked for clarification, Villareal explained, "You will never see the exact same progression of scenes twice." The patterns can include animations moving across the span, multi-dimensional waves of movement, and light-level changes for impact. Villareal said, "The custom software I have created allows for the creation of ever changing patterns specifically created for this location with the goal of producing a work of art."

The installation utilizes Philips Color Kinetics eW Flex SLX product in a 4200K CCT. That product consists of a flexible string of individually controllable white LED nodes that were attached at 1-ft intervals on the suspension cables. Workers have toiled for months manually installing the lights on each cable between the hours of 11:00 pm and 5:00 am so that the project would minimally impact traffic on the bridge.

Villareal said, "Using Philips LED technology really gives me the creative flexibility I need to bring this bridge to life and fulfill my vision." Bruno Biasiotta, CEO and president of Philips Lighting Americas added, "As lighting and technology converge, we push the boundaries of how we interact with light and start to see the art of what is possible. Through the tireless work of ITA, Leo Villareal and CalTrans, the residents of San Francisco will have a stunning new piece of artwork that honors the city’s devotion to the arts and inviting visitors to see what else this fantastic city has to offer."

The project will be live for at least two years. It was conceived by Ben Davis who created The Bay Lights organization, and the group has raised the money to pay for the project privately.

By relying on LEDs, The Bay Lights project will consume only $11,000 in energy per year. "The Bay Lights is a prime example of how LED technology can create meaningful value for a community in an environmentally friendly way," said Biasiotta. The energy used is being offset by a dedicated solar facility in Davis, CA. The organization, meanwhile, believes that the project will bring upwards of $100 million to San Francisco in tourism revenue.