Jianzhong Jiao describes the work of a new ad hoc group within ANSI that is contemplating how to accommodate the perceptions and preferences of humans in terms of the chromaticity of white light relative to the black-body locus.

LED datasheet standard enhances manufacturer-developer communications (MAGAZINE)JIANZHONG JIAO describes the work of a new ad hoc group within ANSI that is contemplating how to accommodate the perceptions and preferences of humans in terms of the chromaticity of white light relative to the black-body locus.

The newly published 2015 version of the American National Standards Institute (ANSI) LED lighting chromaticity standard, ANIC C78.377-2015, incorporates support for new LED lighting products in the lower correlated color temperature (CCT) range - for example, 2500K and 2200K. The new version also provides guides for the LED makers and users with higher color consistency with the recommended four-step MacAdam ellipse equivalent quadrangles and circles. But the ANSI mission is based on continuous improvement. And a new ad hoc group has formed at ANSI to work toward recognition of the perceived or preferred white colors below or above the black-body locus.

The ANSI chromaticity standard is a communication tool used between LED makers and users, standardizing the white color variation and tolerance for indoor lighting applications. We covered the new standard in detail in an article published in February 2015. 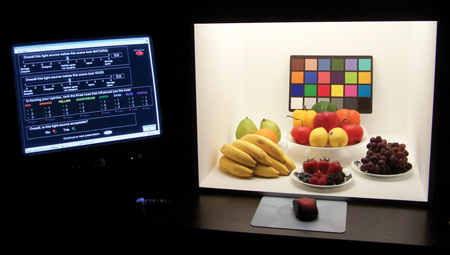 FIG. 1. At LRC, scientists conducted color rendering experiments on subjects' perception of the whiteness of illumination when in the presence of white surroundings with or without colored objects.
Source: Lighting Research Center.

During the development of the ANSI chromaticity standard, the experts took a logical approach to determine the targeted CCT center-points that form a white curve by connecting the black-body locus in the lower CCTs to the daylight of illuminant D65. So far, in the 2015 version of the ANSI chromaticity standard, the white curve covers the CCT range from 2200K to 6500K. The tolerance from the white curve, or the color consistency, is specified using the nominal CCTs, fixed or flexible, with the deviations. The deviations are described by either the seven-step or four-step MacAdam ellipse equivalent quadrangles or circles. By using these quadrangles or circles, LED makers can further determine the LED binning methods or themes that may efficiently use the yields of the LED products; therefore, this standard is also widely used for LED makers to establish the LED color-binning basis.

The quadrangle tolerances form a continuous white region from 2200K to 6500K on the chromaticity diagram, making the LED binning specification relatively easier. Within the region, the binning grids can be formed by dividing the region with lines that are parallel to the white curve and to the Duv (or Judd) lines, in which Duv is the distance from the black-body locus on CIE 1960 (u, v) coordinates. The grid size can be a three-step or smaller MacAdam ellipse equivalent, depending on the degree of color consistency needed in an application. Circular tolerances can be challenging for binning LEDs, but with advances in today's technology, LEDs can be binned in a circular fashion as well. In all cases when specifying the tolerances, the location of the targeted or center-points of the nominal CCTs, also known as the white curve, has long been a debatable point because we can't answer how human eyes see white light, and whether or not the ANSI white curves are really white.

In 2009, when ANSI started the first revision of what would be the updated 2011 standards, ANSI C78.377-2011, the committee requested research be conducted by the human factor and vision experts to determine the white curve. In response to the ANSI committee's request, the Rensselaer Polytechnic Institute Lighting Research Center (LRC) and the National Institute of Standards and Technology (NIST) Optical Radiation Group in the Sensor Science Division each conducted independent research studies. Although the same goal was used in defining where the white curve is located on the chromaticity diagram, the researchers used two different approaches. The LRC approach was to ask test subjects for perceived whiteness while looking at white surroundings with or without colored objects (Fig. 1). The NIST approach was to ask the subjects for preferred white light in illuminating surrounding colored objects. 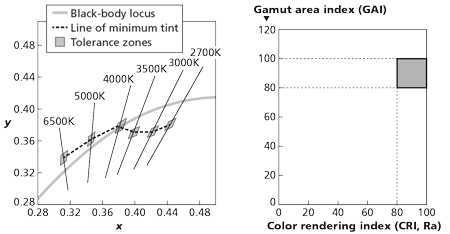 The NIST study (Fig. 3) described a series of vision experiments that were "conducted with 18 subjects on their response to Duv. The results show that Duv of approximately -0.015 [below black-body locus] on average is perceived as the most natural. This Duv level is outside the ranges specified by existing [ANSI chromaticity] standards. This indicates that new lighting products having a more preferred chromaticity than the current products may be possible."

Color preference or perceived color is subjective. It depends on the light level, the surrounding environment, or even the observer's cultural background. The ANSI chromaticity standard is intended to be objective by giving the LED users a specification of color variation and consistency so the white color of indoor illumination can be communicated among LED makers and users with a simple language. Over years of practice with ANSI C78.377, ANSI's approach for defining a white curve is accepted as the most logical approach and is independent of the light level.

Initially, the ANSI committee believed that the RPI and NIST results were somewhat inconsistent and the ANSI white curve definition should not be altered. Recently, the committee recognized that for the perceived or preferred white, it can be beneficial if ANSI chromaticity specifications provide guidance or recommendations. The recommendation for perceived or preferred white light is the basis for the planned update to ANSI C78.377.

In these two previous research projects, the observers' input to the low CCTs, 2500K and 2200K, were not studied. Even though both sets of research results indicated a more pink white is common in the low CCT range, it did not explain how human eyes see the whiteness in very warm white or yellow-hued light illumination.

The experts in the ANSI ad hoc group have agreed that fundamentals of the ANSI C78.377 - including a defined ANSI white curve, nominal CCTs, and associated tolerances in quadrangle or circular fashion should remain unchanged. The update is needed to add to the preferred or perceived white center-points curves. Without giving users the conclusively fixed targeted center-points, an approach similar to the flexible nominal CCTs can be used. 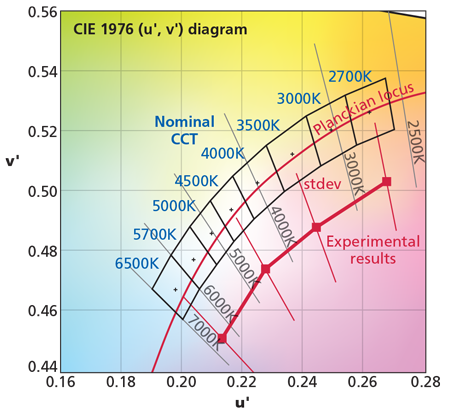 FIG. 3. Results of the NIST experiment plotted on ANSI C78.377 chromaticity specifications for SSL products. NIST results were developed according to the most preferred white points in a typical interior room environment with various colored objects, when the subjects were fully adapted to the illumination.
Source: Y. Ohno and M. Fein for National Institute of Standards and Technology (NIST).

The ANSI committee's work for continuous improvement of the chromaticity standard is a great indication of how the standard and lighting technology and applications are closely related and how the interested parties collaborate. LED lighting is an evolving technology and user input for preferred or perceived effects, as well as other human-centric information, is still in the stage to be gathered, analyzed, and implemented. The standard development community has been actively engaged in this dynamic cycle from technology to product to standardization, and then further improvement for the next cycle.