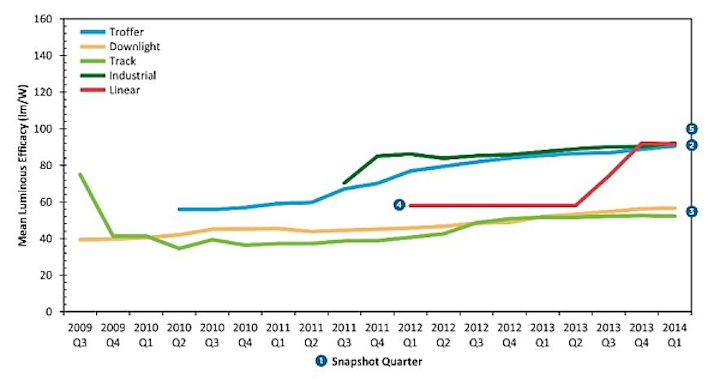 The US Department of Energy (DOE) has issued a new Caliper Snapshot report on indoor LED-based fixtures with the data based on products in the agency's LED Lighting Facts program. The DOE has also added yet another Caliper report on LED-based T8 replacement tubes, and said the solid-state lighting (SSL) alternative only delivers attractive return on investment (ROI) in areas with high utility rates or in applications with long operating hours.

The Caliper Snapshot Report on indoor luminaires covers downlights, industrial low-and high-bay fixtures, track lights, troffers, and linear fixtures such as pendants and strip lights. The DOE said the five categories account for most of the indoor luminaires represented in the Lighting Facts database and also for one third of the total LED-based products in the program. 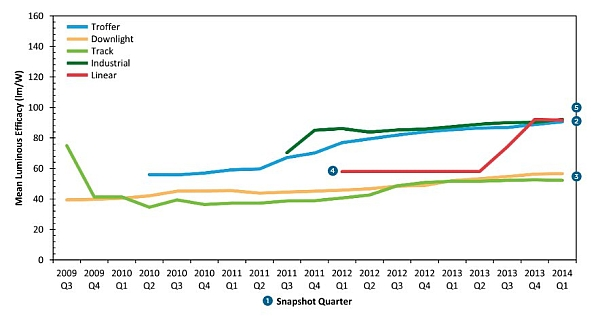 Not surprisingly, the efficacy of the SSL products continues to escalate with the mean efficacy of listed products now at 86 lm/W. For comparison, a Caliper study on LED troffers announced in April 2013 reported a mean efficacy of 80.3 lm/W. Mean efficacy has doubled since the inception of the Lighting Facts program.

Perhaps more significantly, the DOE reported that 70% of the listed products meet relevant energy efficiency guidelines such as Energy Star from the US Environmental Protection Agency (EPA), and the DesignLights Consortium (DLC) formed by utilities. For example, more than 71% of the troffers exceed the 85 lm/W level required in DLC. Almost 90% of the industrial lighting products meet DLC guidelines.

One surprise came in the area of the relationship between excellent color quality and efficacy. Generally high CRI equates to an efficacy penalty. But in the area of downlights, the DOE reported that the products rated at 90 CRI and above feature mean efficacy of 58 lm/W whereas the entire universe of downlights had a mean efficacy of 57 lm/W. Clearly, SSL manufacturers are finding ways to efficiently deliver good color quality.

Meanwhile, the DOE published yet another in a series of Caliper reports on the LED T8 sector. Back in April, the DOE had studied 31 LED T8 lamps with a focus on light distribution, CCT, and CRI. The most recent report (Report 21.3 that is essentially an addendum to Report 21) is based on a 10-year lifecycle analysis of how LED tubes compare with fluorescent lamps.

The report takes into account the cost premium of LED lamps as well as the differences in energy usage and maintenance costs. A two-lamp troffer with LEDs is projected at 38W whereas the fluorescent alternative requires a 51W power draw.

The report includes a series of tables that lighting specifiers can use to compare the technologies in a scenario that matches the application at hand. But in summary the DOE said that the LED alternative is mainly attractive in areas with high utility rates or in installations where the lights burn for extended hours.