Remote-phosphor technology offers potential advantages to SSL such as better color uniformity and maintenance, and, as Jianzhong Jiao explains, may soon have the benefit of an IES testing standard such as the LM-80 standard defines for LEDs. 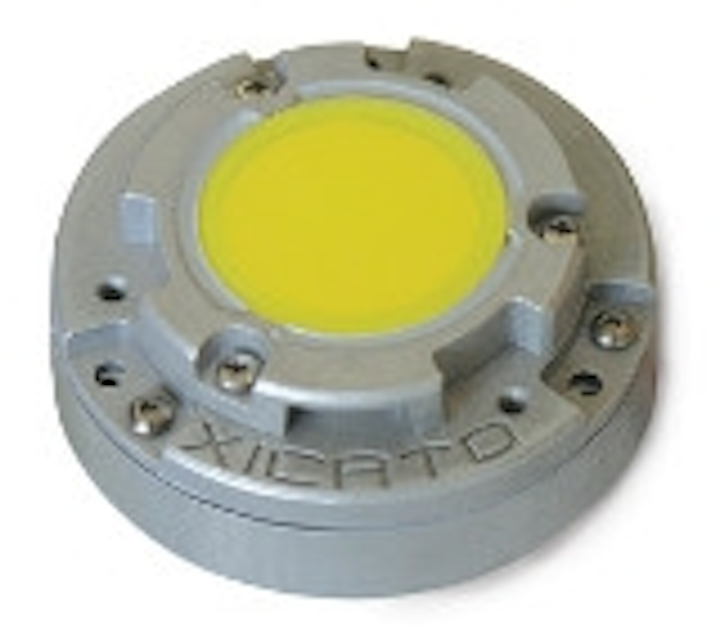 This article was published in the November/December 2013 issue of LEDs Magazine.

Visit the Table of Contents and view the e-zine version in your browser. You can download a PDF of the magazine from within the browser e-zine.

The solid-state lighting (SSL) industry has made great progress with standards for characterizing LED source and luminaire/lamp performance, along with standards to project lumen maintenance over time. LED-based modules that use remote-phosphor technology can be tested using the LM-80 standard defined for LEDs. But going forward, the IES is pursuing a separate LM standard that will specifically apply to remote-phosphor optics.

"Remote phosphor" commonly refers to a configuration of an LED or an LED lighting product, such as an LED lamp, a light engine, or a luminaire, that uses a phosphor that is not in direct contact with the LED die. The phosphor can be formed with a substrate to become a component that is mechanically separable from the pumping LED die or package. This component, sometimes with an additional enclosure with internal surface reflective coating called the mixing chamber, is used in conjunction with blue- or UV-pump LEDs to construct LED lighting products. Some potential advantages of using a remote-phosphor configuration are less thermal impact to the LED die, which improves die and phosphor combined light-extraction efficiency; more uniform luminous intensity distribution; and spatial color uniformity.

A remote-phosphor device, with or without an additional mixing chamber, converts all or some of the light emitted from the LED into a new spectrum. The spectrum emitted by the LED and phosphor package then creates the desired color or quality of light.

Typically, the LED die emit a narrow spectral range, and after conversion by phosphors the overall spectrum may have wider or multiple peaks. By selecting different LED and phosphor combinations, different CCT and CRI values can be achieved. In the remote-phosphor approach, typically the phosphor powder is embedded in or coated on the surface of a glass, plastic, or silicon substrate. When phosphor is coated on the surface, a binding material may be used. The mixing chamber is an additional enclosure with reflective material that is coated on the interior surfaces to achieve higher, more uniform light output.

Standards for LED source-level and lighting product-level testing methods have been developed — IES LM-80 and LM-84 (not yet published) — to standardize characterization of long-term LED and lighting product luminous-flux and color maintenance. The calculation methods for projecting long-term luminous-flux maintenance have also been developed in IES TM-21 and TM-28 (not yet published). Testing LED lamps, light engines, and luminaires for lumen and color maintenance is costly, and varying configurations of LED lighting products often lead to retesting each iteration of a new product. Longer testing duration and costly testing are barriers to quick market penetration.

The remote-phosphor device — separate from the LED source — can be tested for its degradation behavior. A working group has recently been formed in the IES Testing Procedures Committee (TPC) to develop a testing standard, a new LM document that is similar to LM-80 that will provide the method for measurement of luminous flux and color maintenance of remote-phosphor devices under described operating conditions. Similar to LM-80, this new LM document will not cover the determination of the performance rating of products. It will not provide guidance or make any recommendation regarding predictive estimations or extrapolation for lumen maintenance determined from actual photometric measurements.

What should be the critical control parameters to monitor remote-phosphor device decay behavior? This can be a comparison to the LM-80 test for LEDs where the two critical variables were identified as the LED's driving current and the case temperature. Physics and testing data have demonstrated that these two parameters are the basic causes of LED luminous-flux and color changes over time. In general, higher driving current leads to faster decay — same as higher case temperature, which directly relates to LED junction temperature.

For the LED source level and Energy Star, the US Environmental Protection Agency (EPA) published the guidance for the LM-80 data supporting qualification of LED lighting products in September 2011. Based on industry practice, the guidance provides detailed descriptions for the successors to previously tested LED sources. For example, if the LED source changes in materials or configurations or even operation conditions, etc., the new LED must be retested per LM-80.

To assist the specifiers such as the Energy Star program in establishing more appropriate or effective specifications when remote-phosphor technology is used, the National Electrical Manufacturers Association (NEMA) Lighting Division is developing a white paper to make recommendations from the manufacturers' perspective. Besides disclosing the technical information of the remote-phosphor technology to educate users, the white paper intends to list the variations of LED remote-phosphor lighting products that may result in the need to be retested.

Because the remote phosphors are always used in conjunction with LED sources, the variations that contribute to the LED lighting products may be grouped into two areas: LED variation and phosphor variation. The NEMA white paper will recommend considerations for requiring a retest particularly for phosphors, more specifically described as the remote-phosphor device and the mixing chamber. For example, when the substrate material, type of phosphor, method of binding phosphor to substrate, shape, thickness, etc., changes, the device may need to be retested. For the mixing chamber, if the reflective material, shape of the chamber, etc., changes, it may also need to be retested.

These new standard documents in development are a reflection of industry practice. When the new LM for the remote-phosphor testing procedures is established, more consistent test data can be collected. The NEMA white paper also gives rational information when developing specifications for qualifying remote-phosphor devices used in LED lighting, without the need to test the entire luminaire.

The work will not be complete without a reliable or reasonable method of calculating long-term projections using the collected test data. In all cases, it is not practical to assume that remote-phosphor devices can be tested to the end of lumen maintenance life. Therefore, it is necessary to develop calculation tools similar to TM-21 and TM-28. There will be more challenges for developing such tools. Besides mathematical models based on physics and empirical data, there must be sufficient data to make statistical calculations to exceed the confidence level for projection.

Because remote-phosphor applications are newer, the industry will need enough time and practice to catch up to when TM-21 was established for LEDs. We should be confident that we will be able to come up with a projection method that is beneficial to both manufacturers and users in the long run.