American Petroleum Institute tells members to “minimize circadian disruptions.” That means strip down the blue, at least one expert says. 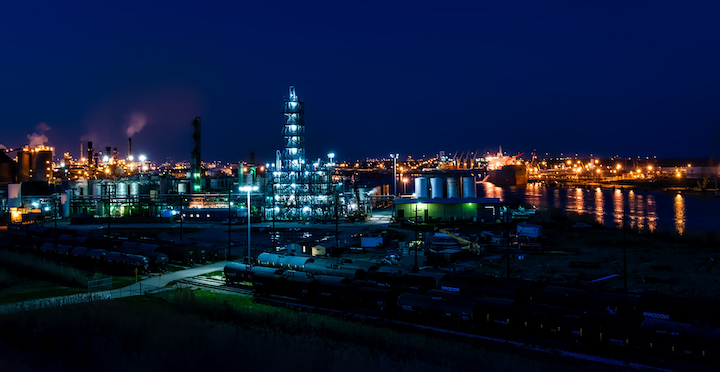 Refineries have to be well lit for safety reasons at night, so there’s no other way to mitigate circadian disruption than by minimizing the blue content, says Circadian Light CEO Dr. Martin Moore-Ede. (Photo credit: Image by David Mark from Pixabay.)

API, the trade association for the US oil and gas industry, issued the new stipulations early last month in a Recommended Practice (RP) document entitled “Fatigue Risk Management Systems for Personnel in the Refining and Petrochemical Industries,” also known as RP 755.

The new guidelines are the second edition of RP 755, which API first issued in 2010, approved by the American National Standards Institute (ANSI).

In the 2010 edition, API prescribed minimum lux levels at night of between 300 and 500 lx, to ensure well-lit areas for worker safety and alertness. The new second edition adds circadian guidelines that effectively limit exposure to blue enriched light at night. Research has shown that exposure to blue spectra can disrupt sleep and cause harmful health effects, although scientists continue to debate the details.

The Circadian Light release quoted the API’s Dr. Steven Lerman as saying, “The second edition added the requirement that light sources at night should minimize circadian disruption.” Lerman was the chairperson of API’s RP 755 committee.

While the API does not prescribe how to minimize the disruption, Circadian Light CEO Dr. Martin Moore-Ede told LEDs Magazine that the prescribed high light levels preclude dimming as a measure to combat circadian disruption.

“Therefore, you have to remove blue,” said Moore-Ede, who also served as an advisor to the RP 755 committee. “If you’re going to put 500 lux in the workplace all night long for 12 hours, you’re going to disrupt the circadian rhythm — there’s huge science on that. You’re going to shoot the circadian clock to the other side of the planet, unless you do something about it.”

“The only practical way to meet the new ANSI requirement of well-lit workplaces that minimize circadian disruption at night is to use white-light fixtures that are spectrally engineered to emit less than 2% blue content at night,” he said.

To help usher in light sources with reduced blue, Circadian noted in its press release that Underwriters Laboratories (UL) has issued a new verification mark — “Less than 2% blue light content at night.”

While the UL verification tag should support the development of products that meet the ANSI-approved API RP 755 guidelines, ironically UL currently has another initiative underway that is clashing with ANSI-related efforts by the Illuminating Engineering Society (IES) to establish circadian lighting standards. IES is drafting standards based on ANSI processes, while UL is drafting its own circadian lighting standards not based on ANSI processes, a move that has drawn the ire of the IES.

Many people consider API working standards to be a model, so the new lighting recommendations could sway other industries to adopt similar measures. The API’s 600-plus members employ more than 10 million people in the US.

The API’s RP 755 is a broad set of both “should” and “shall” practices that includes many aspects of worker safety — not just lighting — such as limits in shift lengths, fatigue management, and risk assessment and mitigations. The original 2010 edition was a reaction to BP’s Texas City refinery accident in 2005.