Look ma, no lights: Current is supplying sensors and data analytics to help the telecommunication company win smart city jobs in Canada. Not a luminaire in sight in the announcement. 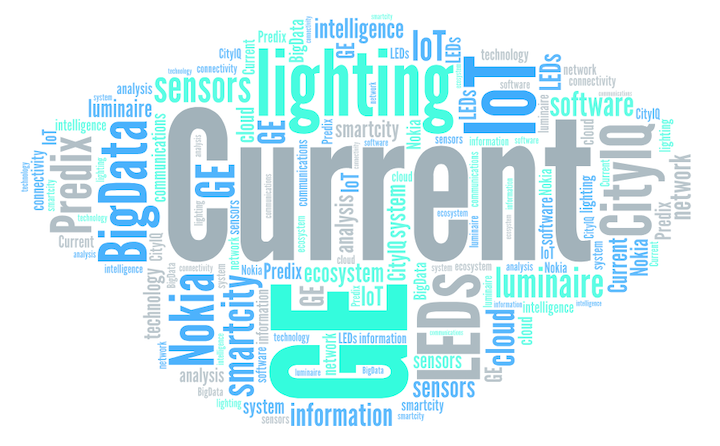 Look ma, no lights: Current is supplying sensors and data analytics to help the telecommunication company win smart city jobs in Canada. Not a luminaire in sight in the announcement.

A lighting company has again entered a deal in which it is not providing lights but is playing a key information technology role: GE’s Current group said it is supplying sensors to telecoms firm Nokia to mount on poles for remote data analysis of things like traffic, crime, and air quality.

Interested in articles & announcements on smart cities and lighting?

The agreement, in Canada, sets up Nokia as the prime contractor on any outdoor smart-city projects that Nokia and Current might win in the country.

Nokia will install Current’s CityIQ-branded sensors on street furniture such as light poles and will use its cellular network to help shuttle around data collected by those sensors. The data ultimately travels via wired connections to a remote Current datacenter for analysis by GE’s Predix cloud system.

Current — its full name is Current, powered by GE — refers to the whole package of sensors and cloud analysis as its “CityIQ platform technology.”

In announcing the partnership, Current omitted any reference to luminaires. It made no mention of whether GE lights could at some point enter the picture, although that could conceivably happen. Rather, it emphasized Internet of Things (IoT) functionality. 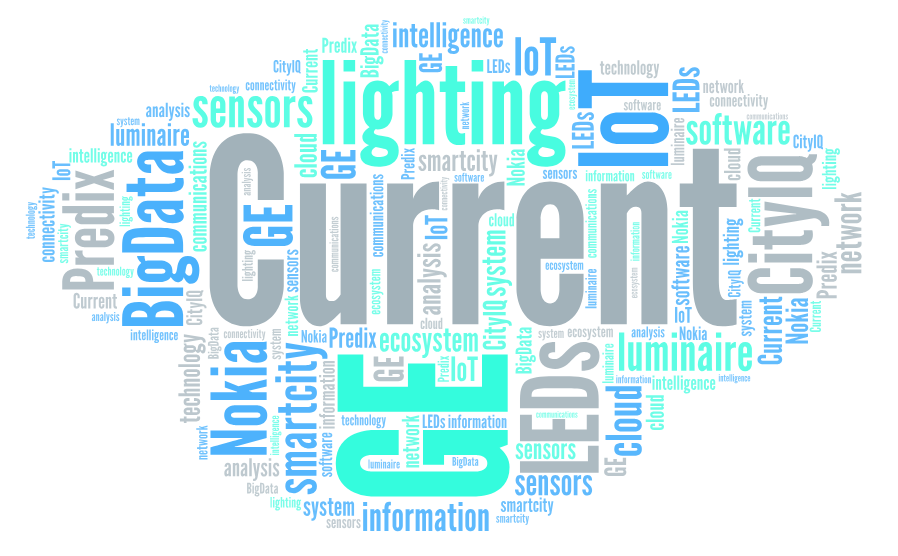 More and more in lighting, it’s all about the data. That’s Current’s focus as it targets smart city jobs with Nokia in Canada.

The sensors will be mounted “externally” from the lights, a Current spokesperson told LEDs Magazine.

It is another example of how the lighting industry, in its attempt to leverage LED lighting technology and infrastructure into an IT network, is so willing to do so that it will go to the extreme of leaving out lights altogether.

Current itself recently engaged in a similar project, providing sensors to the City of Portland to mount on street lights for traffic analysis, working with Intel and as a subcontractor to AT&T.

In another known case, Osram is providing Bluetooth communication technology, but not lights, to the Swiss retail company that owns Guess and Marc O’Polo stores, to help the retailers track and engage indoor shoppers.

GE formed Current in October 2015 precisely to distinguish its smart, Internet-connected lighting business from conventional lighting. As such, Current was formed as more than a lighting company, although lighting has remained at its core, and many Current jobs also include GE luminaires, such as at Walmart.

In fact, almost immediately after forming Current as a broad initiative aimed tying together data from a number of energy-consuming operations such as lighting, solar panels, electric car batteries, and other energy storage devices, GE began scaling back its scope to revolve chiefly around smart lighting. Roughly a year ago, it recombined Current’s revenue reporting with that of conventional lighting. Around the same time, the executive responsible for the overarching digital and data strategy, John Gordon, quietly left Current to head up consumer electronics for audio company Bose, according to his LinkedIn page. That happened soon after GE’s former IoT- and data-driven CEO, Jeff Immelt, resigned.

GE is in the process of finding a buyer for Current, part of the parent company’s sweeping sell-off all groups other than aviation, power, and renewable energy.

Nokia and Current have not yet won any actual smart-city jobs together, the Current spokesperson clarified for LEDs. The partnership does not formally include a network operator — Nokia is a telecoms equipment maker — unlike in the US, where Current works as a subcontractor to AT&T, such as at Portland.

Current has had checkered success with smart street lighting. A 2015 pilot in San Diego led to the city’s decision in early 2017 to proceed full-on with 3200 sensors and 14,000 new light fixtures. Conversely, in the same timeframe, a Jacksonville trial ended with the city deciding to not proceed.

Soon after, Current launched a small smart street lighting trial with Atlanta in April in 2017, including about 1000 lights. LEDs is awaiting an update from Current on that project, which marked the beginning of Current’s decision in the US to approach smart street lighting jobs as a subcontractor rather than as prime contractor, a route it is taking in Canada via Nokia.