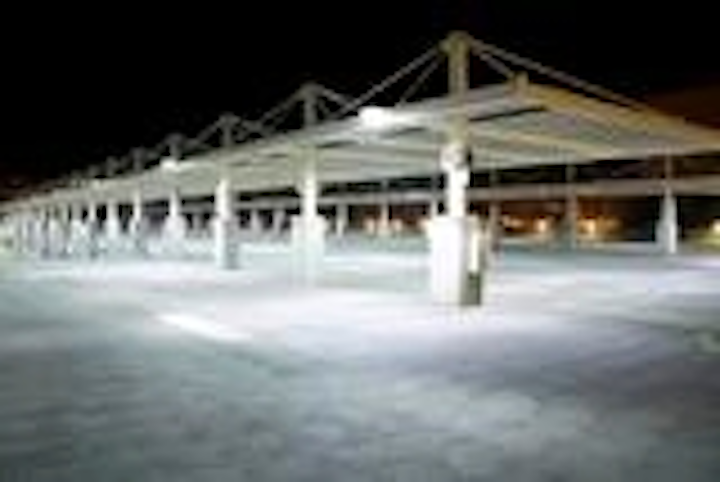 The 50 LED light fixtures, developed by Ruud Lighting/BetaLED, feature activity-sensing technology, provide enhanced nighttime visibility, and reduce energy consumption by up to 80% compared with the metal-halide fixtures that were replaced, according to UC Davis.

Safety can be improved with the two-level activity-sensing system. When motion is detected and the higher light mode is activated, the change in the visual environment alerts people nearby. Drivers, pedestrians and security agents now have an indicator when there is activity in the area.

"Even at half power, the LED fixtures are delivering plenty of light to the space. We may be able to cut levels further, saving even more electricity and lengthening fixture lifetimes,” said Michael Siminovitch, director of UC Davis' California Lighting Technology Center and a professor in UC Davis’ Design Program.

In related news, Cree has announced that UC Davis is joining the LED University program.

PG&E offered incentives as part of a University of California system-wide energy initiative and supplied partial funding based on demonstrated energy savings and Watt Stopper/Legrand of Santa Clara, Calif. supplied the occupancy sensors. Cree provided the LEDs to Beta Lighting.

Part of the Design Program at UC Davis, the California Lighting Technology Center is a research and education facility that focuses on the application of energy-efficient lighting and daylighting technologies through research, development, demonstration, outreach, and education in partnership with utilities, manufacturers, end users, builders, designers and governmental agencies.

Watch the video:
The lights and ribbon cutting at UC Davis