US research team aims to close the “green gap” in LEDs

A team of US researchers has received $1.8 million in federal funding to improve the energy efficiency of green LEDs. 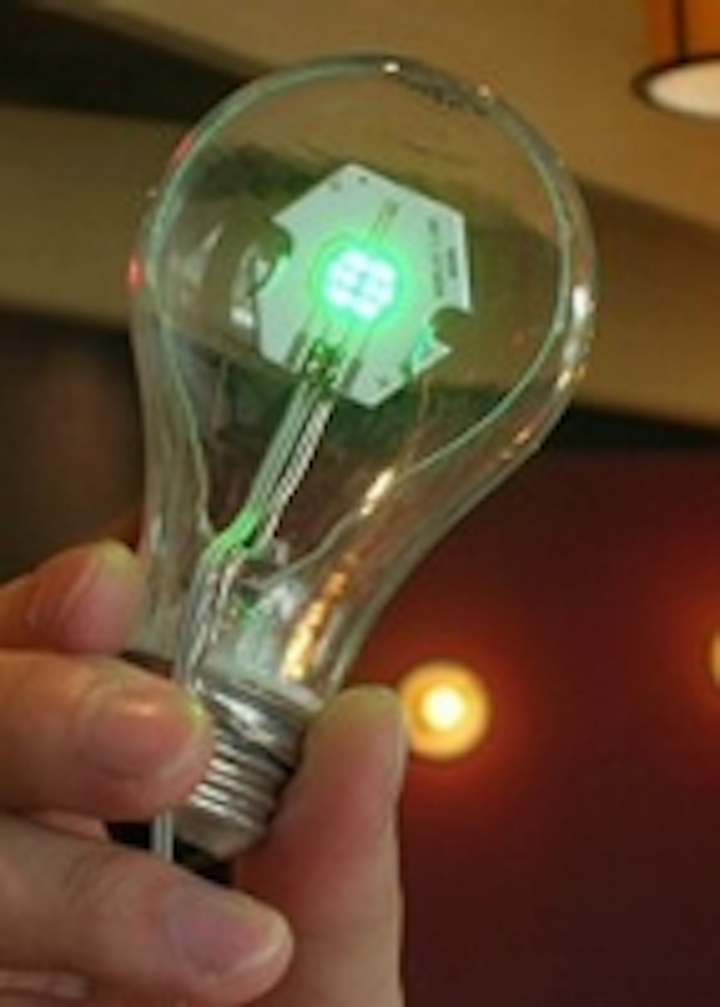 A project entitled “High Performance Green LEDs by Homoepitaxial MOVPE”, which aims to improve the performance of green LEDs, has been awarded $1.8 million as part of the U.S. Department of Energy’s (DOE) Solid-State Lighting program. The team, led by Christian Wetzel and Fred Schubert of Rensselaer Polytechnic Institute (RPI), aims to close the “green gap” in LED technology by doubling or tripling the power output of green LEDs in three years.

Researchers have made major strides in advancing the design of red and blue LEDs, but the technology behind green LEDs has lagged behind substantially, says Wetzel. This has important consequences for applications such as illumination or backlighting of displays that may require the use of high-performance red, blue, and green LEDs to make white light.

The DOE’s solid-state lighting roadmap calls for the development by 2025 of advanced solid-state lighting technologies that are much more energy efficient, longer lasting, and cost competitive than conventional lighting technologies. The prime contender to meet this goal, according to Wetzel, is a white-light unit made from a combination of red, blue, and green LEDs – hence the need to plug the so-called "green gap."

Wetzel notes that green light is an essential piece of the puzzle because it addresses the peak of the human eye’s sensitivity, providing balance to the colors of red and blue light. He plans to focus on aspects of the "piezoelectric effect" -- a property of some materials that causes them to produce an electrical field when pressure is applied. By controlling this effect, he and his colleagues hope to develop a process to make higher-intensity green LEDs that convert electricity into light more efficiently.

“Making lighting more efficient is one of the biggest challenges we face,” says Wetzel, who is the Wellfleet Career Development Constellation Professor, Future Chips, and associate professor of physics at Rensselaer. “Substantial reductions in the nation’s dependence on primary energy imports will be possible once highly efficient solid-state light sources replace wasteful incandescent and fluorescent lighting.”

Another member of the research team is Kyma Technologies, a North Carolina company that supplies high quality bulk GaN-based substrates and epiwafers. Key improvements in the development of green LEDs based on III-nitride materials are expected to arise from use of Kyma’s low-defect-density native GaN substrates.

Under the program, Kyma will continue to develop its patented manufacturing technology for native crystalline GaN materials and will also provide both polar and non-polar native GaN substrates to the Rensselaer researchers for epitaxial growth, device fabrication and device performance testing. The addition of native non-polar GaN substrates to Kyma’s product line was announced earlier this year.

Experts recognize the potential of non-polar GaN to enable commercially important LED performance improvements. However, the efficiency of initial devices made from non-polar GaN-based materials has been limited by the presence of defects which result from fabrication on non-native substrates such as sapphire or silicon carbide (these are the commonly-used starting materials in commercial LED production). Use of Kyma’s native GaN substrates should enable reduction of such defects by a factor of over 10,000 compared to such non-native approaches.

Drew Hanser, Kyma's co-founder and chief technology officer, Hanser commented, “While much progress has been made in developing blue and green LEDs on sapphire and silicon carbide substrates, much more progress is required, especially in the green, before nitride LEDs can begin to realize their full commercialization potential. We believe that Kyma’s native GaN substrates have the potential to enable the development of green LEDs with the kind of price point and operating characteristics that fulfill the promise of solid state lighting for general illumination.”