The China LED wafer market: A story of commoditization (MAGAZINE)

LUKE JOHNSON explains how a commoditization approach to high-quality LEDs for solid-state lighting has failed in China. 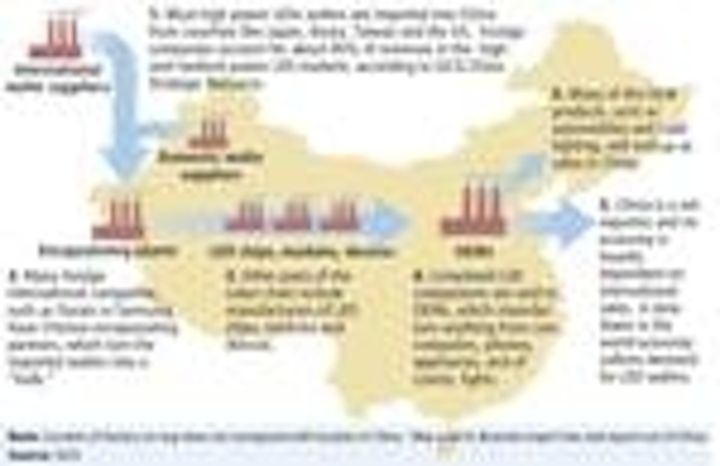 In 2010, the future of the Chinese LED market was looking brighter than ever. The world economy was recovering from the “Great Regression,” new environmental and efficiency initiatives outlined in the country’s twelfth five‐year plan would soon go into effect, and Chinese central and local governments were actively supporting the procurement of high‐tech production technology across all industrial segments. Seeing LEDs and solid-state lighting (SSL) as a growth sector, the government set out to control the entire value chain, but not all went as planned.

Back in 2010, Chinese policy makers believed that if they applied the same commoditization tactics on the high‐tech green LED wafer market as they had done with so many other industrial products (solar panels, motors), then Chinese LED companies could muscle foreign companies out of the value chain and supply China’s downstream industries themselves. Chinese leaders wanted their country to produce the semiconductor material, form the wafer, encapsulate the bulb, create the component, make the TV and sell it to customers abroad. They wanted to own the entire value chain, from raw material to smart phone, from wafer to automobile (see Fig. 1).

However, slow export sales from China, lack of technological know how, and over expansion would combine to keep significant market share in the hands of multinationals, streamline the value chain, and perhaps even hinder China’s future ability to innovate.

This story of commoditization started over two years ago. This was a time when the world was coming out of the trough created by the great recession. Chinese exports had dipped and international demand for TVs, appliances, and lighting was expected to rebound. A five‐year plan with major sections focused on incorporating green technology had just been published. There would be a government‐driven push for efficient products and subsidies for high‐tech industries. Finally, the existing production capabilities of Chinese LED wafer suppliers were meager. For LED suppliers in 2010, it was the time to act. And so they did.

Chinese authorities are not shy about rolling up their sleeves and tinkering with markets. To wrestle market share away from imports and multinationals, the Chinese planners applied the same economic strategy they had applied to other other high‐tech green products – volume. Increasing production volumes will push prices down and commoditize the product. With high enough output, product differentiation will shrink, and internationally recognized products will lose their advantage. Presumably American, German, Japanese and Taiwanese giants such as Cree, Osram, Nichia and Epistar simply would not be able to compete with the cheap domestic products. It worked for solar panels. Why not LEDs?

These policy makers started by promoting upstream industries, downstream industries and everything in between. Local governments supported regional LED suppliers by enacting policies that called for municipal lighting projects to only use LEDs made by a regional manufacturer. Some, such as those in Guangdong, went so far to demand that all public lighting use only LEDs in 3‐years time.

Besides directly funding LED projects, the government offered money back to customers who purchased efficient LED TVs and other efficient appliances, indirectly promoting downstream sales. But more than anything else, subsidies on expensive LED wafer production equipment, particularly the metalorganic chemical vapor deposition (MOCVD) system, made manufacturing LEDs more accessible than ever. Official government estimates also lured suppliers in expanding, by predicting that the total LED market would be worth RMB 400 billion (around $63 billion today) over four years, a massive sum.

This combination of expected growth in exports after 2010, optimism from the five‐year plan, and government backing in just about every form fueled capacity and begin the first stage of commoditization. Over the next two years, the number of MOCVD tool purchases increased dramatically. In 2010, there were about 220 MOCVDs owned across 16 Chinese companies. By the end of 2011, the same 16 companies had just short of 500 units.

Output up, prices down

With such a massive increase in production capacity, prices began to drop as supply outweighed demand. LED prices declined by 10‐15% every year since 2010, with some sectors, particularly blue and white low power LEDs, dropping more rapidly.

Domestic wafer suppliers now find that as the total production capabilities of competitors increased (and product differentiation decreased) pricing power of companies began to diminish. As market power decreases, so does the company’s mark‐up, and companies were finding their margins squeezed. One domestic supplier noted: “Companies which manufacture blue LEDs have basically been squeezed to the point where they do not make any profit…There is not a very positive outlook in the LED wafer market.”

Shandong Inspur Huangguang Optoelectronics, a large domestic manufacturer of LEDs, had 16 MOCVD tools in 2010. By the end of 2011, this company had procured another 16 MOCVD systems. In the 2011 business year, however, this company ran their factory at an average of about 44%. This means most of their production equipment had been sitting idle and not returning on the investment.

As prices and margins continue to decrease, smaller companies in the middle stages of the value chain will be forced to either leave the market or become acquired by larger companies. Concurrently, larger companies will look to expand their range of offerings. APT, a domestic company, has already moved toward this trend. In 2010, the company only offered LED chips, but has expanded production capabilities to include LED devices.

Cree, an American company, is stretched over many stages of the chain, occupying materials, chips, wafers, modules and component supplies. Other companies, such as Samsung, control the entire value chain, from chip production, to the OEM application.

Consolidation and mergers will be a slow but necessary process. Over the next five years or so, the market will become more streamlined and more concentrated. Instead of five different steps, it will be reduced to three: a front‐end, a back‐end and an application step (See Fig. 2).

The story of commoditization is commonplace in China, but it may not be the best way to control the entire value chain, as was its initial intention with SSL. Instead, international wafer and LED suppliers will remain key players, since they will still be the only other suppliers capable of manufacturing the high lumen, high quality, high‐intensity white LEDs which comprise over 70% of the total LED market by revenues (but only about 7% by sales volume). Commoditization does reduce prices but it can compromise a company's technological advancement.

From an investment standpoint, China has spent heavily in expanding its production capabilities. If these investments were to fail, then there would be little incentive to invest further and try to develop a better product, a product which is competitive with those produced by foreign companies. For this reason, commoditization will fail to put the upper end of the value chain into the hands of domestic Chinese companies. LEDs are showing to be resistant to China's commoditization economic model.