Wang Shen and Jamie Fox look back at 2017 and chronicle dramatic changes in the MOCVD equipment sector, with upstart AMEC grabbing a strong position after years of a relatively stable playing field on the supplier side of the LED manufacturing space. 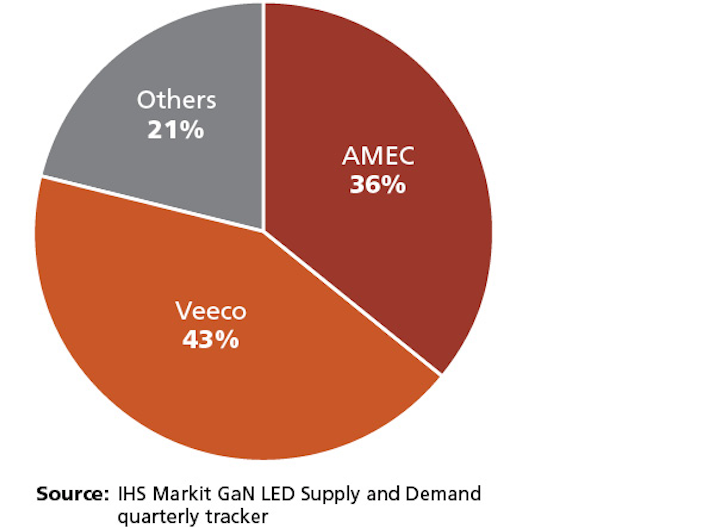 WANG SHEN and JAMIE FOX look back at 2017 and chronicle dramatic changes in the MOCVD equipment sector, with upstart AMEC grabbing a strong position after years of a relatively stable playing field on the supplier side of the LED manufacturing space.

If the solid-state lighting (SSL) sector looks back at the MOCVD (metal-organic chemical vapor deposition) industry in a couple of years, it's likely that many people will see 2017 as a key year. The LED market was thriving through 2017 and competition between top suppliers was as fierce as always. Despite the brisk activity, most of the LED manufacturers, or what we call the demand side, remained in the same or similar ranking positions to prior years. The real shakeup of suppliers actually occurred on the supply side - specifically, in the LED manufacturing equipment sector. Let's consider the upheaval, including the success of an emerging player while existing stalwarts lost share and/or swapped their company focus.

MOCVD systems or reactors are used in the LED industry to grow the epitaxial layers or films that ultimately comprise the LED semiconductor architecture. The equipment vendors have advanced MOCVD science, steadily attempting to increase throughput and improve component performance. Still, Veeco and Aixtron have shared the dominant portion of the market for years. 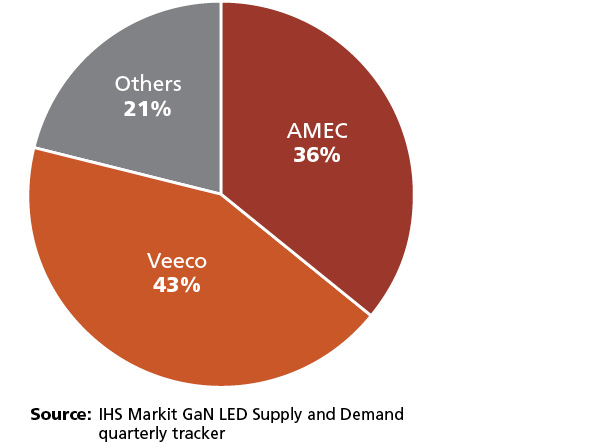 Although not yet recognized in the counting method (as reflected here), AMEC units ultimately surpassed former MOCVD market leader Veeco during 2017.

The top news in 2017 was the rise of AMEC (Advanced Micro-Fabrication Equipment Inc). In addition, Aixtron placed less focus on gallium-nitride (GaN) LED MOCVD systems and shifted more to power-semiconductor MOCVD systems. The other major story was the lawsuits between AMEC and Veeco. These changes can be expected to bring more uncertainties to 2018. A look at the details will provide more insight.

From being nearly unknown to becoming one of the major suppliers in the MOCVD industry, 2017 was an incredible year for AMEC. The Shanghai-based high-tech company succeeded where many have tried and failed: by finally breaking the longstanding GaN LED MOCVD market dominance of Veeco and Aixtron. AMEC was established in 2004 with venture capital from a Shanghai government fund and Silicon Valley. The company has facilities in China, Taiwan, and South Korea. The major focus of AMEC has been on etching machinery for semiconductors for many years since establishment. However, with the growth of AMEC's MOCVD business, revenue from MOCVD sales accounted for about half of the total company revenue in 2017, much higher than in 2016.

All of AMEC's products were shipped to Chinese LED manufacturers. AMEC is thought to have shipped more than 100 chambers in 2017, but according to the counting method of IHS Markit, only those shipments whose revenue is already recognized are counted. Since the revenue recognition can take 6-9 months after shipment, especially for newer entrants and new tool designs, those chambers that were shipped out but not recognized in 2017 will be counted in the next year.

The sales boost of AMEC tools was partly driven by the strong market demand in China and partly by the fact that 2017 was the year in which Chinese LED companies judged that AMEC tools had reached an acceptable level of reliability and productivity. In 2017, these suppliers expanded their production capacity and further lowered the price of packaged LED products in lighting and other areas, with mid-power 2835 packaged LEDs often being available in China for less than US $0.01. Provincial governments have shown great support to these LED vendors in terms of policy and finance. This no doubt did bring quite a lot of business opportunities to MOCVD suppliers, especially local suppliers such as Tang Optoelectronics Equipment Co. (TOPEC) and AMEC, who can provide high-quality products and easily accessible local technical support.

Facing the strongest ever market competition from both Chinese suppliers and Veeco, and having already steadily lost market share to Veeco over the years since its heyday in 2010 and before as the market leader, Aixtron choose another strategy, fading away from the GaN LED MOCVD market and putting more emphasis on power semiconductors and ROY LEDs (i.e., red/orange/yellow, usually AlInGaP - aluminum indium gallium phosphide - rather than blue/green/white). It would be an exaggeration to say Aixtron has exited the GaN LED MOCVD market since it will continue to supply to some customers, but it is no longer a major force in the area. In 2017, Aixtron shipped in total 32 units of GaN LED MOCVDs, which was far behind Veeco and AMEC.

The other big story in 2017 was the lawsuits between AMEC and Veeco. In the beginning, Veeco raised a patent infringement lawsuit which was not directly against AMEC but its major wafer-carrier supplier SGL Group in Germany. According to Veeco, SGL infringed Veeco's four patents covering the structure of its MOCVD tool and design of its carbon wafer carrier. As a preliminary result, the US District Court for the Eastern District of New York granted Veeco's motion for a preliminary injunction against SGL's related products.

The New York verdict mainly affected only AMEC but not TOPEC, as TOPEC does not use SGL wafer carriers, but most AMEC tools were using wafer carriers from SGL. AMEC apparently took quick actions to eliminate the negative effects, such as turning to alternative suppliers and adapting its MOCVD tools to new solutions. However, this verdict still resulted in some damage to its supply chain.

As a counter-attack, AMEC sued Veeco Shanghai at Fujian High Court in China for another patent infringement case, in which AMEC claims that Veeco's mainstream product EPIK700 uses similar technology to a certain AMEC design. They both hold patents of this design in China, but the Veeco patent was granted later; therefore, AMEC appealed for the invalidation of this Veeco patent.

The recent verdict from Fujian High Court banned Veeco Shanghai from importing implicated EPIK700 series tools. Veeco is largely expected to phase out EPIK700 in the future and instead sell its newer EPIK868 series, so the question of whether this ruling will or will not ultimately affect the 868 machines is the most important aspect of the dispute. AMEC has appealed for further injunctions on the newly released Veeco EPIK868 series, already ordered by several customers in China.

In the latest news, AMEC announced that the Patent Re-examination Board (PRB) of the State Intellectual Property Office (SIPO) in China, ruled on Jan. 23 that all patent claims relating to patent number ZL 01822507.1 held by Veeco Instruments Inc. (Veeco U.S.), and titled "Susceptorless reactor for growing epitaxial layers on wafers by chemical vapor deposition," are invalid. AMEC also reported that two EPIK700 MOCVD tools were detained by customs on their arrival in China.

These verdicts from the courts therefore bring lots of uncertainties and pressures to the LED industry in 2018 from the supplier side, especially at the moment when most major Chinese manufacturers are expanding their production scale. Veeco can no longer sell the EPIK700 series in the China market and arguably faces concerns about EPIK868 sales to China as well. AMEC also cannot ship all its A7 MOCVD modules as scheduled because of the broken supply chain. For other suppliers such as TOPEC, this is no doubt a good opportunity to expand their businesses.

But for AMEC and Veeco, a deadlock situation is probably not sustainable. IHS Markit expects that AMEC and Veeco will find a compromise while each protect their own interests. Hopefully, the crisis can be solved with smart and peaceful methods that will not harm the industry and value chain. Otherwise, from a long-term perspective, both companies will suffer.

WANG SHEN is a senior analyst and JAMIE FOX is a principal at IHS Markit.

Editor's note: It was announced on Feb. 8, 2018 that AMEC, Veeco, and SGL had reached an agreement to settle pending patent disputes. At the time this article was written, patent disputes were still pending and settlements had not yet been disclosed.