Research studies focused on LED system reliability at Rensselaer's Lighting Research Center reveal that some LED products available on the commercial market can fail much sooner in some applications than manufacturers' specifications would suggest to buyers. 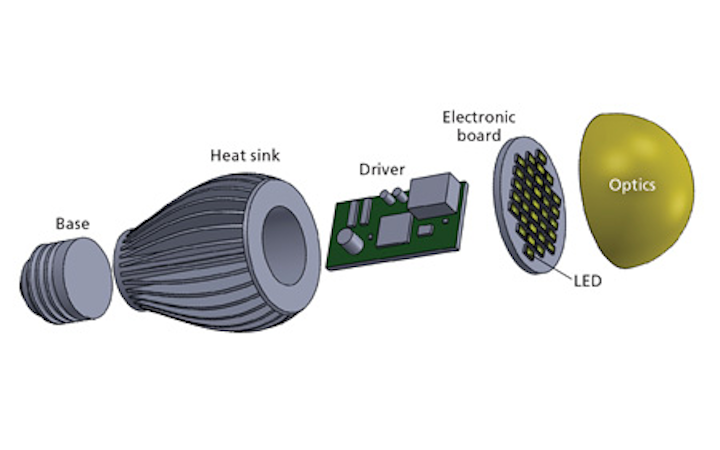 Research studies focused on LED system reliability at Rensselaer's Lighting Research Center reveal that some LED products available on the commercial market can fail much sooner in some applications than manufacturers' specifications would suggest to buyers.

Most LED lighting systems last much longer in many applications compared to traditional light sources. However, all LED systems are not created equal, and some solid-state lighting (SSL) users may find the LED products they selected failing much faster than the life values claimed on the datasheet. This shortened lifetime can hurt user confidence. LED system failure can be catastrophic (no light emitted by the product) or parametric (there is light but much less compared to its designed value). An LED system has many components, as shown in Fig. 1, and the failure of any component can lead to system failure. Present industry practice, however, tests the LED device and considers lumen depreciation time (i.e., parametric failure) to 70% as the life of an LED system (see a related article on test standards from this issue). Because the industry standard calls for testing only one component in the system and considers only one type of failure for rating LED system life, the manufacturer-reported product life may be much longer than what a consumer might get when using the product in some applications. Let's consider a research study that illustrates the problem and contemplates potential changes in practices.

Since 2009, the Lighting Research Center (LRC) at Rensselaer Polytechnic Institute has been investigating LED system life to develop a short-duration, predictive life-test procedure that can provide more realistic values for the product lifetime when used in an application if the operating temperature and the use pattern for switching the lighting system on and off are known. Early studies funded by the Alliance for Solid-State Illumination Systems and Technologies (ASSIST) found that time to failure was affected by delta temperature, or the temperature change during the on/off cycle, and dwell time, or the duration in which the system is operating at maximum steady-state temperature (Fig. 2). In 2014, the Bonneville Power Administration and the New York State Energy Research and Development Authority (NYSERDA) provided co-funding to expand the earlier studies. In this study, three types of LED systems - LED A-lamps, LED MR16 lamps, and LED downlights - purchased from the commercial marketplace were tested. All the products sampled were procured during the latter part of 2014. A total of 277 LED products were tested in this study. Fig. 3 depicts the testing laboratory.

For the LED A-lamps tested, both catastrophic and parametric failures exist. Contrary to common belief, on/off switching can reduce LED system life. On/off switching encourages catastrophic failure, which results from thermal stresses introduced into the system by the temperature change caused by power cycling and the thermal-expansion coefficient mismatch between adjacent components. This leads to fatigue failure of interface materials such as the solder attaching the LED to the electronic board and/or the components within the driver. See Fig. 4 for a graph illustrating the results.

Maximum operating temperature, meanwhile, influences the lumen depreciation rate and the parametric failure time because of the optical transmission reduction of the binding materials that hold phosphor particles in an LED package; such failures become rapid at higher temperatures. In addition, high operating temperature can degrade components in the driver that affect the driver output current that flows through the LEDs, causing lumen depreciation and thus parametric failure. An analysis of the failed samples showed that for the LED A-lamps tested, the majority of the failures were due to failure of the solder between the LED and the electronic board, and a smaller portion were due to driver failure. For the A-lamps tested, catastrophic failure times were shorter than parametric failure times.

It is worth pointing out that some LED systems employ feedback control circuits to detect LED temperature and underdrive the devices so they do not exceed certain temperatures that would lead to system failure. Such systems will emit lower light output at higher temperatures, a tradeoff to prevent the systems from failing. In such cases, parametric failure (i.e., reduced light output) may be the only failure mode present.

There could be other systems that employ feedback control that change LED current to maintain constant light output. In such cases, a power increase may need to be considered for parametric failure instead of lumen depreciation. It is safe to say that the majority of the LED lighting systems in the marketplace do not employ feedback control because such features tend to increase product price.

Overall, the study results showed that to obtain more accurate LED system life estimates, new testing practices must include whole-system testing and on/off switching. When reporting system life, the shorter of the two failure modes (catastrophic or parametric) should be considered as the product lifetime because in applications, LED systems can experience both types of failure and depending on conditions, one type could dominate.

The study results provide encouragement that a test procedure can be developed to accurately predict LED system life in any application if the operating temperature and typical on/off pattern are known. By testing the whole LED system and including power cycling with sufficient dwell time, and by considering both catastrophic and parametric failures, an accurate prediction of LED system life can be made within a 3000-hour testing period.

Using the data gathered in the LRC research, an LED A-lamp tested was estimated to last nearly nine years in a table lamp when used for three hours daily, and only two years in a non-IC (insulation contact) recessed downlight when used two hours daily. All of these projections are much shorter than the rated life of the LED product, which is over 22 years when used for three hours daily. The incorrect expectation set by the documented product data specifications is caused by the present industry guidelines for testing and reporting lifetime data for LED products. Therefore, there is an urgent need for the industry test standards to be revised to better guide product manufacturers and consumers.