Over the course of 20 conferences, the Strategies in Light program has seen its share of changes. With his unique insight into the historic market research, conference co-chair Bob Steele draws patterns between the evolution of LED markets and the ways they have shaped the content of the event. 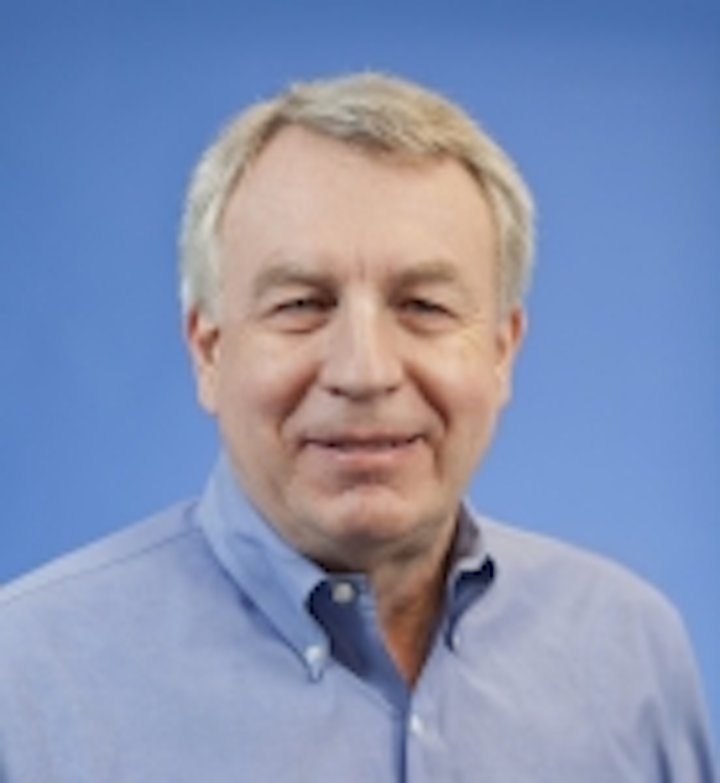 Over the course of 20 conferences, the Strategies in Light program has seen its share of changes. With his unique insight into the historic market research, conference co-chair BOB STEELE draws patterns between the evolution of LED markets and the ways they have shaped the content of the event.

Strategies in Light 2019 will be held from Feb. 27–Mar. 1 at the Mandalay Bay Hotel in Las Vegas, NV. This will mark the 20th anniversary of the conference since it debuted in Burlingame, CA in February 2000. Until that time, there were no conferences that addressed the markets, applications, and technology involving LEDs. However, there was clearly a need for such a conference; the first gathering attracted 250 attendees from both the supply side and the end-user side of the LED industry. In that first year, there was only a single track and no exhibitors. Since then, both the conference and the industry it serves have changed in remarkable ways.

By 2000, the LED industry had experienced astounding growth (61% per year from 1995–1999), following the development of high-brightness red-orange-yellow InGaAlP (indium gallium aluminum phosphide) LEDs in the early 1990s, and high-brightness blue and green InGaN (indium gallium nitride) LEDs in the mid-1990s. (Note: This article focuses on HB LEDs — that is, only those based on InGaN and InGaAlP, and not legacy LEDs based on GaP, GaAsP [gallium arsenide phosphide], and AlGaAs).

In 1999, the year preceding the first Strategies in Light, the worldwide market for HB LEDs was $820M (million). In 2018, the market is estimated by Strategies Unlimited research director Philip Smallwood to be $15.8B (billion), greater by nearly a factor of 20. That information is derived from the market research firm’s annual global LED market review and forecast, which Smallwood will present during the Plenary session at the 2019 conference. The growth in the LED market in the 1999–2018 period has been driven by rapidly decreasing prices accompanied by dramatically increased performance, measured in terms of luminous efficacy (lm/W). Moreover, innovations in various applications, such as backlights for mobile and stationary LED displays, exterior and interior automotive lighting, and general lighting, have helped to drive market growth. 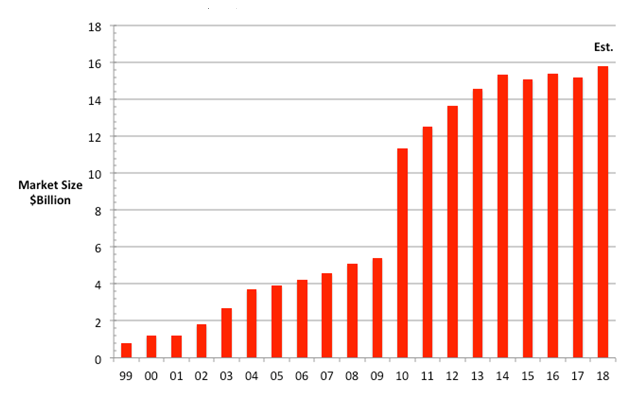 This graph shows historical changes in the LED market ($B) over the period from 1999–2018, demonstrating the slow early growth and rapid increase in revenues from 2010–2018 as the general lighting application began to dominate the demand for LEDs. (Image credit: Strategies Unlimited.)

In 2000, outdoor single-color and multicolor signs and automotive lighting represented the largest application segments for HB LEDs. Lighting was hardly a factor in the market, although some companies had begun making significant inroads into the architectural lighting market with color-changing technology (Color Kinetics being the prime example).

In the early to mid-2000s, mobile phone display and keypad backlights were the main market drivers, resulting in the growth of the LED market to $4.2B by 2006. As the mobile phone market began to saturate, the next stage of LED market evolution was backlighting for LCD displays used in monitors and TVs. The adoption of LEDs in this application was so successful and rapid that the market grew by 108% — from $5.4B to $ 11.3B — in one year, 2009–2010. Due to the high level of penetration of LED backlights in LCD screens and the rapidly decreasing prices of LEDs, this market began to saturate from 2011–2012.

“In 2018, the conference attracted
over 5000 attendees
(including exhibit-only)
and the accompanying trade show
featured over 200 exhibitors.”
— Bob Steele

In 2009, the adoption of white LEDs in the general lighting market began in earnest. At LightFair 2009, nearly every booth showed some kind of lighting product that incorporated white LEDs — a quantum leap from LightFair 2008, when very few exhibitors showed such products. As predicted by “Haitz’s Law,” phosphor-converted white LEDs had finally achieved the price and performance levels that made them desirable as light sources for luminaires and lamps relative to legacy illumination products that relied on incandescent, fluorescent, and halogen sources. In particular, the high luminous efficacy (100+ lm/W) and long lifetimes of white LEDs allowed the higher prices of LED lighting products relative to legacy products to be paid back in 2–3 years by way of lower electricity costs and maintenance savings. 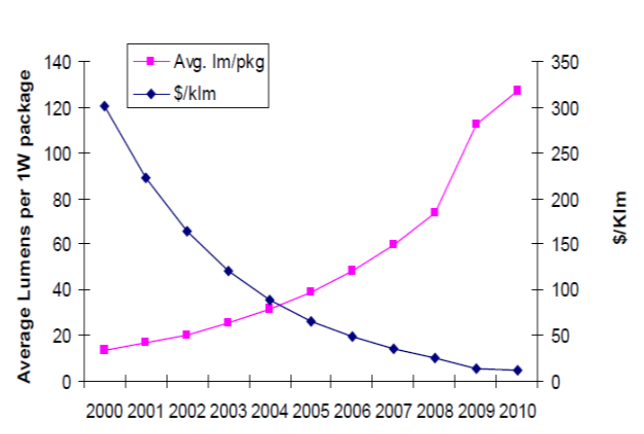 We can follow the evolution of 1W white LEDs over the period from 2000–2010, noting that while average lumens per package or device (lm/pkg) have risen, showing improved performance, the dollars per kilolumen ($/klm) costs have decreased significantly. (Image credit: Strategies Unlimited.)

In 2010, the market for LEDs in general lighting began to take off and it soon became the largest market segment. Other applications — automotive, outdoor signs, mobile phones, and LCD display backlights — remain important. However, lighting has become the dominant application, accounting for $5.4B in revenue — 35% of the LED market — in 2017.

Just as the market for LEDs has developed over the past 20 years, so has Strategies in Light. The single-track format in the early days of the conference evolved into two tracks — HB LED Markets and LED Lighting — in 2010. A third track focused on manufacturing was later added. In 2015, The LED Show became co-located with Strategies in Light to extend the supply chain focus. By that time, as the lighting market had become increasingly dominant, the structure of the conference changed completely, with the entire agenda devoted to lighting in four parallel tracks: Technology, Market and Applications, Connected Lighting, and The LED Show.

For Strategies in Light 2019, the format has changed once again — still with four tracks, but with The LED Show content absorbed completely and no longer structured as a separate event within the conference. These four tracks are:

In addition, and as always, informative interactive SSL workshops and the Investor Forum will take place on the day preceding the main conference sessions. An accompanying trade show will complete the conference activities, with over 200 companies expected to exhibit.

Although Strategies in Light has evolved and changed in many ways over the past 20 years, the emphasis has always been to provide an excellent program that stands out in the industry. The event continues to attract high-level, knowledgeable speakers from the LED and lighting industries, as well as high-quality exhibitors throughout the LED lighting supply chain. It is the goal of the conference team to maintain this high level of quality for the next 20 years, and to continue tracking and recognizing the LED market forces that drive the business we represent.

BOB STEELEis conference co-chair for Strategies in Light and an industry veteran. Steele will lead off the Keynote session on Feb. 28 with an extended insider’s view of these LED industry dynamics in terms of market growth, application evolution, and supplier shares. Explore registration options and join us in Las Vegas.