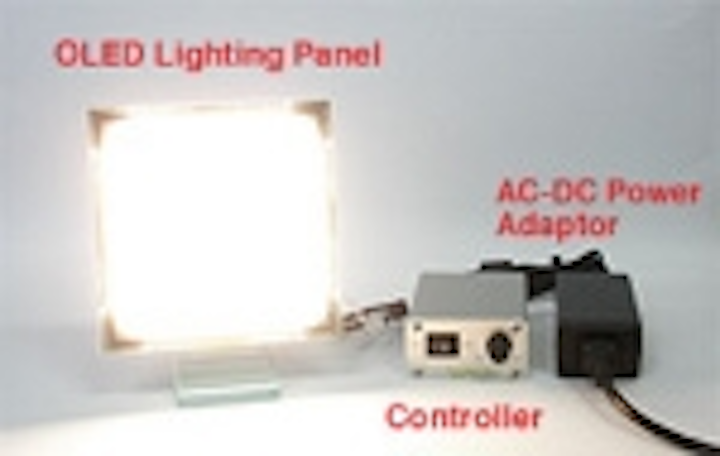 The march toward commercialization of OLED (Organic LED) technology for general-purpose lighting continues with Lumiotec formalizing its market plans. Production is slated for 2013, but the company plans to begin selling a development kit February 15.

OLEDs hold a lot of promise for lighting. Potentially they offer the same long-life, and low-power characteristics that have brought success to LEDs in some lighting applications. Plus OLEDs are fabricated in panels and inherently produce a diffused light across the surface of the OLED panel. But OLEDs trail high-brightness LEDs in terms of maturity in the manufacturing process.

Lumiotec will soon become one of several companies selling OLED development kits. The kit will include a 145×145-mm OLED lighting panel, along with a controller and an AC/DC power supply. The kit will be sold for ¥80,000 (about $890) plus a 5% sales tax. Lumiotec will accept inquiries for the kit on its web site beginning Feb 15.

The January/February issue of LEDs Magazine has a "Focus on OLEDs with more information on OLED developments. Moreover in this article from June 2009, DisplaySearch projects that OLED lighting will take off in 2011. And for those interested in kits, Philips offers an OLED-based Lumiblade kit.