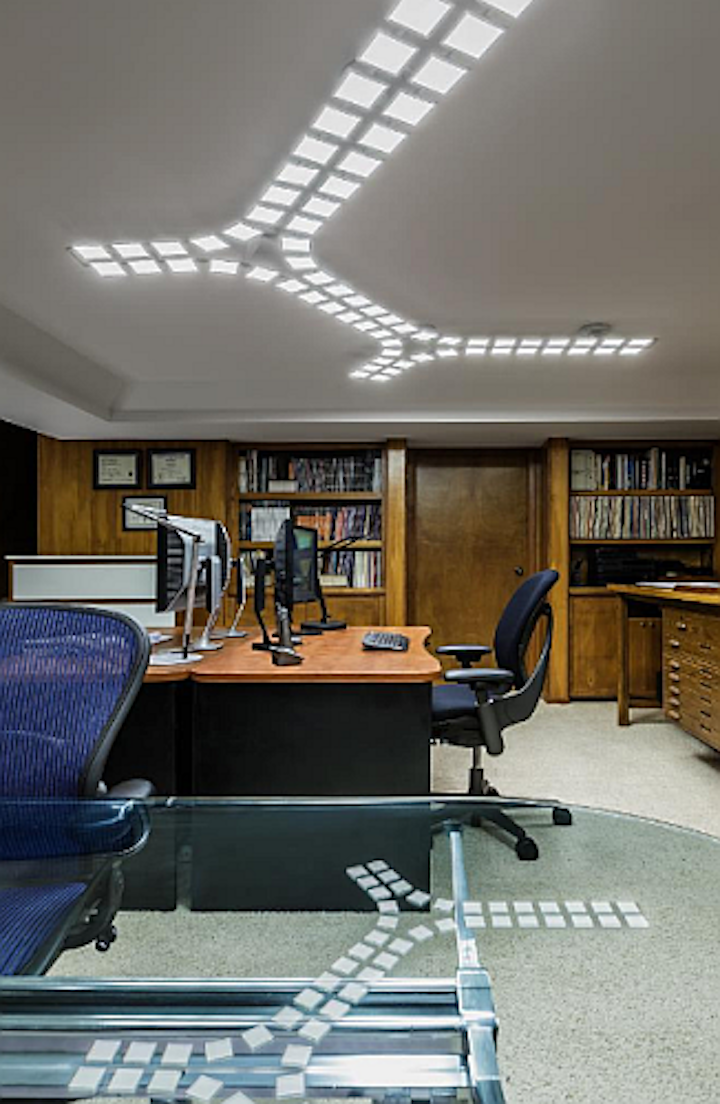 The US Department of Energy (DOE) has released another of its Gateway reports on solid-state lighting (SSL) demonstrations and OLED lighting is the focus of the new research. The report covers the installation of Acuity Trilia OLED fixtures in the office area of Aurora Lighting Design. Generally the OLED lighting has been judged as pleasant although light levels are perhaps too high while efficacy is too low, and when dimmed, the trial installation does produce photometric flicker.

The DOE uses its Gateway program to test SSL technology including LED- and OLED-based lighting in real-world applications. There have been numerous Gateway installations in outdoor and indoor settings. Indoors, for example, the DOE tested wall-wash lighting in a performing arts center last year. 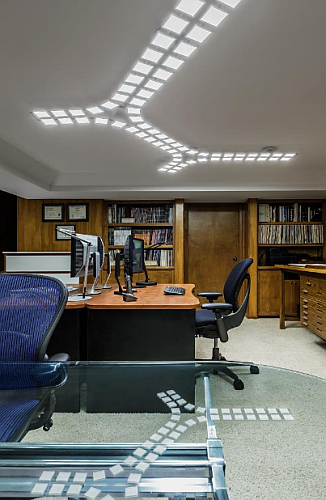 The OLED Gateway project enabled the DOE to study the technology in a typical office environment. OLED panels offer inherently diffuse light and are generally considered to be pleasing to the eye. But while OLEDs are more efficient than legacy sources, the technology does trail LED-based lighting in terms of efficacy and OLED cost remains much higher. We covered much of this ground in a feature article two years back and little has changed in terms of the performance and price gaps.

Aurora Lighting Design is a small consultancy with an office used by four workers. The lighting is installed on a 7-ft, 5-in. ceiling in an area that is recessed over the workspace. The low profiles of the OLED luminaires were a good match for the project although, as we will discuss in detail, driver installation was problematic.

The room, measuring over 14×29 ft, is lit with a total of 120 4×4-in. OLED panels integrated in three straight sections of eight panels each and four triangular sections that use 24 panels each. The lighting designers at Aurora participated in the design and developed a photometric plan for the installation that would deliver more than 30 fc at the 2.5-ft-high task plane.

While mounting the luminaires is relatively straightforward, the overall installation was more problematic and complicated by the fact that the contractor doing the work had no experience with OLED technology. The installation required that eleven drivers be installed in a separate storage space and 41 wires had to be fished through the ceiling with three wires connecting to each straight section and eight wires to each triangular section.

The realized system performance is relatively good for an SSL project. Initially, two of the eleven drivers supplied by Acuity were mistakenly higher-power models than specified, resulting in higher-than-expected light levels in some areas and higher-than-expected power consumption. Subsequently, Acuity sent replacement drivers. Now the system uses 189W, delivers a power density of 0.62W/ft2, and produces 8518 lm at 100%. The project-level 45-lm/W efficacy certainly is lower than what could be achieved with the latest LED-based products.

The OLED luminaires replaced a prior lighting scheme that used LED-based PAR38 lamps in eight downlights. That 156W system delivered 8400 lm. But the OLED system delivers far better uniformity and 89 CRI. Before the LED-based lamps had been installed, eight compact fluorescent lamps (CFLs) had delivered 10,400 lm from 208W.

Indeed, the workers generally believe that the light levels are too high when set to 100%. A 0–10V dimming system enables control. Even at night when no natural light enters the windows, the workers use the lighting at 50–80% of full output.

The project has revealed that the OLED panels flicker when dimmed. The DOE measured photometric flicker in the range of 77% to 100% over the typical dimming range used in the office. But that flicker is at 261 Hz and above the range at which it would impact most humans.

The major negative aspects of the project are seemingly all related to the drivers and the DOE lamented that the lack of a driver designed specifically for the OLED panels hampered the success of the project. Today specifiers working with OLEDs generally use drivers optimized for LEDs. In the case of the Gateway project, such drivers were said to have limited efficacy and were inevitably linked to the measured flicker. Plus the bulky drivers could not be mounted with the luminaires.

You can read the full OLED report on the DOE website. Moreover, the OLED project was one of several presentations that the DOE hosted in its booth at LightFair International this past week. Those presentations have all been posted for download.