Two desk lamps make the best of LED and OLED technology, respectively, although their price range is probably out of the reach of most consumers, writes TIM WHITAKER. 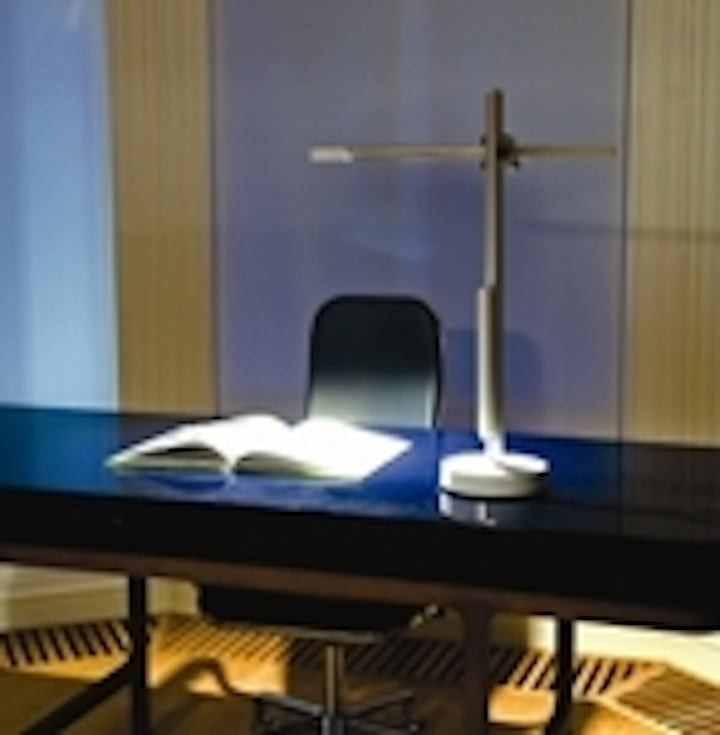 LED desk lamps and reading lights are easy to find in many retail outlets, but few are built with quality and longevity in mind. Even fewer contain heat-pipe technology to cool the LEDs, and in this respect the CSYS desk lamp (Fig. 1) from UK-based Jake Dyson Products is probably unique. Meanwhile, Germany-based OLED manufacturer Novaled is targeting the luxury market with the Victory desk lamp (Fig. 2), which incorporates four OLED panels in a carbon-fiber frame. LEDs and heat pipes

Design company Jake Dyson Products has engineered an LED-based desk light – the CSYS – that uses heat-pipe technology to maintain an LED junction temperature of just 30°C above ambient. The LEDs are mounted at the end of a thin, horizontal arm, with the heat-pipe positioned inside the arm to draw heat away from the LEDs themselves, maintaining the low junction temperature. The heat sink is therefore incorporated as a structural element, and its entire surface area is used to dissipate heat.

“There is a discernible lack of reliability and innovation in existing LED desk lights,” said designer Jake Dyson. “Current issues in this area include: poor heat management; weak light distribution; light color erosion; and a lack of comfortable, warm-white color.” Dyson believe that such issues are making consumers and industry alike cautious about committing to LED technology in lighting. However, he says: “We have managed to address all of these problems and believe that the CSYS will truly change people’s minds about LED lighting.”

The heat pipe comprises a sealed copper pipe, which is evacuated. A small amount of water is placed inside, and when one end of the tube is heated, the water evaporates and moves to the cooler end of the tube. The water condenses and moves back to the hotter end by a capillary process, setting up a continuous cycle which (in this case) moves heat away from the LEDs.

Because of the focus on thermal management, which involved 18 months of R&D to optimize the heat-pipe technology for this application, the company is claiming a lifetime for the product in excess of 37 years. This is based on 12 hours of use per day, and a projected L70/B50 lifetime (see page 51) of 160,000 hours at a junction temperature of 60°C. Jake Dyson Products says that the lifetime data is provided by the LED maker.

The desk lamp also has a unique positioning mechanism to orientate the light through three axes. A CSYS is the system of coordinates that defines an object’s position in x, y and z axes. The spread and the intensity of light can be controlled onto the working area, and its optical design minimizes glare, says the manufacturer, because the LEDs are set back into the head of the horizontal arm. Another feature of the luminaire is touch-sensitive dimming. Of course, this all comes at a high price, namely GBP 550 ($860) retail.

Noting that the UK government is promoting CFLs as an energy-efficient lamp technology, Jake Dyson Products lists four advantages of LEDs versus CFL alternatives. These include the cost saving associated with the lack of need to replace the LED light source; the absence of mercury; the directionality of illumination and good color rendering; and the slim and compact design of the LED lamp, which is difficult to achieve with CFLs.

Although the Jake Dyson product is highly engineered, the Victory desk lamp from Liternity is in a different class, with a price tag to match of $7500. Liternity is the brand name for a new range of luxury, limited-edition OLED luminaires launched recently by Novaled AG, the Germany-based OLED manufacturer. The Victory desk lamp is described as “the world’s first luminaire to showcase OLED lighting in an ultra-thin, ultra-strong, carbon-fiber base.” The Victory desk lamp is 35 cm high and 40 cm deep, and its “V for victory” design includes two arms with embedded ultra-flat OLEDs that provide “pleasant, diffuse light over the entire surface,” says the company.

The lamp contains four OLED panels, each with an active area of 41 cm2. The color temperature is 3200K and the lifetime is quoted as 10,000 hr. The power consumption for the whole luminaire is 16W. The operating brightness is 3000 cd/m2 and the illuminance at the desk level is 400 lux.

Gerd Guenther, chief marketing officer at Novaled, said, “OLEDs redefine our understanding of light, due to their extraordinary characteristics. They enable imaginative designs and applications that simply could not have been created with existing lighting to date, and even offer the potential for transparent and bendable light sources in the future. [The] Liternity brand [is] providing outstanding warm-white light that equals the quality of daylight, in a form factor as unique as a human fingerprint.”