Companies that are developing LED lighting products need to have an awareness of the wider patent landscape to help them develop, protect and exploit their own intellectual property to its fullest, as JACKIE MAGUIRE and DAVID SEGAL explain. 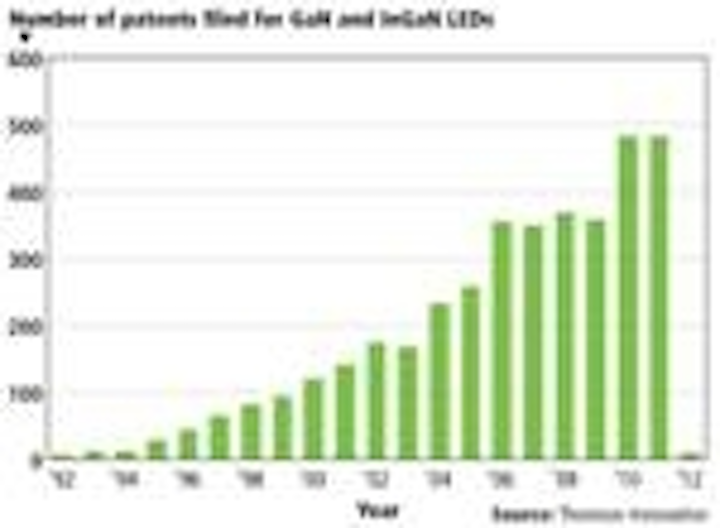 The field of LEDs is an extremely exciting one for anyone with a flair for invention. Rapid technological change in this market has led to huge breakthroughs, and the potential seems unlimited. In business, however, opportunity normally walks hand in hand with threat, and this is true in the LED market. Successful players in the solid-state lighting (SSL) space must be aware of the competitive intellectual property (IP) landscape and be prepared to protect their proprietary technology.

As a technology extends from the stage of basic research through to product development and commercial success, there is always the potential for litigation for the developer including patent infringement. The latter is a complex and potentially costly area for defendants. For example, the commercial success of mobile phone technology and social media networks has spawned an array of litigation cases brought about either by competitors or by so-called non-practicing entities (NPEs) and licensing companies. These are organizations that own patents but do not manufacture products based on them, and that base their business model on obtaining income through licensing their IP – namely their patent holdings. NPEs are sometimes referred to as “patent trolls” although when used in this way the phrase has derogatory overtones and their modus operandi is not necessarily predatory.

It is vital that individual inventors and organizations ensure that they have full control over their IP – even if they decide to exclusively licence or sell it – and understand the threats from third-party IP. Most businesses and inventors are aware that they need to have some kind of IP protection. However, there is a risk, if protection in every jurisdiction in which they are planning to operate is not obtained right from the start, that they could be leaving themselves open to challenges from competitors. A good IP strategy involves understanding exactly what intangible assets both you and your competitors have and their value, and also how to commercialize as well as protect them. We will focus first on protection.

Obtaining protection through a granted patent is just one way to protect inventions and ideas. Having patents for your innovative developments and inventions gives you rights to stop others from making, selling, licensing, distributing or otherwise profiting from your invention for a limited period of time in exchange for a public disclosure of that invention.

When it comes to patents, novelty is key and so it is important to know if someone else has also developed something close to your invention which would prevent it from being claimed as novel. Before starting your patent application, you should therefore undertake a search for patents that have been published around the world in your area of technology/invention. It can be quite complex to submit a patent that stands a good chance of being granted and if a company has any doubts over novelty it is best to consult an IP specialist who can help with this.

Organizations sometimes forget the need to ensure that nothing is publicly disclosed before full protection is in place. It is critical that companies do not inadvertently make a public disclosure – for example, at a conference, in a research paper or article, or perhaps in a standards meeting. If a disclosure is made – and if a patent application has not already been filed – then from that point onwards the invention may not be deemed novel or inventive, and it will be difficult to obtain a commercially valuable patent. In such a case, a business runs the risk of giving away its ideas or inventions for free.

When it comes to lighting, although incandescent light bulbs and fluorescent tubes are widely-known to generations of people, LED lighting is a newer technology now spreading out across the public arena.

The advance of LED lighting is a reflection of successful interdisciplinary activities involving chemistry, materials science, engineering and physics in both basic and applied research and ultimately commercial exploitation. These disciplines are crucial to the development of features of inventions that are described in the international patent literature, including inventions in healthcare, power generation, transport, and smartphones.

LED developments may therefore incorporate inventions originally intended for alternative applications. For example, LEDs are amenable to processing by established techniques used in the semiconductor industry. Of interest here are both inorganic LEDs, such as gallium nitride (GaN)-based devices, and organic light emitting diodes (OLEDs), which are conjugated polymeric molecules. Inventions in the patent literature also relate specifically to LED lighting.

In this article we address some IP issues associated with the growing areas of LED-based SSL with attention focused on aspects of the wider patent landscape.

Anyone with interests in LED lighting will want to know answers to one or more of the following questions:

It is possible for an organization or individual to search the publicly available information in national patent offices. It is however a time consuming process and commercially-available software is available via professional organizations that simplifies and accelerates the searching process for these databases. If an organization is trading, or planning to trade, internationally, the issue of protecting intellectual assets across the globe can be quite intricate. Each country has different processes and methods, and the pitfalls in obtaining IP protection in each country also vary, which means that professional interpretation is necessary.

In Europe, a system operates to provide a method of protection across the EU states, thereby making it more streamlined to obtain patent protection. In the EU, different trade restraints apply, and it is especially important to consider competition law – which covers the free movement of goods around the EU and the avoidance of the abuse of a dominant position in the market – when planning your IP strategy.

Because patent protection overseas can be complex, we recommend taking advice at an early stage to ensure pitfalls are avoided, opportunities maximized and costs are kept to a minimum. It can be time-consuming and costly to sort out errors later. In addition, patent portfolios need to be reviewed on a regular basis to ensure that as organizations and legislation change, full protection remains in place.

Patent searches on LED lighting based on representative inorganic materials, namely GaN and Indium GaN (InGaN), show approximately 3800 patent families that have been filed over the past 20 years. A breakdown of the published patent filing dates shows that the LED lighting area based on GaN is one of expanding activity (Fig. 1).

A primary source of patent infringement cases in the US Federal District Courts in the USA is the Justia website (www.justia.com). This can be freely accessed, and we recommend continual review of this site to keep up-to-date with lawsuits in LED technology.

To illustrate the IP landscape, we will highlight three recent cases involving LED technology. The cases show the complexity and breadth of IP claims and how some patents become cornerstones of subsequent IP claims.

Everlight and Emcore vs. Nichia

In this case, Everlight is seeking enforcement of a patent US 6,653,215 (contact to n-GaN with Au termination, filed in October 2001, granted in November 2003 and assigned to Emcore). This patent relates to metallization technology and illustrates, when compared to the case between Philips and Nexxus Lighting, how infringement cases in a general area of technology – here LED lighting – can involve patents that describe a wide range of different features of the technology.

Everlight is also asking the US court to declare that two Nichia patents are invalid: US 5,998,925, which was filed in July 1997 and granted in December 1999, and US 7,531,960, which was filed in March 2007 and granted in May 2009. These two patents relate to the use of phosphors in producing white light in LEDs. For a recent update to the Everlight vs. Nichia case, see www.ledsmagazine.com/news/9/6/18.

We also find it useful to identify which patents have been highly cited when considering a set of documents pertaining to a field of technology, since documents that are highly cited (i.e. referenced by later documents) may represent critical technology. One of Nichia’s patents that Everlight is attacking (US 5,998,925) is a highly cited document with about 500 citations, and has been extensively cited by GE, Cree, Nichia, Osram and Toshiba (See the online version of this article for an illustration of theses citations).

Lektron produces a modular Leon-simulated neon lighting product described by US patent no. 6,361,186, which was filed in August 2000 and granted in March 2002. In this case, US 6,361,186 is asserted against Philips in relation to a product offering from that company. This case illustrates that a discrete product can be subject to infringement action in the LED field in addition to common technologies such as metallization, phosphors and electronic circuitry.

Lektron produces a modular Leon-simulated neon lighting product described by US patent no. 6,361,186, which was filed in August 2000 and granted in March 2002. In this case, US 6,361,186 is asserted against Philips in relation to a product offering from that company. This case illustrates that a discrete product can be subject to infringement action in the LED field in addition to common technologies such as metallization, phosphors and electronic circuitry.