More than 7700 metal halide fixtures will be converted to LED technology at the Minneapolis St. Paul International Airport and the facility will add a 3-MW solar plant on the top deck of two parking structures. 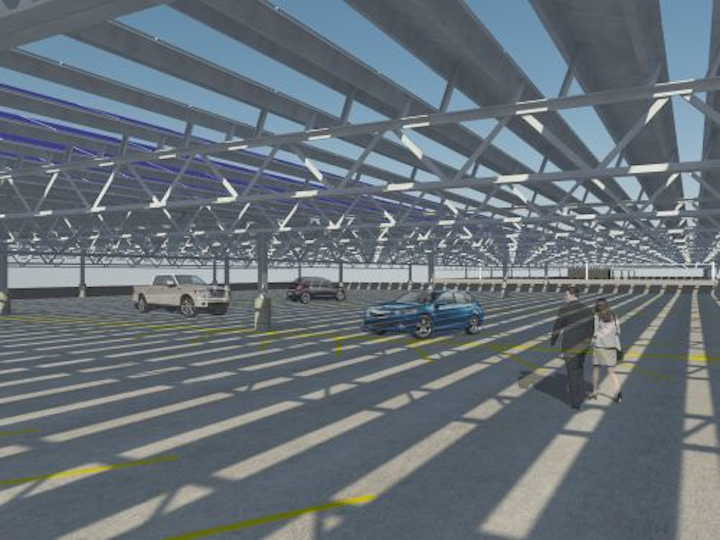 More than 7700 metal halide fixtures will be converted to LED technology at the Minneapolis St. Paul International Airport and the facility will add a 3-MW solar plant on the top deck of two parking structures.

The Metropolitan Airports Commission operates seven airports in the Minnesota Twin Cities area of Minneapolis-St. Paul, and has begun a massive energy-efficiency project including LED lighting at the flagship Minneapolis St. Paul International Airport (MSP). Construction was begun this past week on what the agency said is Minnesota's largest solar generation project — a 3-MW (megawatt) plant located atop two parking structures. Moreover, the project will include retrofit of more than 7700 metal-halide fixtures to solid-state lighting (SSL) products. 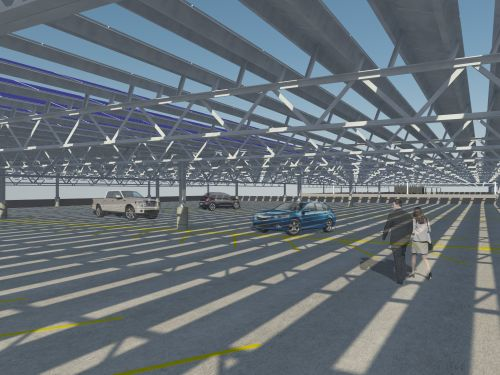 Rendering of the solar array atop Terminal 1's parking ramp.

"The Metropolitan Airports Commission has worked for decades to operate Minneapolis-St. Paul International Airport as sustainably as possible, investing millions in infrastructure to reduce impacts to soil, water, and air quality, and spending nearly a half-billion dollars on noise mitigation around MSP," said Jeff Hamiel, the Commission's executive director and CEO. "This ambitious new solar energy project will create jobs, reduce the airport’s carbon footprint and save the Airports Commission hundreds of thousands of dollars a year. I want to thank all the public and private entities who have worked with us to make this project possible."

We've recently seen an uptick in projects that combine LED and solar technology. Indeed, we covered a presentation at the February Strategies in Light conference that made the point that energy-efficient LED lighting was making solar generation more viable despite the inherently low efficiency in solar panels.

The project goes beyond lighting to address many angles in energy efficiency. For example, the airport will add 18 charging stations for electric vehicles. Moreover, the airport expects the solar plant to deliver 20% of the airport's energy needs.

Minnesota Governor Mark Dayton pegged the cost of the project at $25.4 million and said the project is evidence of the state's proactive energy efforts in the Minnesota Clean Energy Economy Profile. The profile both documents the state's energy-efficiency efforts to data and identifies opportunities for additional clean energy projects.

"This project will create 250 new jobs, and make our airport one of the most energy-efficient in the world," said Governor Dayton, who enacted a new solar energy standard requiring utilities to produce 1.5% of their electricity from solar power by 2020. "Minnesota’s nation-leading clean energy policies, and projects like this one, have significantly reduced carbon emissions in our state while helping create thousands of new jobs. Today’s announcement offers more proof that clean energy progress and job creation are complementary objectives."

The energy services company (ESCO) Ameresco has been selected to lead the project. Moreover, a number of Minnesota-based organizations will participate including tenKsolar, Thrivent Financial, and Hunt Electric. Apparently Cooper Lighting will supply the SSL fixtures as they were the only lighting company listed as a participant in the project. Utility Xcel Energy is contributing a $2 million grant to the project from their Renewable Development Fund.

"Today, we celebrate a proving ground for renewable innovation in the state of Minnesota — the largest solar site in the state to date," said George Sakellaris, president and CEO of Ameresco. "Ameresco is honored to be a sustainability partner in this innovative project. We applaud the Minneapolis-St. Paul International Airport and its management for its stewardship both in pursuing renewable energy solutions for the airport as well as obtaining public-private financing to support the construction. Ameresco takes pride in contributing to local job creation as part of achieving energy savings and sustainability."