The new crystal ball, which can produce millions of vibrant colors and billions of patterns, will also be tough enough to withstand New York weather in its new permanent installation. 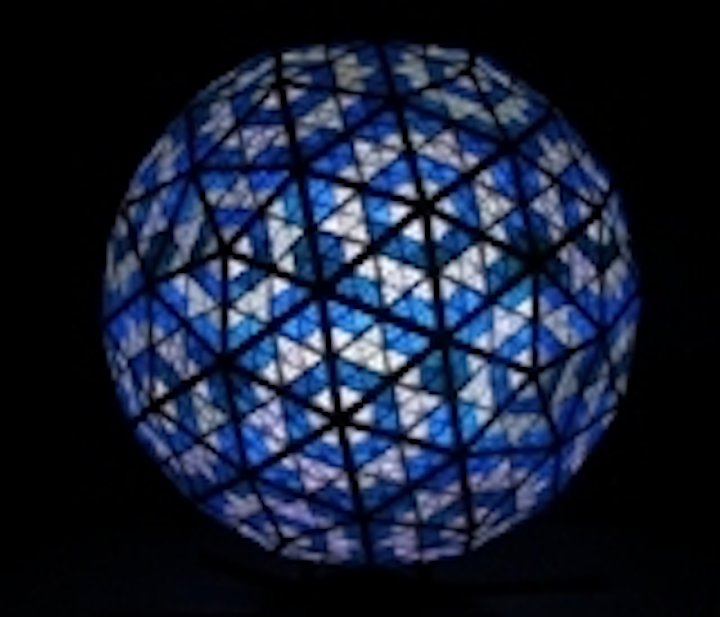 Covered in 2,668 triangular Waterford Crystals and powered by 32,256 Philips Luxeon Rebel LEDs, the newly retrofitted Times Square New Year’s Eve Ball will be capable of creating a palette of more than 16 million colors and billions of patterns atop One Times Square.

Permanently glittering over Times Square
The co-organizers of New Year’s Eve in Times Square, Times Square Alliance and Countdown Entertainment, have announced that in January the new ball will become a year-round attraction above Times Square and will be lit up in patterns to commemorate holidays and other events.

Thus, the 12-foot, 12,000-lb geodesic sphere not only has to be beautiful but also hardy. The ball had to be designed to withstand year-round wind and hot summer days.

Lighting Science Group, which designed, developed, and produced an integrated lighting system for this year’s and last year’s ball, tackled the weather obstacle. Extensive electrical, mechanical, thermal, and environmental tests were performed on the system’s 672 LED modules, power systems, and power and data distribution networks to assure long-term performance through all kinds of weather.

“We had a proven LED module design [from last year’s ball] that we were able to modify in the time frame for the increased weatherproof-ness because it’s becoming a permanent installation. It had to be ready for whatever the New York environment could throw at it,” said John Burne, special projects lighting manager with LSG.

An integrated thermal management system was installed to, among other things, help cool the ball during the baking heat of the NY summer. Every LED board has substantial heat sinking on the rear with active thermal management. Thermal sensors inside the bulb that communicate back to the media server can dim the bulb as temperatures rise. Blowers inside the bulb can also evacuate the hot air, if necessary.

In addition, LSG created custom optical reflectors that extract maximum light output and enhance the beauty of the Waterford Crystal by increasing the number of refractions that come off the crystal. LSG also helped to design a mounting system that held the crystals “surely but still gently” in case of gusty winds.

“Our biggest challenge was scheduling. On this project, we were brought in in late February for an October deadline date. There was truly a hard deadline. We couldn’t miss it,” added Burne.

Another company involved in the ball project was Focus Lighting, which created a spectacular and unique lighting design that utilizes over 3,500 lighting cues to orchestrate the colorful moving patterns of light radiating from the ball. Theatrical techniques were used to show the beauty of each facet of each individual crystal, making the sparkle visible at 500 feet from the streets of Times Square.

Reportedly, this year’s ball is 10-20% more energy efficient than last year’s already energy-efficient ball, consuming only the same amount of energy per hour as it would take to operate two traditional home ovens. It is also designed to operate in excess of 30,000 hours, important if it is a permanent display, compared to previous lighting solutions, which were only expected to last 1000 hours.

“The concept is just so different. It’s more like wrapping a video screen around a sphere – you just can’t do that with bulbs,” said Steve Landau, Director of Marketing Communications for Philips Lumileds.

Interestingly, the numerals making up the display of the new year are still lit by Philips’ halogens because there were no suitable LED retrofits available for this application. But next year the technology may improve and the halogens may be changed as well, said Susan Bloom, Director of Corporate Communications for Philips Lighting. She added that the company has been involved with the Times Square Ball lighting since 1999-2000.

“Over the last nine years, everything from the ball to the numerals that light up are getting more efficient and a little bit brighter. It’s a great opportunity to demonstrate what’s possible,” said Landau. “In addition, energy efficiency is not just for these unique projects. The technological advances will eventually translate to your home, your business – and that’s ultimately what’s most important.”

“From our perspective, it’s a constant reminder of the beauty, power and energy efficiency of LEDs, and what is truly possible with LED lighting,” said Bloom.