An installation in Paris translates vehicle and passenger traffic and mobile phone activity into motion and light. 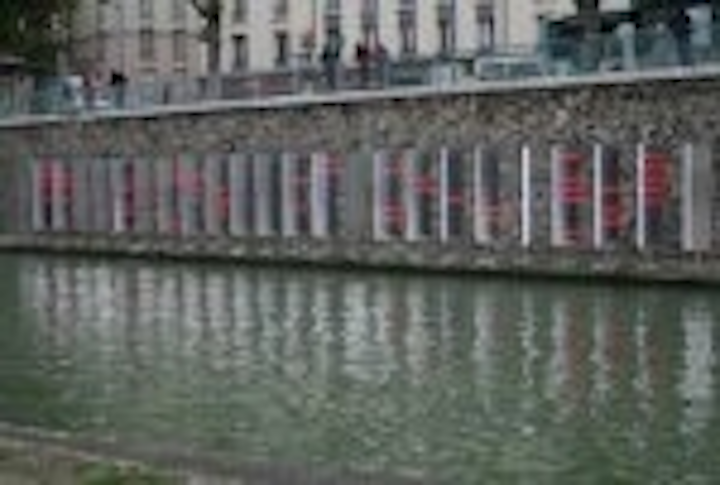 fLUX, binary waves is an urban “cybernetic” installation that measures the flow of passengers and cars, and the use of communications such as the electromagnetic fields produced by mobile phones. These flows are translated into light and movement using a series of LED-illuminated panels.

The installation fLUX, binary waves was conceived and realised by the Belgian artist group LAb[au] and produced by the French art organisation Synesthesie, in the context of the Art Grandeur Nature 2008 biennial.

The installation consists of a network of 32 rotating and luminous panels of 3 meter-high and 60 centimetres wide, placed every 3 meters to form a kinetic wall. The panels rotate around their vertical axis, and have a black reflective surface on one side, the other being plain mat white. Their rotation is controlled by microprocessors, allowing to determine precisely the rotation speed and angle, while their networking allows to synchronise the movement of the 32 panels.

The microprocessors are connected to infrared sensors, capturing the surrounding infrastructural flows, defining the frequency and amplitude of the rotation. According to this set up, each impulse is transmitted from one panel to the other, describing visual waves running from one side of the installation to the other, and then bouncing back while progressively loosing oscillation. All these principles relate the ‘micro-events' happening in the area to a unified play of light, colours and sounds directly derived from the rhythm of the city flows.
Latest in Networks & Controls