Although the energy efficiency of solid-state lighting has been documented, the most efficient way to power the lighting has been the subject of debate. Alec Makdessian and Thong Hunyh describe how Power over Ethernet (PoE) technology brings networking and control advantages to LED lighting systems that AC mains power cannot provide.

Although the energy efficiency of solid-state lighting has been documented, the most efficient way to power the lighting has been the subject of debate. Alec Makdessian and Thong Hunyh describe how Power over Ethernet (PoE) technology brings networking and control advantages to LED lighting systems that AC mains power cannot provide.

LED-based solid-state lighting (SSL) is now a mainstream technology, replacing incandescent, halogen, and compact fluorescent lights (CFLs) in commercial, industrial, and residential use. The benefits of LEDs are well documented and include a longer operational life, higher energy efficiency, and tiny size for small-form-factor fixtures. As an example, the 50,000 hours of operational life for an LED lamp is far longer than the typical 1000 to 2000 hours for incandescent lamps and 5000 to 10,000 hours for CFLs. Given their longer life, LEDs lower the access/safety risks and high labor costs of replacing a hard-to-reach lamp. LEDs also cost much less to operate and the brightness of the light emitted by a 10W LED lamp is roughly equivalent to a 60W incandescent bulb.1

While the benefits of using LED lights are now well understood, the best way to power them efficiently remains debatable. In this article, we explain how DC power can be provided to LEDs by using modern power over Ethernet (PoE) technology. When PoE technology is compared to traditional AC mains power for lighting, system efficiency is comparable. However, the PoE technology wins when you add the advanced benefits of networking the lights using the Ethernet local area network (LAN) and the lower costs of LED maintenance.

LEDs are inherently low-voltage DC devices. To ensure compatibility with traditional AC power, most LED drivers for lighting use an AC-to-DC converter to convert the AC mains power to a lower DC voltage. This conversion process reduces system efficiency, so designers have proposed DC-based power systems. A few studies have compared the costs for the prevalent AC system approach with a DC-powered system. One study by Carnegie Mellon University2 "found: a savings of $2,000 per year using DC instead of AC. If the LEDs were powered with solar PV power augmented with grid electricity, even bigger savings of $5,000 per year could be gained by using DC instead of AC."3

Today, you can provide the DC power to LED lamps with PoE technology, which is regulated by the IEEE 802.3 standard, originally released in 2003 and updated in 2009. This standard specifies that power and communication data be delivered across a single standard network cable (i.e., Cat5) directly to the connected devices. Power is provided via the power-sourcing equipment (PSE) located in the switch/hub. The connected device receiving the power (i.e., the LED lamp in our example) is called a powered device (PD).

Powered by PoE, each LED light fixture can be a standard RJ-45 connector plug-and-play device with its own individually addressable IP address. Moreover, adding sensors to the LED fixture transforms it from a lighting-only fixture to a smart LED hub. With this configuration, each intelligent LED hub can collect information on ambient lighting, temperature, humidity, and anonymous room-occupancy data which it then communicates back to a controller. For example, occupancy sensing can ensure that lighting turns on when someone enters a room and turns off when the room is unoccupied (Fig. 1). Ambient light sensors can also enable daylight harvesting5 and adjust the LED lighting to maintain constant lighting when sunlight is absent. PoE is ideally suited for powering, connecting, and controlling smart LED hubs with a LAN. In this way, the LED lighting system becomes part of the IT network; its reach extends beyond the immediate vicinity of the user and to other building services through any network-connected device (e.g., phone, tablet, PC). Thus, a user can utilize the system's proximity sensors to find the closest available meeting room. An even greater benefit extends to facility owners and managers who now have an integrated view of a facility's energy usage. By measuring, monitoring, and controlling all the nodes of the network (including heat and ventilation) in real time, management can identify opportunities for improved energy usage and operational efficiency. Armed with this information, they can adjust temperature, lighting, and cleaning schedules based on historical user behavior data.

An additional benefit is futureproofing with a PoE LED network. The LED lighting fixtures (and the associated smart sensor hubs) are already positioned where they are needed with the power and data already wired to the most useful locations. So new sensor or communication modules, such as distributed short-range wireless access points, can be added at low-margin cost and with relatively little labor (Fig. 2).

Where does this get us? It is clear that using PoE lowers the cost of deploying and installing IP-enabled devices, whether these devices are sensors or LED lamps. Cabling costs are lower because data and power share the same cable. Installation costs are lower because a licensed electrician is not required to install the network cable. Installation is also safer because the PoE DC voltage is less dangerous than 110 VAC (or 220 VAC). A PoE network enables better overall network power management; it provides both discrete control over the power of the connected devices and backup power during power outages. An example of the added value of PoE technology was Super Bowl© XLVII when a power outage took down the lighting and elevators for 35 minutes.6 Meanwhile, the stadium's Wi-Fi© network was unaffected since it was powered by PoE, which had battery backup.

All these advantages of a PoE-connected lighting system have actually reignited the AC versus DC power debate. Some ask, "What about the ohmic losses that the Cat5 (or better) will introduce?" Others might ask, "Are these losses low enough to achieve appreciable efficiency improvement if you remove the additional stage of AC-to-DC conversion currently required in an AC mains powered system?"

To analyze this controversy, we examine three scenarios for powering a 10W and a 20W LED lamp. The two PoE scenarios will be powered according to the original IEEE802.3af (15.4W PSE and 13.0W PD) and the subsequent IEEE802.3at (30W and 25.5W) standards. The AC scenario is based on the 230-VAC standard mains power.

Since the setup efficiency is affected by the length of the Cat6 cable, we examined three average cable lengths of 25m, 50m, and the maximum allowable 100m for each of the 10W and 20W lamps. Table 2 provides the system efficiency for these individual scenarios.

For the LED driver, we used 95% efficiency in our calculation. The actual efficiency may be even higher, as seen in Fig. 4, which shows the efficiency curves of the MAX16832 LED driver. At 48V, even higher efficiencies are possible.

Referring back to Table 2, the system efficiency varies from 79.7% to 83.9% depending on the cable length and, of course, the power at the lighting fixture. For higher-power LED fixtures, the efficiency can drop significantly. It is therefore more advantageous for efficiency to keep the power per port rather low. This also allows more granular control. Having said that, a 20W (1800-lm) LED lamp is roughly equivalent to a 200W halogen bulb, so it is more than an acceptable task light.

In the tested AC scenario, AC power is delivered directly to the LED fixture, requiring an AC-to-DC conversion as shown in Fig. 5.

In this AC scenario, the power loss due to cabling is minimal. Most of the efficiency losses are due to the AC/DC conversion required in each individual fixture. The MAX16841 is an offline LED driver that includes a constant frequency-control technique that maximizes the conversion efficiency at both the low and high AC lines by operating in the conduction mode. This mode minimizes the total conduction and switching losses. Refer to the MAX 16841EVKIT data sheet (http://bit.ly/1DG zlQ6) where the efficiency with 8 series LEDs is 82.9% with dimming, and 84.8% without dimming. Output power is 10W. 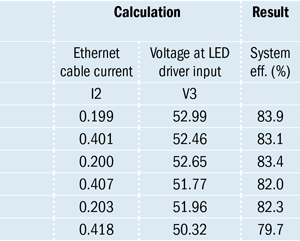 AC versus PoE: The ultimate comparison

Ultimately, the efficiency comparison between a PoE system and AC system will depend on the lighting needs of a specific application. PoE power efficiency will always be better than an AC system if the individual output power is kept low and if the length of the Cat5 or Cat6 cable is short. So actually, the more granular the lighting, the more efficient is the PoE-powered LED compared to AC power.

There is one additional note. Our analysis assumed 23AWG Cat6 cable resistance. The efficiency for PoE lighting can improve even further by using 22AWG Cat6, which is currently not as common but could see widespread use as PoE lighting becomes more common.

Our previous analysis only considered system efficiency. Actual costs were not factored in. The cost of licensed electricians/permits for lamp and system installation will depend on local rules and regulations. Consequently, to truly compare cost differences between AC- and PoE-powered lighting, these labor costs must be included.

Beyond any considerations of cost and efficiency, we must not forget how LED light fixtures powered by PoE can be readily paired with sensors, wireless communication modules, and embedded processors into smart hubs. Connecting smart LED lighting/sensor hubs to the LAN delivers valuable futureproofing by enabling the installed LED hubs to quickly support and take advantage of emerging technologies like the Internet of Things (IoT) without additional, expensive lighting replacement.

ALEC MAKDESSIAN is director of business management and THONG HUNYH is director of applications engineering at Maxim Integrated (maximintegrated.com).

Super Bowl is a registered trademark of the National Football League.

Wi-Fi is a registered certification mark of Wi-Fi Alliance Corporation.