Jealous of your friend’s orange-hued dashboard, when you have only the standard blue? There’s hope. 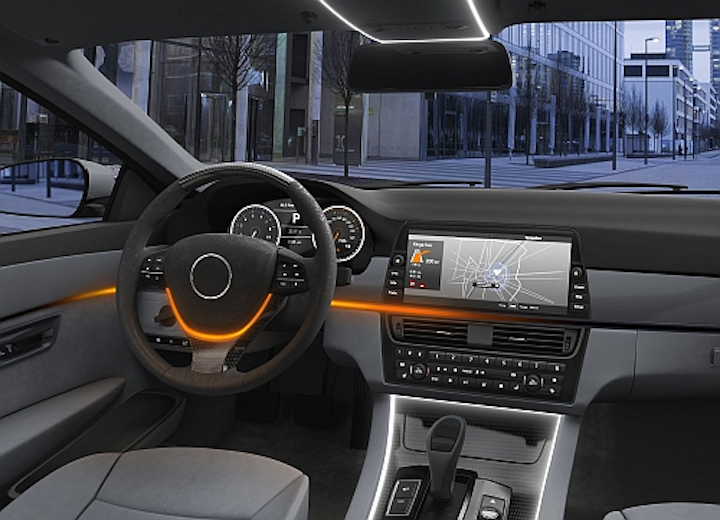 Jealous of your friend’s orange-hued dashboard, when you have only the standard blue? There’s hope.

For some guys, the car is the ultimate “man cave” — an escape, whether parked in a favorite spot or moving. A place to get away from it all. To contemplate. Perhaps do nothing. Maybe eat a sandwich, listen to music, or to the game. Maybe just breathe. Whatever. Some fellas might think that the scruffier the interior, the better.

Now, Osram is doing its best to spruce it up with stylish LED ambience.

The lighting giant from a land where car design really matters — Germany — is developing an LED module using surface-mount (SMT) LEDs that will enable the dashboard and trim to change colors and brightness in a manner that suits moods and creates them.

The prototype Osire E4633i LED module includes three chips — red, green, and blue. It also has a serial control driver from Inova Semiconductors. The announcement of the E4633i comes on the heels of Osram joining the ISELED alliance of companies, which shares technology ideas for interior automotive lighting, and of which Inova was already a member.

“In the future, the interior of vehicles will be more than simply a cabin for the driver and passengers,” said Stephan Pawlik, marketing manager for automotive interior at Osram Opto Semiconductors. “It will be an extension of our living space in which we will be able to work and relax. Light sources in car interiors will provide ambient lighting and perform a number of additional functions.” 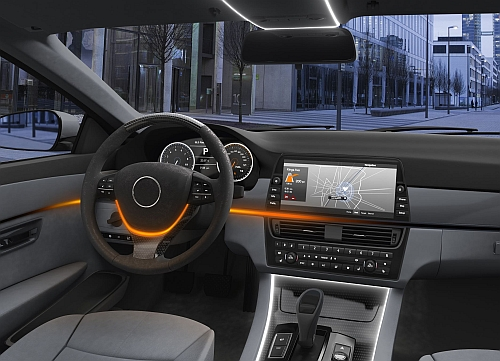 One of the many possible and changing looks that the Osire E4633i can create. (Image credit: Rendering by Osram OS.)

These being the fledgling days of the IoT (Internet of Things) era in which LED chips will be connected to the Internet and to other information networks, the uses will include various communication scenarios.

Let’s say, for example, a motorist gets so enraptured in the interior lighting that they have neglected to keep their eyes on the road.

In those cases, the lights “could use dynamic and color effects to draw the driver’s attention back to the traffic in good time,” Pawlik said.

Osram has not yet revealed the names of any car manufacturers it might be working with. But it did say that the Osire E4633i LED module will provide auto companies “with countless design options.”

The design with its serial bus supports control both of individual chips and of groups of chips, Osram said, noting that “this provides simple implementation of uniform color rendering across the entire color space as well as dynamic light cases.” The system can automatically change red settings in response to changes in temperatures, it noted.

Osram said the small footprint of 4.6×3.3×0.7 mm allows implementation in smaller spaces than what has been possible with existing, more rudimentary chips.

As Osram explained, “Light will become an integral part of the passenger cell, taking on functional and design-specific tasks. Previously static light, which could only be switched on and off, has now been given a dynamic dimension.”

Which is something that could change the face of automotive man caves forever.

As the landscape of automotive lighting has changed, Osram has emerged as a major player in developing advanced LED components for applications such as adaptive drive beam headlamps, like the LED module it engineered in a joint project with Fraunhofer Institute for Reliability and Microintegration (IZM), Infineon, Hella, and Daimler with funding from the German Federal Ministry of Education and Research (BMBF). That later was followed up with the release of the Smartrix automotive headlamp module that combines multiple emitters with silicone optics and driver electronics to simplify the integration of cutting-edge headlamps by automakers. The company has publicly announced its intentions to continue R&D and commercialization of LED technology into applications such as automotive lighting, as well as other light-enabled technologies in vehicles. For example, at this year’s CES (Consumer Electronics Show), Osram revealed a smart autonomous vehicle in collaboration with Rinspeed, which utilizes a number of LEDs and laser light sources for infrared sensing and driver awareness, positioning, iris scanning, UV sanitizing, and lighting the interior. The road in front is seemingly endless and full of possibilities. — Carrie Meadows