Things won’t get better this fiscal year after all, the company decides. But it’s confident in its long-term strategy. 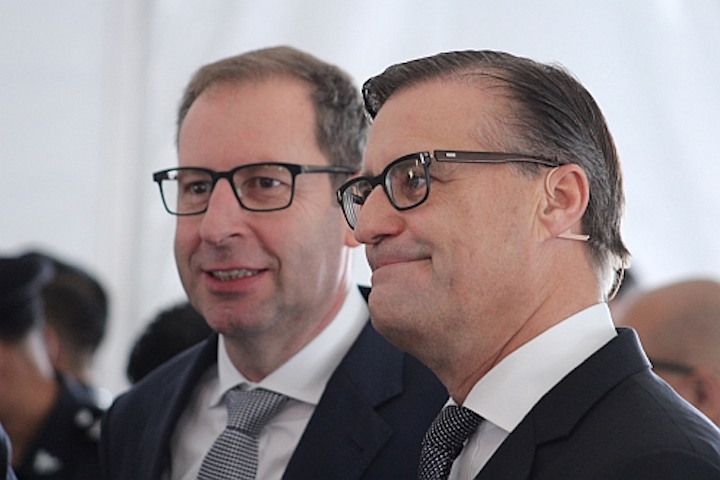 Things won’t get better this fiscal year after all, the company decides. But it’s confident in its long-term strategy.

Forgive us if you think we’ve written this already: Osram today issued a financial warning.

In what has become a familiar occurrence over the last year, the world’s second-largest lighting company this time said that revenue for the fiscal year 2019 ending Sept. 30 will decline by between 11% and 14%, and that adjusted EBITDA margin for the year will fall well below the previously anticipated range, between 8% and 10% rather than between 12% and 14%.

The new outlook reverses what hopes Osram had for an uptick. Osram had previously forecast a modest increase in revenue between 0% and 3%. And in early February, when the Munich-based company reported a 15% dive in comparable sales for the first quarter, it held out a glimmer of optimism that order volume could pick up in the second half of the year.

But it dashed those possibilities today.

“Osram previously had put its guidance under the condition that order intake would need to revive meaningfully in support of the second half of the fiscal year 2019,” the company said in what it called an ad-hoc statement. “At this point in time, such a development has not occurred, nor is it expected for the rest of the fiscal year.”

Making matters, worse, Osram also said free cash flow for the year would be negative between €50 million ($56.2M) and €150M ($168.5M), rather than the positive mid-double-digit million cash flow it had previously foreseen. 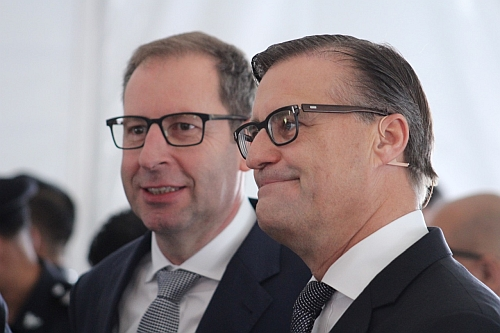 It can’t be easy running a major lighting company these days. Osram chief technology officer Stefan Kampmann (l) and CEO Olaf Berlien would know. The company’s Opto Semiconductors group has been hit especially hard by general economic challenges which set in soon after Osram opened its state-of-the-art chip plant in Kulim, Malaysia, where this picture was taken in November 2017. (Photo credit: Mark Halper.)

As was the case in its first-quarter tumble, Osram said the setbacks have hit it across the board in main markets including automotive, general lighting, and mobile devices.

“This has led to significant inventory buildups, particularly in China,” Osram said. “In addition, business development is facing an ongoing impact by the general economic slowdown. Geopolitical uncertainties continue to negatively impact demand.”

And while all three of its main business units are suffering — Opto Semiconductors (OS), Digital Systems, and Automotive (all of which sell in varying degrees to automotive companies) — OS has been especially hard hit. That comes as an extra blow given that less than 18 months ago Osram opened a sprawling new €370M ($415.6M) LED chip plant in Kulim, Malaysia, as the first phase in a €1 billion ($1.12B) scheme. Osram is now reducing the headcount at its chip factories, including Kulim.

Osram issued two financial warnings in its last fiscal year, and has now already issued two this year. In late January it warned about the first quarter fall.

Efforts to transform the company into more of a high-tech digital operation continue to come at a financial cost. The burden has led to the possible acquisition of Osram by private equity firms Carlyle and Bain Capital.

In today’s statement, it gave a gloomy assessment of its ongoing second quarter, noting that “according to figures available so far, the second quarter of fiscal 2019 is expected to see a revenue decline of roughly 15% on a comparable basis when compared to previous year, combined with an adjusted EBITDA margin in the mid to higher single digit range.”

The company’s second quarter ends on March 31, and Osram is scheduled to report results on May 8.

Still, Osram continues to press ahead with efforts to apply digital lighting in new and promising fields, such as its recent commercialization of a horticultural lighting system, and its decision to invest in Berlin-based indoor positioning specialist Beaconinside.

The company confirmed these efforts again in its recent statement. “Osram’s strategy with its focus on optical semiconductors, the automotive sector, and digital applications remains intact irrespective of the current market weakness and will provide for a sustainable and attractive return profile over the longer term,” the company said.