A jeweler with 110 retail stores throughout the UK is at the forefront of converting its lighting to LEDs, writes TIM WHITAKER. 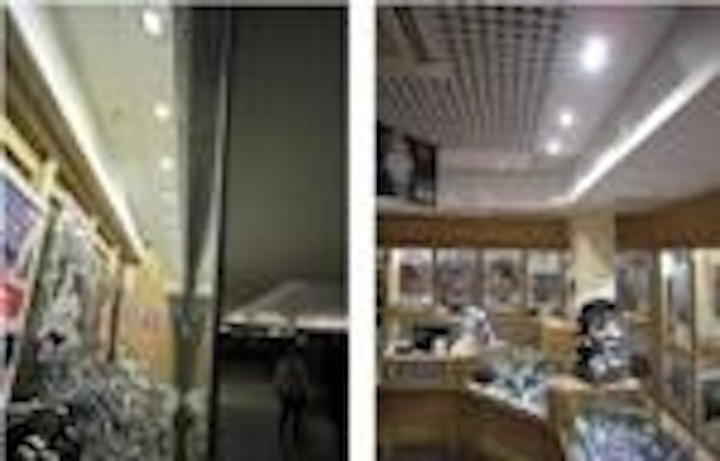 This article was published in the April/May 2012 issue of LEDs Magazine.

View the Table of Contents and download the PDF file of the complete April/May 2012 issue, or view the E-zine version in your browser.

F.Hinds, a family-owned jewelry business that operates a chain of 110 retail stores throughout the UK, is part-way through a program to convert all its lighting to LED fixtures. In collaboration with Brillianz Electronic Systems Ltd, a UK-based LED lighting specialist, F.Hinds has refitted a number of stores and is already seeing the benefits of reduced energy and maintenance costs, as well as a very positive impact on sales especially in its diamond business.

A number of F.Hinds stores have already been converted to LED lighting, but only in the retail areas; however, the company will shortly open another store which has LED lighting throughout, including the backroom offices used by staff. This is thought to be a first, at least in the UK.

The long-term financial benefits of switching to LED lighting were the main reason for moving ahead with the project. “We are very careful about how we spend our cash,” said Neil Hinds, a director of the company. “The payback on this lighting initiative, together with the improved merchandise illumination and reduced maintenance, was a compelling argument to proceed straight away.” Given the need for high-quality illumination in the stores, it’s clear that cost savings were not the only factor. “The lighting had to be better, otherwise we wouldn’t have made the change,” said Hinds.

The company had been looking at LED lighting for several years but had not been able to find suitable products to meet its requirements. A new store in High Wycombe opened in August 2009 but was initially fitted with metal-halide lamps. “We wanted to open the store with LED lights, but they were not ready in time,” said Neil Hinds. “Following the busy Christmas season in 2009, the store underwent a refit in 2010.”

F.Hinds worked very closely with Brillianz, based in Welwyn Garden City, to develop several different types of LED lights that are now being installed throughout the F.Hinds portfolio. Prior to the start of the program, the company had a total of more than 4800 metal-halide (MH) downlights, a further 1500 halogen track lights, and around 3 km of fluorescent lighting for undershelf and case lighting. Overall, the company’s direct electricity charges for lighting amounted to around £267,000 (approx. $424,000) in 2010.

Following its refit, most of the lighting in the High Wycombe store is provided by BayLite R48 recessed LED downlights from Brillianz. These are positioned above the sales counters, above the central retail space in the store, and in the windows where they are angled to illuminate the window displays (Fig. 1).

The 48W downlights have an output of over 3000 lm, and were designed to replace 75W MH lamps. Each downlight has a removable light engine that contains six multi-chip LEDs. Linear reflectors create a rectangular beam pattern of 45° × 60° (Fig. 2).

“Getting 3000 lumens into a recessed LED downlight was a serious technical challenge and required advanced technology from several continents to be integrated into what for the customer just needed to be a simple form, fit and function replacement for the existing luminaire,” said Gerry Howley, one of Brillianz’s two owner-directors.

The downlights use active cooling via a Nuventix SynJet, which delivers targeted pulses of air directly to the LED light engine’s heat sink. This maintains a heat sink temperature of less than 55°C. Brillianz says that the efficiency is 85 lm/W (measured as hot lumens, i.e. at the operating temperature of the LED), and that the CRI exceeds 80.

A color temperature of 4200K has been chosen throughout the F.Hinds retail chain. “We have tested some lights with a more bluish-white light, but these will be replaced,” said Neil Hinds.

The High Wycombe store also uses VisiLite linear LED lighting systems supplied by Brillianz. In other stores, F.Hinds has used BayLite track-mounted spotlights that contain similar light engines to those in the downlights, and are compatible with standard Concord Lytespan track fittings. These are available as a T32 Trac (32W) model with a minimum of 2000 lm, equivalent to a 50W MH lamp, and the T60 Trac (60W), which can replace 100W MH lamps and has an output of 4500 lm.

Elsewhere, notably in backroom areas in the stores, F.Hinds is replacing 600x600-mm ceiling fixtures (known as troffers in the US) that are typically fitted with two fluorescent tubes. Brillianz has supplied 58W LED panels that deliver 4000 lumens (Fig. 3).

F.Hinds is part-way through its retrofit program that will eventually see LED lights in all of its stores. Neil Hinds said that in some cases the lighting retrofit takes place when the entire store is refurbished, while in other cases only the lighting is replaced. Some stores have been given priority where there is “problem” lighting, said Hinds, for example where there are lights in high ceilings that are particularly expensive to relamp.

Maintenance costs, including the cost of buying and fitting new lamps, are essentially zero for LED fittings over a 10-year life span. This forms part of the overall cost saving that can be achieved with the LED retrofit. However, the bulk of the saving comes from reduced electricity cost, due the lower power consumed by the light fixtures and also to the reduced use of air conditioning to maintain the desired store temperature. Fig. 4 shows the 10-year estimates for overall savings by lamp type. The total operational savings per lamp are estimated to be 62%, 82% and 57% respectively for MH, halogen and fluorescent.

Of course, a substantial capital outlay is required to replace all the lights throughout the stores. This is likely to be in the region of £1.5 million ($2.25 million) in total. The BayLite R48 products, for example, cost about twice as much as the metal-halide lamps they replace. However, once operational costs over a 10-year life span are taken into account, Neil Hinds estimates that each LED unit will save approximately £300 ($500) over that period, compared with MH lamps. The payback is somewhere between two and four years, depending on the specifics of the individual store and various other project-related factors.

The LED lighting installed by F.Hinds qualifies for Enhanced Capital Allowance; this scheme allows all of the capital cost of certain types of equipment to be written off against taxable profits in the year of purchase. For larger companies, the energy savings can be used to reduce carbon tax liability, but this does not (currently) apply to F.Hinds. Even so, the company estimates that the LED lighting project will reduce its carbon footprint by 4900 tons (Fig. 5).

From outside the High Wycombe store, the lighting appears uniform and attractive, striking a good balance between highlighting the products in the window displays without being obtrusive or overwhelming. The retail space inside is welcoming but not too bright. Compared with adjacent stores in the small, low-ceilinged mall, the lighting stands out and has attracted envious comments from other store managers, said Jim Knight, the store's manager.

For a store that sells jewelry items, and in particular gemstones such as diamonds, lighting is of course crucially important, particularly when the customer takes a close look at the product. “We have seen a major benefit in diamond sales,” said Neil Hinds. “With LED lighting, the sparkle is greatly enhanced, and this has a very positive impact on the customer.” This is especially the case with the BayLite downlight, which has six points of light in each light engine. This magnifies the sparkle effect as light reflects from the diamond’s facets. “Any movement of the diamond or the customer’s head relative to each other creates sparkle,” said Hinds.

F. Hinds’ diamond buyer Andrew Hinds is similarly delighted by the quality of the lighting. “The stores’ new lighting is even better than I expected and is a significant improvement on the previous lighting – the diamonds really sparkle and the watch faces are brighter,” he said.