The international Zhaga consortium has published Book 3, its first specification that is available to non-members, as well as Book 1, which contains general information and definitions. 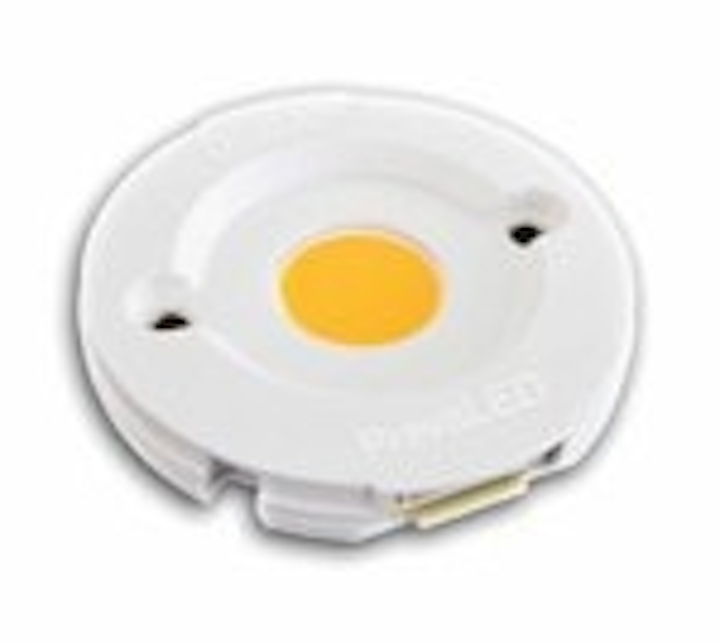 Zhaga, the international lighting-industry consortium that is developing specifications for the interfaces of a variety of LED light engines, has unveiled its first specification for public viewing. Zhaga Book 3, which defines the interfaces for spotlight-type LED light engines, is now available on the Zhaga website. The current version is edition 1.2, and updated versions will be posted periodically.

Specifically, Book 3 defines the interfaces between a luminaire and a non-socketable LED light engine (LLE) with separate electronic control gear (ECG). The light engine has a round disc shape, with a maximum height of 7.2mm and a typical diameter of 50mm. One example is Osram’s Prevaled Core Z2 LED module (Fig. 1).

The recent LEDs Magazine article entitled “Zhaga writes the book on LED light engine specifications” discussed Zhaga in detail, including the specifications defined in Books 2 through 7 (see Fig. 2). Since then, Book 8 has been added; this is similar to Book 2, in that both cover socketable LLEs with integrated ECG, which are suitable for downlight applications. However, in Book 2 the LLE has a 65-mm base, while in Book 8 the base is 85 mm.

During their development phase and when first finalized, the Zhaga specifications are confidential and available only to members of the Zhaga Consortium. However, Zhaga’s policy is to publish each specification once certification is available (from third-party providers), and once the first products with the Zhaga logo have been sold by Zhaga members.

The current situation is that testing and certification is possible for Book 2 (downlight engine) as well as Book 3 (spotlight engine). In late August 2012, Zhaga said that 40 products have been certified to be compliant with either Book 2 or Book 3. These products include LED modules, LED light engines, LED luminaires, and holders.

As well as Book 3, Zhaga has also published “Book 1: Overview and Common Information,” which gives an overview of Zhaga terminology, plus common information that aims to explain the general aspects of the five interfaces.

This specification defines aspects that are common in multiple Zhaga interface specifications, such as common definitions; the mechanical interface of separated electronic control gear; and the generic aspects of the thermal interface.

As stated above, Book 3 defines the interface specifications for an LED light source that is used for spot lighting and other applications that need a point light source.

It covers LED modules that are intended to be screwed to the heat-sink base of a luminaire by an OEM luminaire manufacturer, and to be controlled by separate electronic control gear.

The LLEs covered by Book 3 have a round disc-shaped aperture with a diameter between 9 mm and 23 mm.

The light output is essentially Lambertian, allowing the luminaire optics to have a defined input to shape the light distribution to the needs of the application.

An optional accessory included in this specification is a locking ring to allow screwless mounting of the LED module.