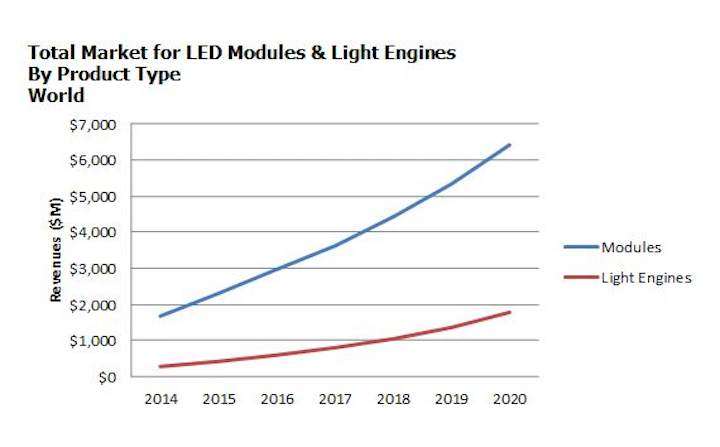 According to Strategies Unlimited, LED modules will comprise the majority of the market through the forecast period; however, light engines are forecast to have a higher compound annual growth rate (36% 6-year CAGR compared to 25% 6-year CAGR for modules). Luminaire manufacturers are still learning about the cost and space saving benefits of using a light engine (which includes driver electronics) and currently prefer to purchase the components separately. It is predicted that as more manufacturers are educated and smart/connected lighting continues to grow, the light engine market will also grow. In 2014, revenues for LED modules were $1.69 billion and for light engines were $284 million. 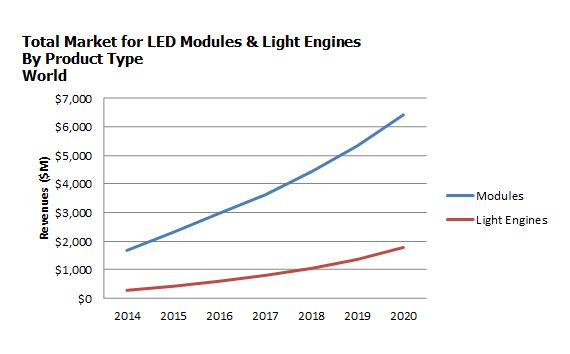 Downlights have the highest penetration of LED modules and light engines but will see the slowest growth due to socket saturation and long lifetimes. Residential downlights currently make up half of all LED downlight shipments, and a high proportion of these are using a third party module or light engine due to their ease of use and lower average selling price. Troffers are another form factor where modules have a high penetration percentage; they often come in standard sizes (2x2 or 2x4, for example) and have less integration, which brings the price down. According to Stephanie Pruitt, Senior Research Analyst at Strategies Unlimited, “Apart from downlights and troffers, the penetration of modules and light engines into other luminaire form factors is around one-third. All of the module and light engine manufacturers that I spoke with reported that 70% or more of their business was done on a custom basis. Luminaire manufacturers still want that degree of freedom over the design. As more LED luminaires are adopted and more standard ‘off the shelf’ module and light engine products come into the market, that’s when we’ll start to see much higher penetration rates and unit growth.”

Average selling prices for modules and light engines saw steep declines – mainly stemming from the packaged LED market. Customers saw the price declines for packaged LEDs and expected the same for modules and light engines – despite the prices of the other components not declining as fast. However, LEDs are no longer the most expensive part of the BOM for a lamp or luminaire, and many manufacturers saw smaller margins in an attempt to keep up with low cost products or contract manufacturers. High bays and street lights had slower price declines and higher overall ASPs due to these products having more integrated modules and light engines – with lenses, heat sinks, and other secondary optics.

North America has the highest penetration of third party modules or light engines, and Europe is following behind at a slower pace. There are many tier 2 and tier 3 players in these countries that do not have the manufacturing or engineering know how to build these products in house. Many tier 1 players prefer a module solution due to the often better reliability and performance that can be achieved as well as the increased time to market. China and Japan have the smallest penetration of third party modules or light engines due mainly to the already low cost of manufacturing these parts in house in China and the desire to have control over the entire design process in Japan.