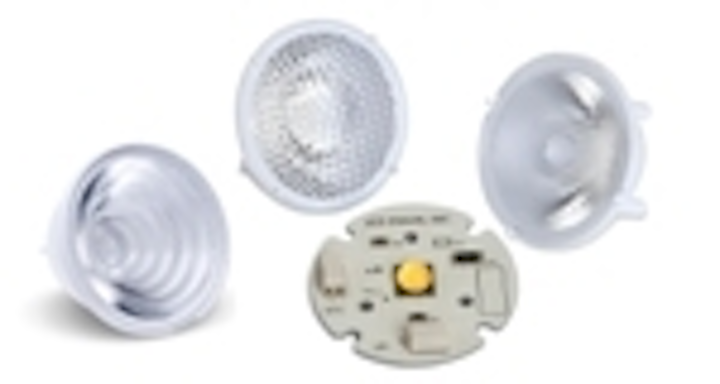 This article was published in the February 2012 issue of LEDs Magazine.

View the Table of Contents and download the PDF file of the complete February 2012 issue.

Directional LED modules and lamps can be designed in different ways to provide the desired result of placing the light where it is required for a specific application, while minimizing glare and background light. This article compares two alternate approaches, one based on a compact emitter in combination with a secondary lens using total internal reflection (TIR) optics, and the other based on a chip-on-board array in combination with a reflector.

However, as this article also emphasizes, comparisons of LED modules and lamps by power consumption or luminous efficacy – or even the nominal beam angle – may give a completely inaccurate impression of the performance of these light sources.

It is easy to compare the performance of incandescent lamps; products conform to common, long-established physical formats and they emit light in very similar ways. For a given AC grid voltage, the primary way of comparing incandescent lamps is by their power rating in watts, and consumers have a clear idea how much more light is likely to come from a 100W lamp than from its 60W counterpart.

The emergence of LED lamps has made things a bit more complicated, not least because the industry has tried to explain the performance of LED lighting in incandescent terms. Specifications usually include the power consumed in watts and how that equates to an equivalent incandescent lamp. The luminous efficacy value (lm/W) is also quoted.

However, LED lamps have a more complex construction than incandescent ones. Many factors – such as the type of emitter, the substrate upon which the emitter is mounted, the driver electronics, the optical focusing mechanism, and the housing – all contribute to differences in performance.

Using luminous efficacy to compare LED lamps can be totally misleading, particularly when it comes to directional lighting. The two directional LED modules compared below have similar specifications, including efficacy, but more detailed evaluation reveals quite staggering differences in performance in real-world applications.

The need to focus

High-power LED emitters are ever-improving light sources for a broad range of lighting applications. However, for the vast majority of applications, such as interior spot- and down-lighting, roadway lighting, architectural lighting and stage lighting, the emitters alone cannot deliver enough light intensity to a target. This is because an LED light source emits a Lambertian light distribution whereby the apparent brightness to an observer is the same, regardless of that observer’s position. Light is therefore spread far too widely.

In order to direct light onto a target, it is necessary to use secondary optics, which collimate the light into a controlled beam illuminating the targeted area. Collimated light rays propagate in parallel, although perfect collimation is not possible due to diffraction and the finite size of the emitter. However, the smaller the light source, the more effective the collimating optics can be. Besides collimating light, secondary optics can also be designed to improve color uniformity and light distribution within the target area.

To describe the ability of secondary optics to collimate a beam, we often refer to viewing angle or full width at half maximum (FWHM); this is the angular width of the beam whose intensity at the edge is half the maximum intensity in the center of the beam. This angle is a useful way to classify optics, but it doesn’t always explain discrepancies between different optical platforms. In practice, depending on the optical design, optics with identical viewing angles can differ quite a lot in the intensity and quality of the beam.

Many lighting applications – in particular high-bay lighting, street lighting, and stage lighting – demand high illumance (measured in lux) at a distance, and that means both a high-power emitter and a highly collimated beam. In an industry with such high standards, it is essential that each emitter be properly matched with appropriate secondary optics.

Often, the physical size of the emitter limits the optical options. This is particularly true of certain chip-on-board (COB) or array emitters; they emit from such a large area that the only optical solution is to surround the emitter with a reflective surface.

Reflectors are common with omnidirectional lights such as incandescents, but in LED designs they carry a key disadvantage: a majority of light rays originating from the center of the emitter pass out of the system without ever touching the reflector. This means that even in a narrow-flood reflective system, where the view angle is in the 20-25° range, a significant portion of the light strays wide of the target. And it isn’t simply lost; worse, it is very visible as glare and background light, causing distraction and discomfort at the expense of center-beam lux.

Contrast this with the optical opportunities for a compact, very high lumen-density emitter. These emitters are powerful enough to provide the necessary luminous intensity (measured in lumens) and small enough to be enveloped with a TIR lens to guide virtually all of the radiated light toward the target. An inexpensive, efficient, well-designed lens in a low-profile form factor is only possible with such very bright, very compact emitters.

The lenses in Fig. 1 produce viewing angles from 8° to 45° when used with compact emitter packages (all products shown are from LED Engin). The secondary optics not only direct light to the target but provide high optical efficiency and color uniformity while maintaining compact form factors.

In order to compare the performance of TIR- and reflector-based approaches, two LED modules were evaluated. One module used an LED Engin compact LZC emitter with a 24° TIR lens, while the other used a reflector-based module containing a COB array. In both cases, the optics had the same dimensions (45-mm diameter, 25-mm height). Both modules were designed to have a FWHM of 24° and their specifications were matched as closely as possible, particularly the luminous intensity (lm) and efficacy (lm/W).

Table 1 illustrates three key differences in performance between these modules. For example, the TIR lens system delivered twice the central lux of the reflector module, with 2× the “lux efficacy” measured in lux/watt.

This is perhaps more visually evident in the 3D graph in Fig. 3, where the profile of the TIR-based module shows a smooth gradient toward the center beam, but the reflector solution shows a more “spiky” center beam with a significant portion of the reflector’s energy coming from outside the peak.

In fact, 28% of the radiated energy from the reflector design falls outside of a 60° cone, contributing to glare, while for the TIR design this is only 6%.

In real-world applications, comparisons of LED modules and lamps by either power consumption or luminous efficacy may give a completely inaccurate impression of the performance of these light sources.

What’s needed is a new way of defining luminous performance that takes into account the percentage of lux-on-target that’s delivered, not the total lumens produced by the module. True “lux efficacy” could perhaps be adopted to describe the useful lumens produced by an LED module i.e. the light which illuminates the target area.

Other factors such as color uniformity and light distribution still have to be considered, but lux efficacy would be a better measure than anything currently available. The comparison between modules with reflector designs and TIR lenses clearly demonstrates the need for such a measure.